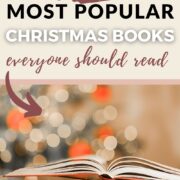 Explore the ten most popular Christmas books of all time for toddlers, kids, and adults to read and have the most festive holiday season.

I created this post in an effort to narrow down the dozens of great holiday reads you can choose from to only the most famous Christmas books you will want to squeeze in during this short holiday season.

The Most Popular Christmas Books

A list of the most popular Christmas books would not be complete without A Christmas Carol, a story about how the bitter old Ebenezer Scrooge is transformed by the spirit of Christmas after a visit from the ghost of his former business partner and the Ghosts of Christmases Past, Present, and Yet to Come, including Bob Cratchit and Tiny Tim of course.

Indulge even further in the festive literature with these A Christmas Carol quotes that have become classics in their own right.

How the Grinch Stole Christmas by Dr. Seuss

Undoubtedly, you have at least heard of the modern classic Christmas book How the Grinch Stole Christmas, about spreading Christmas cheer, even to the meanest curmudgeon of all. With the furry and cartoonish green Grinch at its core, it’s definitely one of the best Christmas books for families to read aloud together each year with toddlers and young children.

In a Holidaze by Christina Lauren

In a Holidaze is a holiday rom-com that became SUCH a hit, especially because Christina Lauren is such a popular modern romance author duo. It starts after a Christmas in which a lot goes wrong for Maelyn at her family’s usual “Christmas with friends” at a snowy Utah cabin. She leaves wishing to find happiness, and it seems like things can’t get worse until a car crash occurs.

Maelyn then begins to relive her Christmas vacation as if it were Groundhog Day.  But, the others insist a car crash never occurred, and that she just woke up from a bad dream.  As Maelyn navigates Christmas all over again in her “dazed” state, she tries to fix everything that went wrong the first time she experienced Christmas.  And, of course, there’s a love triangle and some holiday steaminess in store!

In a Holidaze is a perfectly light and immersive read about the power of holiday wishes.

One Day in December by Josie Silver

And, Reese Witherspoon’s book club selection One Day in December was, and remains, a massive bestseller over several holiday seasons now. Reese describes it as a mix of Love Actually, Bridget Jones, and Serendipity, and I wholeheartedly agree.

It’s about a British woman who sees her dream man outside of a bus she’s riding in, and later finds out he’s her best friend’s new boyfriend. The story follows their lives for the next ten years, and a lot happens in that time, although I won’t spoil any storylines.

Sometimes books involving love triangles can make the characters unlikeable, but everyone remained likable to me in One Day in December, and it was a really delightful December read.  I recommend this book if you love the movies mentioned above.

If addition to being one of the most classic Christmas movies of all Miracle on 34th Street is a bestselling, award-winning book that has sold millions of copies.

An elderly man named Kris Kringle fills in for Santa in Macy’s annual Thanksgiving Day parade, becoming a popular regular at the store. But his claim that he is the real Santa leads to a court battle with the power of belief at the heart of it.

Did you know you can READ the beloved ballet based on Nutcracker and Mouse King?! It’s the timeless, magical story of a wooden doll, the Nutcracker, who becomes alive to fight the evil seven-headed Mouse King after a Christmas party, which reminds people of all ages about the magic of the Christmas holiday every year both on the page and at the ballet.

The Polar Express has been one of the most popular children’s Christmas books for decades now, beloved by so many who re-read it each holiday season, including me.

Savor the stunning illustrations as you follow a boy who travels to the North Pole to learn the power of believing in the spirit of Christmas as he finds a special gift under the Christmas tree.

Skipping Christmas is the modern classic holiday-themed book by the massively popular author John Grisham, and it’s the book upon which the cute Christmas movie Christmas With the Kranks is based.

Luther and Nora Krank decide to skip everything Christmas one year. Come December 25, they’re setting sail on a Caribbean cruise. But, skipping Christmas isn’t easy in their town or their family … and their plan comes to a head with some humor on the side.

Grisham truly delivered a well-written comedic holiday classic that celebrates the chaos and community that are so characteristic of the holidays.

Twas the Night Before Christmas by Clement Clarke Moore

Filled with memorable Christmas book quotes, the #1 bestseller Twas the Night Before Christmas has been read as one of the best bedtime stories on Christmas Eve, particularly by generations of families to feel the magic of Santa’s work while awaiting his arrival.

Winter Street is a bestselling holiday book series that has remained steadily popular over the years, as it hails from bestselling “beach read” author Elin Hilderbrand. This particular Christmas novel begins a four-part story of family drama and holiday spirit mixed together.

Kelley Quinn owns the Nantucket Winter Street Inn and is the proud father of four grown children, all of whose personal lives are in a state of chaos. The oldest, Patrick, is a hedge fund manager dealing with a white-collar crime. Bartender Kevin has a secret relationship with the Inn’s housekeeper. Teacher Ava can’t get her dream boyfriend to commit. And Bart, the youngest, and the only child of Kelley’s second marriage to Mitzi, is fighting overseas in the Marines.

Christmas approaches, and Kelley walks in on Mitzi kissing the Inn’s Santa Claus, bringing all of the families’ drama to a head. It becomes up to Kelley’s first wife, famous news anchor Margaret Quinn, to attempt to save Christmas.

The three remaining books in the Winter series are Winter Stroll, Winter Storms, and Winter Solstice. I recommend this book series if you like lighthearted family novels.

Now you know all the most popular Christmas books to read this year.

If you enjoyed this post on the most popular Christmas books, you will love these posts: