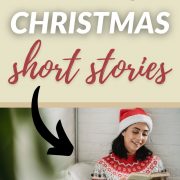 If you're looking to get in the holiday spirit, these are the best Christmas short stories for adults to make you feel festive in no time with both traditional and modern tales.

As always, when creating a "best of" list, it's difficult to narrow down the options. Here, I focused on authors that you may already know and love and, if an author had several Christmas stories (which is the case for several authors), I chose to pick just one main one to highlight to get you started reading their Christmas stories.

For example, I featured Hans Christian Anderson for the popular The Little Match Girl, but he is also known for fairy tales like The Fir Tree. And Louisa May Alcott has written SO many short Christmas stories.

I also included some beloved Christmas short stories that are geared toward children, because they are so timeless and often still read by adults. For example, I read The Polar Express each December!

And I tried to (generally) exclude poems because the focus here is stories. But, I did include nonfiction because they can read more like stories.

Below are answers to a few frequently asked questions, followed by all the best Christmas short stories for adults.

Tip: since many of these books are so old, you can read them for free!

What is the most popular Christmas story of all time?

The classic A Christmas Carol by Charles Dickens is the most popular Christmas story of all time.  Written in 1843, it has been read by generations of adults and children, and it has been adapted many times for plays, movies, and tv, making it the most beloved story to read each holiday season.

What are the most popular Christmas stories?

A few of the most popular Christmas stories are A Christmas Carol, How the Grinch Stole Christmas, The Polar Express, The Gift of the Magi, and Twas the Night Before Christmas.

What are good Christmas stories?

A few good Christmas stories to recommend are A Christmas Carol, The Polar Express, A Christmas Memory, and The Little Match Girl.

What Christmas story do you read on Christmas Eve?

On Christmas Eve, adults and children alike read Twas the Night Before Christmas, in preparation for the impending arrival of Santa Claus by Christmas morning.

At Christmas Time by Anton Chekhov

At Christmas Time is a two-part story that begins with an illiterate woman, who hires a man to write a letter to her estranged daughter, wishing her a merry Christmas. In the second part, the daughter, living a life different than she imagined, receives the letter.

The Burglar’s Christmas by Willa Cather

The Burglar’s Christmas follows William Crawford on Chicago's cold streets, contemplating his career failures in life. He decides to try one more: thief. But, when the lady of a house he attempts to burgle catches him, he is forced to confront the life choices that led him to that moment and hope for redemption.

A Child's Christmas in Wales by Dylan Thomas

A Child's Christmas in Wales ponders a classic Christmas past with the warmth of a family gathering, the charm of a mistletoe-decked home, the coziness of cats by the fire, the joy of children celebrating, and the magic of gifts.

A Christmas Carol is the most famous Christmas story of all time. Undoubtedly, you are familiar with the story of the curmudgeon Ebeneezer Scrooge, who gains a new lease on life after visits from the ghosts of Christmas, past, present, and future, and spends the holiday redeeming himself to co-worker Bob Cratchit and family, including the memorable Tiny Time.

For more, read these quotes plus a full summary of A Christmas Carol.

Christmas Day in the Morning by Pearl S. Buck

In Christmas Day in the Morning, Rob looks back on his childhood and remembers giving an unusual gift that filled him with true Christmas joy. Now, fifty years later, he realizes he can still give a meaningful gift from his heart.

A Christmas Memory by Truman Capote

A Christmas Memory is one of my absolute favorite Christmas-themed books to which I return and re-read each year.

It's the nostalgic story of a boy who lovingly makes fruitcakes each Christmas season with his elderly cousin, earning its status as an American holiday classic.

For more, read my full review of A Christmas Memory.

In A Christmas Sermon,  Stevenson writes while convalesced from a lung problem at Lake Sarnac in the Winter of 1887. He speaks on questions of death, morality and man's work in life: “To be honest, to be kind — to earn a little and to spend a little less, to make upon the whole a family happier for his presence.”

The Dead by James Joyce

The Dead is a beautiful story about a married couple attending a Christmas-season party at the house of the husband’s two elderly aunts, which causes the wife to make a shocking confession. It takes inspiration from a family gathering held every year on the Feast of the Epiphany.

The Elves and the Shoemaker by The Brothers Grimm

The Elves and The Shoemaker is naturally about a shoemaker who is secretly helped at night in his incomplete work by some little elves.

The First Christmas of New England by Harriet Beecher Stowe

The First Christmas of New England is one of several of Stowe's holiday works, for those who want to keep the spirit of Christmas alive with a heartwarming tale.

The Gift of the Magi by O. Henry

The Gift of the Magi is about a young married couple trying to buy Christmas gifts for each other with little money to spend. It's the classic sentimental tale that offers a lesson about gift-giving.

A Hint for Next Christmas by A.A. Milne

From the author of Winnie the Pooh, A Hint for Christmas is an essay about small gifts and rethinking the custom of Christmas cards.

How the Grinch Stole Christmas by Dr. Seuss

Undoubtedly, you have at least heard of the modern classic Christmas book How the Grinch Stole Christmas, about spreading Christmas cheer, even to the meanest curmudgeon of all.

Related post: How to Make a Grinch Christmas Tree

A Kidnapped Santa Claus hails from the author of The Wizard of Oz and shares the story of demons like Selfishness, Envy, Hatred, Malice, who have captured Santa and secured him to a wall to stop him from delivering toys on Christmas Eve. Can he be saved in time?

A Letter From Santa Claus by Mark Twain

A Letter from Santa Claus was written from Mark Twain, as Santa, to his three-year-old daughter in 1975.

The Little Match Girl, the tale once referenced on Gilmore Girls, is the heartwarming story of Adriana and her grandmother, who travel with the hope of a better life. When Adriana's dreams are shattered, she's left with only a flute, a box of matches, and her faith in God.

A Merry Christmas by Louisa May Alcott

A Merry Christmas shares several nostalgic American stories about the holiday from the renowned author of Little Women.

Related post: How to Have a Merry Little Women Christmas

Did you know you can READ the beloved ballet based on Nutcracker and Mouse King?! IT's the timeless, magical story of a wooden doll, the Nutcracker, who becomes alive to fight the evil seven-headed Mouse King.

Published in 1876, Old Christmas truly does celebrate nostalgia. It contains five Christmas stories of an of old-fashioned family Christmas at a quaint English manor.

Irving himself is credited with helping to shape the Christmas holiday in America.

Papa Panov's Special Christmas is about a wish to worship the Christ Child and give Him the finest pair of shoes Papa Panov has ever made, and a joyful Christmas about the best way to celebrate the Savior's birth by following His example.

The Polar Express is my most favorite childhood book, which I re-read each holiday season. Savor the stunning illustrations as you follow a boy who travels to the North Pole to learn the power of believing in the spirit of Christmas as he finds a special gift under the Christmas tree.

The Tailor of Gloucester by Beatrix Potter

The Tailor of Gloucester is the story of a poor, tired tailor struggling to survive in his cold workshop over a hard Winter and working to complete for the Mayor of Gloucester's wedding on Christmas Day. Luckily, some very generous mice are there to help him, even in the presence of his cat.

Twas the Night Before Christmas by Clement Clarke Moore

The #1 bestseller Twas the Night Before Christmas has been read as one of the best bedtime stories on Christmas Eve, particularly by generations of families to feel the magic of Santa's work while awaiting his arrival.

Those are the 24 best Christmas short stories for adults to feel festive this holiday season -- one short read for each day of Advent!

If you want to read more than one of these Christmas short stories in one book, check out:

I just discovered this web site. Its full of ideas for Christmas reading. Some of these books I have at home. I find this delightful.