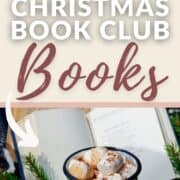 Get the best Christmas book club reads to pick for your December book clubs to have discussions filled with holiday spirit.

If you’re so busy and overwhelmed that you’re thinking of skipping Christmas book club, think again!

I created this post in an effort to narrow down the dozens of great holiday reads you can choose from for your book club. As a book blogger who’s read so many good Christmas books for a book club, I focused this list on the books I believe offer the most to talk about with others during the holiday season, from books that are nostalgic to humorous, and even those you can compare to their famous film adaptations.

Why it makes a good book club book: Most people know the story of A Christmas Carol from its countless written and film adaptations but have not yet read the book. It’s short and beautifully written, and it offers the ability to discuss what readers took away from the full text versus their perceptions of it.

A list of the best books about Christmas would not be complete without this Christmas short story. We all know the story of A Christmas Carol, and how the bitter old Ebenezer Scrooge is transformed in the spirit of Christmas after a visit from the ghost of his former business partner and the Ghosts of Christmases Past, Present and Yet to Come, including Bob Cratchit and Tiny Tim of course.

You can also use these A Christmas Carol quotes at your book club meeting.

A Christmas Memory by Truman Capote

Why it makes a good book club book: A Christmas Memory gets my personal highest rating of all these holiday-themed books for book club because it’s brief and so utterly nostalgic and captivating. Readers can discuss the meaning of Christmas and what (and whom) makes them feel nostalgic.

The short story A Christmas Memory is a short and beautiful tale about a young boy in rural Alabama, looking back with nostalgia about his elderly friend.

They save their pennies throughout the year to make 30 fruitcakes as soon as fruitcake weather arrives. They share them with only the most deserving persons, including the one they send to the White House each year, wondering if the President serves it thereafter.

Together, they share more holiday cheer as the old friend comes to find their time together to have a deeper meaning.

For more, check out my full review of A Christmas Memory with book pairings.

A Christmas Story by Jean Shepherd

Why it makes a good book club book: The compilation of autobiographical works that make up A Christmas Story the book can be compared to the popular movie of the same name.

A Christmas Story is the nostalgic tale in which young Ralphie’s family represents the average American family having a disastrous, but memorable, Christmas season, in which, most notably, he yearns for a rifle gun.

Why it makes a good book club book: Hercule Poirot’s Christmas satisfies those book clubs who prefer to read and chat about mysteries and thrillers, and who guessed “whodunnit.”

In Hercule Poirot’s Christmas, Agatha Christie’s famed investigator is tasked with a Christmas Eve murder at a family reunion in which everyone seems to have a reason to hate the deceased man.

Holidays on Ice by David Sedaris

Why it makes a good book club book: Holidays on Ice is one of the best Christmas book club reads to discuss because it’s a realistic and comedic look at the holiday season. Readers can share their own funniest holiday stories to get a good laugh at a busy time of the year.

Holidays on Ice is a festive collection of tales, featuring the irreverent style of humor that is the trademark of Sedaris, including the diaries of a Macy’s elf (my favorite), being a child locked out in a snowstorm, the nonsensical Christmas traditions around the world, and more!

In a Holidaze by Christina Lauren

Why it makes a good book club book: In a Holidaze is one of the best Christmas novels for book clubs who love to read romance books. This one maintains the feel of a romantic comedy and allows readers to discuss time travel in the context of the holiday season.

In a Holidaze is a holiday rom-com that starts after a Christmas in which a lot goes wrong for Maelyn at her family’s usual “Christmas with friends” at a snowy Utah cabin. She leaves wishing to find happiness, and it seems like things can’t get worse until a car crash occurs.

Maelyn then begins to relive her Christmas vacation as if it were Groundhog Day.  But, the others insist a car crash never occurred, and that she just woke up from a bad dream.  As Maelyn navigates Christmas all over again in her “dazed” state, she tries to fix everything that went wrong the first time she experienced Christmas.  And, of course, there’s a love triangle and some holiday steaminess in store!

Last Christmas in Paris by Hazel Gaynor and Heather Webb

Why it makes a good book club book: Last Christmas in Paris is great for historical fiction book clubs and those who want to discuss the Christmas seasons of their ancestors.

As the Great War begins, Evie thinks that it will be over by Christmas. Her brother Will and his friend Tom leave for battle, and the group plans to meet for a holiday in Paris when the war is over.

But the war drags on. Last Christmas in Paris is a World War I story and a love story told almost entirely through letters and telegrams, with sprinkles of Christmas mixed throughout and penultimate Christmas events at the end.

Last Christmas in Paris also evokes themes of family, love, belief, and hope, which are the spirit of Christmas.

One Day in December by Josie Silver

Why it makes a good book club book: A modern bestseller, One Day in December earns its place for as a holiday “must read” your book club members will want to check off their lists. Love triangles like the one this book features also always offer a lot to talk about!

One Day in December was a Reese Witherspoon book club selection, described as a mix of Love Actually, Bridget Jones and Serendipity (and I wholeheartedly agree).

It’s about a British woman who sees her dream man outside of a bus she’s riding in, and later finds out he’s her best friend’s new boyfriend. The story follows their lives for the next ten years, and a lot happens in that time, although I won’t spoil any storylines.

Why it makes a good book club book: Royal Holiday is a quick and delightful read that caters to diverse book clubs and book clubs that prefer middle-aged protagonists. You can also discuss the swoon-worthy details of the royal festivities over a cup of holiday tea.

When Vivian accompanies her daughter on a work trip to style a royal duchess in England, she meets the handsome private secretary of the Queen and is offered a very personal tour.

As Christmas approaches, their flirty friendship turns into a mistletoe kiss, and later a fling to ring in the New Year. As the clock ticks away on the year and the “holiday,” will this fling turn into something even more in the new year?

Why it makes a good book club book: Winter Street is the first book in the Winter Street series of four books, so if book club members like it, they can stay busy with the remainder of the series during the rest of the holiday season. It also offers the storylines of several family members to talk about.

Winter Street is just about everything you could want in a Christmas novel by author Elin Hilderbrand — family drama and holiday spirit mixed together.

Kelley Quinn owns the Nantucket Winter Street Inn and is the proud father of four grown children, all of whose personal lives are in a state of chaos. The oldest, Patrick, is a hedge fund manager dealing with a white-collar crime. Bartender Kevin has a secret relationship with the Inn’s housekeeper. Teacher Ava can’t get her dream boyfriend to commit. And Bart, the youngest, and the only child of Kelley’s second marriage to Mitzi, is fighting overseas in the Marines.

Christmas approaches, and Kelley walks in on Mitzi kissing the Inn’s Santa Claus, bringing all of the families’ drama to a head. It becomes up to Kelley’s first wife, famous news anchor Margaret Quinn, to attempt to save Christmas.

Those are the best Christmas book club reads to discuss before the new year.

If you enjoyed this post on the best Christmas book club books, you will love these posts: