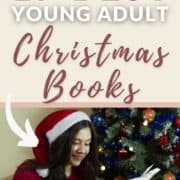 Get the best Young Adult Christmas books for teens (and even adults) for yourself or a gift. Grab a cup of hot cocoa and relax because you’ll love indulging in these best Christmas-themed books for young adults, which are filled with lighthearted and youthful holiday content and themes.

Want to pick something quickly? Here are my top picks:

10 Blind Dates is one of the most popular Christmas books for teens. After Sophie’s parents head South for Christmas, her boyfriend breaks up with her, and she retreats to her grandparents’ house with her festive extended family.

There, her family sets her up on 10 different blind dates over 10 days. As she embarks on this dating adventure, her ex also seeks a second chance.

The Afterlife of Holly Chase by Cynthia Hand

The Afterlife of Holly Chase is a modern Young Adult adaptation of A Christmas Carol.

Five Christmases ago, seventeen-year-old Holly Chase was visited by three Ghosts who showed her the errors of her ways. Unlike Scrooge, however, she didn’t change her ways, and she died.

Now she’s the Ghost of Christmas Past, and she’s not happy about it… until she meets the “Scrooge” she visits this year.

All I Want for Christmas by Wendy Loggia

All I Want for Christmas is a Christmas romance book about one very festive girl named Bailey, who wants nothing more than a kiss under the mistletoe.

She thinks athletic Jacob isn’t the one, but that the mysterious Brit named Charlie may be it. Is she right?

Blame it On the Mistletoe by Beth Garrod

For fans of the movie The Holiday, Blame it On the Mistletoe is about a social media star who swaps lives with a Christmas-loving fan. Both find themselves in the midst of “meet cutes” in the process.

Carols and Chaos by Cindy Anstey

Carols and Chaos is one of the best Christmas books for young adults who are fans of Jane Austen and/or Downton Abbey.

Kate is a lady’s maid in 1817 at a country estate, and she’s just as busy as Matt, the valet for guests, the Steeple brothers. Soon, Kate and Matt are swept up in a counterfeit scheme at the estate, as well as feelings for each other.

A Castle in the Clouds by Kerstin Gier

A Castle in the Clouds is one of the coziest, most mysterious YA Winter romance books to take you beyond Christmas Day. It’s set at a grand old hotel in the Swiss mountains on New Year’s Eve at their famous ball.

There, hotel intern Sophie is hard at work when she finds herself in the middle of an adventure that places both her job and her heart at risk.

A Christmas Carol is the most classic of all classic Christmas books for young adults and, really, people of all ages. It’s the famous story of the bitter old Ebenezer Scrooge, whose holiday spirit is transformed after a visit from the ghost of his former business partner and the Ghosts of Christmases Past, Present, and Yet to Come, including Bob Cratchit and Tiny Tim of course.

It’s exquisitely written, yet also easy to read and well-suited for teens.

The Christmas Clash by Suzanne Park

The Christmas Clash earns its place as one of the best YA Christmas books because it’s set at a mall during the holiday season. Having worked at a mall many Christmas seasons myself, it has a special place in my own heart. It also gets points for being diverse.

Chloe’s Korean family and Peter’s Chinese family operate rival restaurants in the food court and for Christmas, Chloe’s a photographer at the mall’s Santa Village, while Peter works at the virtual reality North Pole.

When the mall’s about to be sold to developers and eviction notices are handed to their families, though, they must band together in the spirit of Christmas to save their family’s livelihoods.

Dash & Lily’s Book of Dares is the first of three good Christmas books for young adults (#2 is The Twelve Days of Dash & Lily and #3 is Mind the Gap, Dash & Lily), as well as a Netflix series from the authors of Nick & Norah’s Infinite Playlist.

Lilly is a sixteen-year-old who left a notebook full of challenges at a bookstore, and Dash is the guy who finds it and accepts the challenges, setting them on a whirlwind holiday romance (via notebook) across New York City.

The question is whether they will connect in real life.

Holiday Princess is a Princess Diaries book for fans of the bestselling series. It’s filled with holiday customs and traditions from around the world, and it gives lots of seasonal ideas from gift-giving to details about the royal Genovian Fabergé advent calendar.

The Holiday Switch by Tif Marcelo

The Holiday Switch is one of my personal favorite YA Christmas novels. Lila is embarking on her last Winter break of high school in her small New York town by working at the local inn, which happens to be the setting of a renowned holiday film, while also writing an anonymous book blogger.

There, Type A Lila keeps butting heads with the innkeeper’s nephew, Teddy, her new co-worker. But when they accidentally switch phones, they realize they’ve each been hiding things that may bring them together after all.

Read this one if you love Gilmore Girls and/or Christmas movies.

Let it Snow is a compilation of three holiday romances written by three bestselling authors, as well as a Netflix film.

After a Christmas Eve snowstorm blasts Gracetown with feet of snow, one person ventures outdoors, setting off a chain of life-changing events, including a risky shortcut, a race to the Waffle House, and a lovesick barista.

Midnight in Everwood by M.A. Kuzniar

Midnight in Everwood is a magical retelling of The Nutcracker.

It’s Christmastime in Nottingham, 1906, where Marietta wishes to be a ballerina, but instead, in obligated to marry in the New Year.

After a neighbor and mysterious toymaker creates a theater for her final performance, she finds herself in a world filled with magic.

My True Love Gave to Me by Stephanie Perkins, et al.

My True Love Gave to Me is a collection of twelve holiday stories by twelve bestselling Young Adult authors, offering something for everyone, whether you’re celebrating Christmas, Hanukkah, the Winter Solstice, or Kwanzaa.

So, This is Christmas by Tracy Andreen

So, This is Christmas is one of the best modern Christmas romance books for teens to read this year. Finley has returned home from boarding school, where she finds her life in her small town, Christmas, Oklahoma, to be a mess. Her parents have separated, her ex is dating her best friend, and her enemy is working at her grandmother’s inn.

There, she must show a boy the magic of “Christmas” in this holiday story of family, friendship, and love.

The Vanderbeekers of 141st Street by Karina Yan Glaser

Technically, The Vanderbeekers of 141st Street is more of a Middle-Grade novel than a Young Adult novel, but it’s such a cute story that I couldn’t help but include it for those who want something on the younger side. After all, even as an adult, I thoroughly enjoyed it!

The Vanderbeekers are a family of five children, two parents, and a few furry pets living in a Harlem brownstone. The week of Christmas, their landlord, whom they refer to as “The Beiderman” decides not to renew their lease, which saddens the children. Together, they come up with plans of action to change the landlord’s mind.

It’s filled with colorful characters, adorable illustrations, and a heartwarming plot. And, if you really like it, the good news is it’s the first in a series of several stories chronicling the charming family.

What Light by Jay Asher

What Light hails from the author of Thirteen Reasons Why. Sierra is a teen living two lives — one on her family’s Christmas tree farm in Oregon and the other in California, where they sell their trees each December.

One year, she meets Caleb, who has a troubled past in which he made a terrible mistake, and she finds herself fighting for his redemption… and his love.

Whiteout is a Black teen romance novel from six mega-bestselling and award-winning authors. In snowy Atlanta at Christmastime, twelve teens band together to pull off one epic apology in the face of a storm.

Those are all the best Young Adult Christmas books.

If you enjoyed this post on the best Young Adult Christmas books, check out these posts: