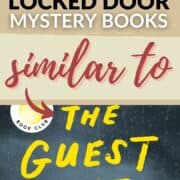 Get the best books like The Guest List by Lucy Foley, for more "locked door mysteries" that will have you guessing "whodunnit" amongst the cast of characters in a secluded setting, like a remote island or snowed-in cabin.

The Guest List involves a seemingly happy, posh wedding on a remote, secluded island off the coast of Ireland, but when the bash of the year has officially begun, the power goes out, and a body is discovered. What follows is a classic "whodunit" amongst the wedding party, staff, and guests.

This style of book, a "locked room mystery," just hooks you in as a reader and has you playing a Clue-like game of figuring out who in one particular group of people did it, where, why, and how, as you compulsively turn the pages.

What does the phrase locked room mystery refer to?

A "locked room mystery" is a fictional type of thriller novel that involves a crime or crimes (usually, murder) that occurs amongst a small group of people that are shut off from the outside world, in a setting like a remote island or snowed-in cabin. Based on the secluded setting, the criminal(s) necessarily must be amongst the small group of people.

In other words, it's as if a room were locked with all the people in it prior to the occurrence of a crime taking place amongst them inside the room.

Popular authors who often write this type of mystery include Agatha Christie, Ruth Ware, and Lucy Foley -- all of whose books you will find below.

Below is the quick list of books like The Guest List followed by more details about each one to help you choose the one or ones perfect for you to read right now.

What should I read if I liked The Guest List?

And Then There Were None by Agatha Christie

And Then There Were None was named a Great American Read by PBS, and it is the most similar to The Guest List (in my opinion) on this list.

After ten people, each of whom is hiding and fearing something, are invited to an isolated mansion on the isolated Indian Island, their host never arrives. They have only each other for the duration of their stay, but, one by one, these guests share their darkest secrets...and die.

It's up to the reader to follow the breadcrumbs to try to determine who did it and whether anyone will survive.

Related post: Learn more about where you can get free Agatha Christie books.

The Club by Ellery Lloyd

The Club is a Reese's book club pick that uniquely takes place at a super guarded and luxurious club for celebrities on an island off the English coast.

It starts with what appears to be a death, then recaps the days leading up to the launch party, filled with behind-the-scenes tensions amongst the owners, staff, and even the celebrities.

As the body count piles up, it's clear this is one club in which the members may not be able to get out.

The Escape Room by Megan Goldin

The Escape Room is literally a "locked door mystery" as four competitive Wall Street colleagues participate in a teambuilding exercise in an escape room they can only hope to get out of alive.

Trapped in the dark with only each other, their darkest deeds are revealed, and they will learn which one of them is willing to kill in order to survive.

The Hunting Party by Lucy Foley

The Hunting Party is the book Lucy Foley wrote before The Guest List.

In the December days that follow Christmas, a group of thirtysomething college friends meets up to celebrate the New Year at an isolated estate in the Scottish Highlands.

As they reminisce about the past decade, however, the weight of their secrets presses upon them.

And when a historic blizzard cuts them off from the outside world, one will end up dead and another will be the cause of this death, all by New Year's Day.

Murder on the Orient Express by Agatha Christie

THE MOST WIDELY READ MYSTERY OF ALL TIME!

Similar to And Then There Were None is Christie's other bestselling "locked door mystery" -- Murder on the Orient Express. The Orient Express is the famed European luxury train on which a slew of memorable guests has boarded one snowy evening.

But, just after midnight, a snowdrift halts the train to a stop. And by morning, an American tycoon is found stabbed to death in his compartment. What's more is that his door was locked...from the inside.

Renowned fictional detective Hercule Poirot must sleuth the (unexpected) conclusion from the range of various characters, all full of their own secrets.

Related post: learn more about where you can get free Agatha Christie books.

From the author of Big Little Lies comes Nine Perfect Strangers, in which nine different people travel to a remote health resort called Tranquillum House in order to better themselves for a variety of reasons, including grief, addiction, relationship trouble, and of course, secrets.

But, it becomes more challenging than they ever could have anticipated. The strange, yet charismatic, owner and director will make them question whether she can actually solve their problems, especially as the owner receives threats and it's learned that a prior retreat participant died.

No Exit by Taylor Adams

No Exit is a suspenseful thriller in which four strangers are trapped at a remote Colorado rest stop in a blizzard.

When Darby, who was on her way to visit her dying mother, uncovers a kidnapped child in the car next to hers, she must determine who the kidnapper is and how to save the rest of them. It's the fight of her life, with twists you won't see coming as your heart races.

One by One by Ruth Ware

Reminiscent of Agatha Christie, One by One is a "locked door mystery" Winter-themed book in which eight colleagues at a London tech start-up become snowed in at a ski chalet in the French Alps.

When an avalanche cuts the co-workers completely off from the outside world, the group begins to shrink, as four characters die "one by one" and fear overtakes the survivors.

As the tension builds, ulterior motives and dark secrets are slowly revealed in this satisfying thriller.

The Paris Apartment by Lucy Foley

The Paris Apartment is the book Lucy Foley published after The Guest List.

Jess has just left her job and is broke and alone, desperate for a fresh start. Her half-brother Ben agrees to let her stay with him at his Parisian apartment, but, when she arrives, he's missing.

As Jess encounters Ben’s eclectic and unfriendly neighbors, she begins to question his disappearance more and more, and they all become suspects.

Reckless Girls is a quick and propulsive thriller involving one island, six visitors, and countless secrets. It's the kind of book you can read in one sitting.

Deep in the Pacific Ocean, Meroe Island has an eerie history of shipwrecks, murder, and even cannibalism. And when six twentysomethings head out on a leisurely trip there, the island's history haunts them as one goes missing and another one turns up dead.

The Sanatorium by Sarah Pearse

The Sanatorium is another atmospheric Reese's book club pick. At an isolated hotel (formerly a sanatorium), high up in the Swiss Alps, Elin is taking a break from her detective job, as she continues to process her brother's death years prior, in order to visit with her estranged brother and his new fiance.

When a snowstorm hits and access to the hotel is cut off, her soon-to-be sister-in-law goes missing. Panic ensues as the characters embark on a journey of twists, turns, more missing persons, and even deaths unfold.

Like it or not, Elin must return to her detective roots if there's any hope to uncover the truth about this creepy hotel.

They All Fall Down by Rachel Howzell Hall

They All Fall Down is another "vacation gone wrong" trope. Miriam receives a surprise invitation to sail to a luxurious Mexican island and, while it sounds like a dream, it turns into a nightmare when she learns her travel companions have been brought to the island under false pretenses and are hiding secrets.

In the expansive mansion deep in the forest, one by one, they all fall down.

The Turn of the Key by Ruth Ware

The Turn of the Key is a popular Ruth Ware book in which Rowan finds a live-in nanny job at a remote home in the Scottish Highlands with a picturesque family.

But, her dream job becomes a nightmare when a child dies and she finds herself in prison awaiting her murder trial. She writes to her lawyer, trying to explain the odd events in the home that led to her incarceration and prove her innocence.

An Unwanted Guest by Shari Lapena

An Unwanted Guest takes place deep in the woods of the Catskills at a seemingly relaxing inn. But when a blizzard cuts off the electricity, one of the guests ends up dead.

It looks like an accident...until another guest dies, and the survivors must struggle to survive while forced to hunker down with each other at the same time.

The Woman in Cabin 10 by Ruth Ware

The Woman in Cabin 10 is one of the most popular and beloved thrillers by novelist Ruth Ware. Travel journalist Lo believes she has received the assignment of a lifetime when she steps aboard a small, luxury cruise in the North Sea for a week.

But cold winds and dark skies foreshadow something more ominous is on the horizon. Lo believes she witnessed a woman thrown overboard, but all of the passengers remain accounted for.

As the ship continues to sail, twists and turns unravel in this intense "locked door" setting.

Shop the full list in my Amazon shop now.