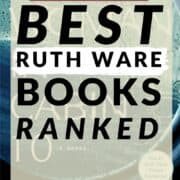 Learn about all the best Ruth Ware books based on these rankings and reviews of each and every one of her popular psychological thriller, mystery, and suspense novels, so you can decide exactly which one of these book recommendations is best for you to read first or next.

Ruth Ware is a #1 New York Times bestselling British author, who debuted her first novel, In A Dark, Dark Wood in 2015. She has been described as a modern-day Agatha Christie, and she has described her own fiction books as being “full of murder, family secrets, toxic friendships and things that go bump in the night.” (Source) Most prominent to me are her uses of isolated settings and fairly large casts of characters.

I had been aware of her books for many years before I picked one up. And when the New Year began this January, I wanted to start it with a moody and Wintery book, so I picked up One by One, a locked room mystery about murderous crime a ski chalet in the French Alps. I was HOOKED, and I decided at that moment to read and rank her entire catalog by the end of the year.

Now that I have finished each and every Ruth Ware book, I rank the best Ruth Ware books below, including my personal rankings, as well as other readers’ rankings on GoodReads and Amazon, so that you have a more complete picture of how her thrillers stack up beyond my own perspective, and what type of reader would like each one best.

First, learn about the Ruth Ware books in order, then get details of the best Ruth Ware books ranked by me and readers worldwide. Lastly, download a printable PDF of all of Ruth Ware’s books to track your reading.

How many Ruth Ware books are there?

As of 2023, there are eight total Ruth Ware novels.

What order should I read Ruth Ware books?

You can read Ruth Ware’s books in any order, as none of them are part of a series, nor do they contain the same characters or plotlines.

However, if you want to read the Ruth Ware books in order, below is a chronological listing for you to follow:

Is there a new Ruth Ware book?

The newest Ruth Ware book is Zero Days, which will be published on June 20, 2023. It’s about a woman who’s racing against time to find her husband’s murderer.

What is Ruth Ware’s best book?

Reasonable minds may differ; however, The Woman in Cabin 10 is by far the best-selling Ruth Ware book, with the popular themes that thriller readers worldwide most crave — a locked room mystery and an unreliable narrator — akin to mega bestsellers like Gone Girl and The Girl on the Train.

The full list of best Ruth Ware books ranked (except Zero Days, which has not yet been released):

In a Dark, Dark Wood

Best for those looking for an unputdownable thriller

In a Dark, Dark Wood is about the bachelorette party from H-E-double hockey sticks. A lonely writer named Leonora is surprisingly invited to an old friend’s pre-wedding bash at a glass-encased home deep in the English countryside, and she makes an agreement to attend alongside another friend.

The bachelorette party storyline is told in the past, and in the present, Leonora is staying in the hospital after an accident, being suspected of murder, and trying to remember what happened and how she got there.

It turns out that Leonora’s old friend is actually engaged to someone from her own past, and thus begins a deadly spiral of events.

This was an exceptional thriller and debut novel in my humble opinion! I absolutely could not put it down, and Leonora’s “present” situation kept me completely glued to the pages to figure out her past — both recent and distant in time.

And, since bachelorette parties can make for strange bedfellows, I thought this was the most perfect, unique setting for a psychological thriller involving an unlikely group of characters forced to come together and deal with each other in an isolated location. It has all the markings of a great, suspenseful read.

Best for fans of locked-room mysteries

In One by One, eight coworkers from a trendy London tech start-up get snowed in at a luxurious ski resort in the French Alps, as an avalanche cuts the group off from the outside world.

It may seem cozy, but as the hours pass without any sign of a possible rescue, the group begins to dwindle, as four characters die “one by one” in this “locked room” mystery book, in which ulterior motives and dark secrets are slowly revealed as tensions mound.

This atmospheric book kept me totally engaged and guessing “whodunnit” (and who would stay alive) as I read along in the “dead” of Winter myself. It remains one of the best Ruth Ware books for me.

Related post: Full Summary and Character Guide for One by One

The Woman in Cabin 10

Best for fans of unreliable narrators and locked room mysteries

The Woman in Cabin 10 is probably the most beloved thriller by novelist Ruth Ware, and many would indeed call it the best Ruth Ware book based on its sales and comparisons to massively successful psychological thrillers like Gone Girl and The Girl on the Train.

Travel journalist Lo is reeling from a home burglary, and she believes she has received the assignment of a lifetime when she steps aboard a small, luxury cruise ship in the North Sea for a week.

But something more ominous is on the horizon, as a drunk and anxious Lo believes she witnessed a woman thrown overboard. Yet, all of the passengers remain accounted for and her concerns are generally dismissed.

As the ship continues to sail, a wave of twists builds up in this intense “locked room” setting. I adored the premise of this book, and how it weaved in other “missing women” plotlines.

It’s one of those mega-bestselling, unputdownable thrillers everyone should read, but at the same time, you need to let go of your logic with this one, as there are many plot points that don’t totally add up. With a bit more editing to answer the questions of critical readers, it could have been exceptional, but it’s still well worth the read.

Best for fans of toxic friendships and dark academia

In The Lying Game, when human remains are found in a small coastal village, a resident woman named Kate texts her old boarding school friends that she needs them.

This intriguing opening scene sets the stage for the story of four girls, who were known for their incessant lies and expulsion from school after Kate’s dad, a beloved art teacher, committed suicide.

They reconvene as adults and, while Kate remains guarded, the remainder of the group, led by new mother Isa, slowly uncover the truth behind the lies and, ultimately, they must decide whether to lie or tell the truth going forward.

The Turn of the Key

In The Turn of the Key, Rowan Caine finds a live-in nanny job at a remote mansion called Heatherbrae House in the Scottish Highlands with a picturesque family.

But, her dream job becomes a nightmare when a child dies and she finds herself in prison awaiting trial for murder. She writes to her lawyer, trying to explain the odd events in the home that led to her incarceration and prove her innocence.

I think what makes this book so popular amongst readers is that the reader immediately knows Rowan is in prison. It really keeps you hooked to learn how she got there and whether she will be convicted. Also, the “haunted mansion” deep in Scotland makes it feel very ominous.

While it wasn’t my personal favorite Ruth Ware book, there are definitely some surprising twists, and I think most Ruth Ware fans will enjoy this spooky mansion mystery, especially as a moody Fall read.

The It Girl uncovers the truth about the death, a decade earlier, of Oxford’s popular student, April Clarke-Cliveden, a woman of “two faces” as many “it” girls are under the stressors of a high-pressure academic environment at a young age.

Her friend, Hannah, is now married to another of their friends, Will, and expecting a baby. But, when April’s convicted killer dies in prison and a journalist presents evidence he may have been innocent, Hannah’s “nesting” stage of life becomes interrupted by a desperate search for the truth.

Hannah reconnects with the remainder of her college group of friends to shed new light on the past, and the results offer twists along the way to a thrilling conclusion.

I know many people who loved this book, but I personally found it to be way too long to remain invested in the storyline, which many other readers did agree about. So, the overall reviews are mixed, and I recommend this one to fans of dark academia who don’t mind

The Death of Mrs. Westway

Best for fans of slowly burning mysteries and family secrets

The Death of Mrs. Westway is an ominous and mysterious novel about a tarot card reader named Harriet who believes she has wrongly received an inheritance letter. After she attends the funeral for the deceased elderly woman, though, she starts to believe there’s something more hiding beneath the surface.

The closer she gets to the family, the more she finds mysterious connections to her own life. These suspicions unravel slowly to reveal the truth, and the story builds to one very suspenseful and thrilling conclusion.

The reason this particular novel is at the bottom of my personal ranking is because of how slowly it burned. I became bored by the story until it reached the end, which still was a pretty epic conclusion that did keep me on the edge of my seat. So, I would recommend it more for those who don’t mind the more delayed pacing.

Those are the best Ruth Ware books ranked in order.

To recap and help you decide what to read first or next, here’s a quick guide:

Printable PDF of the List of Ruth Ware Books in Order