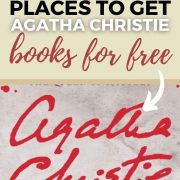 If you want to dive deep into Agatha Christie’s catalog but don’t want to pay to do so, this post shares 13 great places online to read, print, listen to, and/or download free Agatha Christie books in the form of ebooks, audiobooks, PDFs, and more.

I also share with you summaries of 5 of her most popular novels, to help you decide what to read first or next.

Agatha Christie is the best-selling novelist in world history. First published in 1920, her published books are only outsold by The Bible and William Shakespeare. Throughout her life, she wrote 66 detective fiction novels and 14 collections of short stories, along with the world’s longest-running play – The Mousetrap. Her books have sold over a billion copies in English and a billion copies in translation.

(For more about Agatha Christie’s life, including her mysterious disappearance, check out my review of The Mystery of Mrs. Christie.)

Below are 13 great places to get free Agatha Christie books now.

If you want physical Agatha Christie books for free, head to your local library. You can also get Agatha Christie ebooks and audiobooks from your library via the Overdrive app and/or the Libby app.

Project Gutenberg is an online library of over 60,000 free ebooks. You can download them on your Kindle and/or read them online. This library contains the world’s great literature with a focus on older books in the public domain for which the U.S. copyright has expired.

Some Agatha Christie books are available for free on Audible if you are a Premium Plus subscriber, like And Then There Were None.

I found several Agatha Christie titles available for free to digitally read or listen to on Online Read Free Novel. This includes the ever-popular And Then There Were None and Murder on the Orient Express!

FreeEbooks.net has a few free Agatha Christie books available for digital download, including the beloved The Murder of Roger Ackroyd.

Bookfi has ONE HUNDRED Agatha Christie books available for free download. Read the popular Death on the Nile and catch up on all your favorite Hercule Poirot books.

Standard Library has five free Agatha Christie books, which you can send right to your Kindle:

Internet Archive has 141 Agatha Christie titles available for free, but not all are immediately available, and some can only be borrowed for 14 days.

BookAudio.online has TONS of Agatha Christie books you can listen to online.

Study Novels has a few dozen Agatha Christie books that you can read online or listen to, including The ABC Murders and several more of her most popular titles.

Juggernaut is unique in that it has free books by Agatha Christie in non-English languages.

Of course, reasonable minds may differ when choosing the best of anything. However, the following books are generally considered to be five of the most popular Agatha Christie books. If you are unsure where to start or what to read next, peruse these five book summaries first.

Murder on the Orient Express

Murder on the Orient Express is the most widely read mystery novel of all time!

By night, the famous Orient Express train is stopped in its tracks by a snowdrift. By morning, millionaire Samuel Edward Ratchett is found dead in his cabin, having been stabbed a dozen times with his door locked from the inside. One thing is clear — one of his fellow passengers is the murderer.

Isolated by the storm with only each other, detective Hercule Poirot must find the killer among a group of Ratchett’s enemies, before the murderer strikes again in this wildly classic “whodunnit.”

And Then There Were None

And Then There Were None has been named a Great American Read by PBS.

Ten people, each of whom has something to hide and something to fear, are invited to an isolated mansion on Indian Island by a host who, to their surprise, never arrives. On the island, they are cut off from the world and only have each other as companions. But, one by one, as the guests share their dark secrets, one by one, they die.

Who among them is the killer and will anyone survive in this locked room mystery book? This is a MUST read.

Death on the Nile

In Death on the Nile, the tranquility of a luxury cruise along the Nile River is shattered by the discovery that Linnet Ridgeway has been shot and killed. She was young and beautiful, and she seemingly had it all.

Hercule Poirot recalls an earlier outburst by a fellow passenger: “I’d like to put my dear little pistol against her head and just press the trigger.” Yet under the harsh rays of the Egyptian sun, nothing is what it seems. There’s love, jealousy, and betrayal in this timeless book.

The Murder of Roger Ackroyd

The Murder of Roger Ackroyd was voted by the British Crime Writers’ Association as the “Best Crime Novel of all Time.”

Roger Ackroyd knew too much. He knew that the love of his life poisoned her terrible first husband. He also suspected that someone was blackmailing her. Then came the tragic news that she took her life by way of an apparent drug overdose.

The evening post brought Roger one more bit of information, but before he could finish reading the letter, he was killed.

Roger’s friend Hercule Poirot must come to town and take over the investigation in this brilliant mystery.

In The ABC Murders, a serial killer is on the loose, and he’s working his way through the alphabet, leaving the entire country is in a state of sheer panic.

A is for Mrs. Ascher in Andover, B is for Betty Barnard in Bexhill, C is for Sir Carmichael Clarke in Churston. And with each murder, the killer becomes more confident.

Those are the best places to get Agatha Christie books for free, as well as summaries of 5 of her most popular books to help you decide what to read first or next.

Pin this post to Pinterest so you can refer back to it when you want to read some of the greatest mystery novels of all time for free.

I've read the edition of AliceAndBooks: https://www.aliceandbooks.com/author/agatha-christie/64 and it's pretty nice!