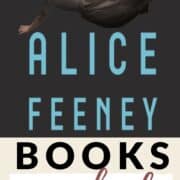 Explore all the Alice Feeney books in order and ranked to help you decide what to read first of next from the New York Times bestselling modern female British thriller author.

This Fall, I devoured her entire catalog for spooky season, and below I share with you all the Alice Feeney books in order of publication date with brief summaries and reviews, followed by a ranking of all Alice Feeney books (based on both my own opinion and avid book reviewers on GoodReads), and finally, answers to frequently asked questions about Alice Feeney’s books.

Below are all the Alice Feeney books in chronological order of publication date:

Sometimes I Lie is a stunning, very shocking and open-ended debut book that will leave you wanting more from both the story and from Alice Feeney.

Don’t you just love a good old-fashioned holiday season mystery?! Jumping from pre and post-accident timelines, as well as revealing childhood diary entries, this book will undoubtedly take you by surprise and make you question all the characters and their motives.

It kept me up past minute finishing it and then Googling everything I could find dissecting THAT ending. All of the above make it an absolute must-read for fans of thrillers.

I Know Who You Are is the story of a famous actress named Aimee Sinclair whose husband goes missing, and she is the prime suspect.

In fact, Aimee is hiding something — her past. It was both troubled and traumatic, and it’s come back to threaten her present and future.

Meanwhile, she’s also dealing with a stalker and rumors of cheating with her co-star.

Through dual timelines, the truth about Aimee (and her husband) is slowly revealed in an ending that is truly unlike any others.

While this book was as interesting and easily readable as Feeney’s other books, the ending was too icky for me, so it ultimately fell flat in my personal opinion. I’d say to read it only if you’ve read the others already and/or are open to a big, unpleasant surprise.

His & Hers is one super twisted and diabolical book. It’s no wonder psychological thriller readers love it.

Anna is a newsreader who’s been recently demoted and looking for a comeback, and Jack is a detective on a murder case. Anna is reluctant to cover the case, as she knew the victim, and so Jack is suspicious of her involvement. As more women die, however, Jack himself becomes a suspect.

Both Anna and Jack are hiding secrets, and they aren’t the only ones. There’s a lot more to the story, and it’s all very dark and sinister, in this complex plot with oodles of twists along the way.

While this wasn’t my personal favorite Alice Feeney book (a bit too dark), I totally get why readers love it and turn the last page feeling mindblown. Feeney takes a lot of different puzzle pieces and fits them all together extraordinarily well here.

Rock Paper Scissors is one book that exquisitely delivers unique plot points and twists that are almost guaranteed to surprise you.

Work-obsessed screenwriter Adam and his wife Amelia retreat to the snowy Scottish highlands for a weekend retreat that they intend to either save or end their marriage. Adding strains on the marriage are Adam’s inability to recognize faces and his grief over the tragic death of his mother.

Intermixed with the present storyline are ten wedding anniversary letters to Adam slowly revealing the past and threatening not just their marriage, but their lives, in the present.

The twists (yes, that’s plural) are, indeed, twisted, and I truly don’t think anyone would be able to see them coming. Feeney is an absolute master at crafting twists that are so precise and unfamiliar, and it shows in this particular novel really well. The pacing in the middle felt slow to me, and it lacked some believability, but I did also love the haunting feeling of the ending.

Overall, I thought it was a really satisfying cozy mystery that felt totally unexpected, leaving the reader to ponder what a person really knows about his or her spouse.

Daisy Darker is a locked room mystery book for fans of Agatha Christie, and it is a true masterpiece of a modern thriller!

Daisy is a woman with a heart condition who claims to have died several times in her life, and her beloved grandmother, Nana, is an author who loved and wrote about her. Nana has now gathered the family at her tiny island estate in Cornwall for her 80th birthday, where she reads her will.

Cut off from the world, a storm rages, and the dysfunctional Darker family ominously discusses how they would each murder someone. Then, at the stroke of midnight, Nana is found dead and, each hour, the death toll increases.

This may sound like a familiar plot, but the mystery includes riddles and old home movies that show the secrets of the Darker family are truly unlike any others.

And the ending provides the kind of unexpected shock that makes you want to go back and re-read everything. It’s a five-star read in my opinion, with a unique plot that’s really exquisitely executed and a truly satisfying conclusion you won’t see coming, especially if you listen on audio (based on my conversations with other readers and my own experiences).

So, which Alice Feeney book should you read first or next? Below are my personal rankings followed by those of avid book reviewers on GoodReads to further help you decide.

What genre is Alice Feeney?

Alice Feeney is a British psychological thriller novelist most known for truly shocking twists and intricately planned storylines. Her books generally have dual/multiple timelines and are generally on the shorter side as well, with quick, short chapters you can easily binge.

What order should I read Alice Feeney books?

Alice Feeney’s thriller books are all standalone books and can be read in any order.

What should I read if I like Alice Feeney?

Now you know all the details of the Alice Feeney books in order.

Pin this post to Pinterest because you can refer back to it when you want to read something super suspenseful, disturbing, and shocking.