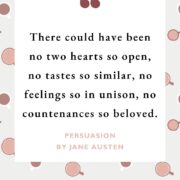 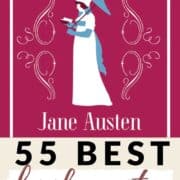 Read the best Jane Austen Persuasion quotes from the book (not the movies) to indulge in some of her most sumptuous and romantic literary prose.

While not as popular as some of her other works, Persuasion still holds its own with the truest of Austen fans, both for its arduous love story and the poeticism of its language, particularly in the infamous love letter in the story.

In fact, I decided to write this post after Netflix released an adaptation panned by many for whittling down and/or removing some of its most beautiful lines to suit a younger, more modern crowd.

So, this list of quotes from Persuasion by Jane Austen for you to savor the original that has stood the test of time.

Persuasion is a “second chance” romance that tells the story of single 27-year-old Anne Elliot, who was persuaded not to marry a man she loved, Captain Frederick Wentworth, eight years earlier, due to his lack of social status.

She’s still reeling from the heartbreak surrounding her poor decision when he returns from war with money and rank, looking for love. But, while Anne remains interested in him, he still hasn’t forgiven her.

It’s a story of the consequences of choosing to adhere to societal expectations versus your own heart. And, if you haven’t read it yet, you’ll need to do so to find out what becomes of Anne’s and Wentworth’s story.

“I can listen no longer in silence. I must speak to you by such means as are within my reach. You pierce my soul. I am half agony, half hope.”

“Now they were as strangers; worse than strangers, for they could never become acquainted.”

“There could have been no two hearts so open, no tastes so similar, no feelings so in unison, no countenances so beloved.”

“If I was wrong in yielding to persuasion once, remember that it was to persuasion exerted on the side of safety, not of risk. When I yielded, I thought it was to duty; but no duty could be called in aid here. In marrying a man indifferent to me, all risk would have been incurred and all duty violated.”

“She had been forced into prudence in her youth, she learned romance as she grew older: the natural sequel of an unnatural beginning.”

“A lady, without a family, was the very best preserver of furniture in the world.”

“Men have had every advantage of us in telling their own story. Education has been theirs in so much higher a degree; the pen has been in their hands. I will not allow books to prove anything.”

“How quick come the reasons for approving what we like.”

“There is hardly any personal defect…which an agreeable manner might not gradually reconcile one to.”

“One does not love a place the less for having suffered in it, unless it has been all suffering, nothing but suffering.”

“Dare not say that man forgets sooner than woman, that his love has an earlier death.”

“We live at home, quiet, confined, and our feelings prey upon us.”

“Anne hoped she had outlived the age of blushing; but the age of emotion she certainly had not.”

“Give him a book, and he will read all day long.”

“All the privilege I claim for my own sex (it is not a very enviable one: you need not covet it), is that of loving longest, when existence or when hope is gone!”

“He had an affectionate heart. He must love somebody.”

“I do think that men can forget a lost love quickly. I know that women would find it much harder.”

“I have loved none but you. Unjust I may have been, weak and resentful I have been, but never inconstant.”

“She prized the frank, the open-hearted, the eager character beyond all others. Warmth and enthusiasm did captivate her still.”

“I hate to hear you talking so like a fine gentleman, and as if women were all fine ladies, instead of rational creatures. We none of us expect to be in smooth water all our days.”

“His profession was all that could ever make her friends wish that tenderness less; the dread of a future war all that could dim her sunshine. She gloried in being a sailor’s wife, but she must pay the tax of quick alarm for belonging to that profession which is, if possible, more distinguished in its domestic virtues than in its national importance.”

“Her word had no weight; her convenience was always to give way.”

“Her pleasure in the walk must arise from the exercise and the day, from the view of the last smiles of the year upon the tawny leaves and withered hedges, and from repeating to herself some few of the thousand poetical descriptions extant of autumn.”

“There, he had seen every thing to exalt in his estimation the woman he had lost, and there begun to deplore the pride, the folly, the madness of resentment, which had kept him from trying to regain her when thrown in his way.”

“I must go, uncertain of my fate; but I shall return hither, or follow your party, as soon as possible. A word, a look, will be enough to decide whether I enter your father’s house this evening or never.”

“I love your indignation.”

“We certainly do not forget you, so soon as you forget us. It is, perhaps, our fate rather than our merit. We cannot help ourselves.”

“His cold politeness, his ceremonious grace, were worse than anything.”

“My idea of good company, Mr. Elliot, is the company of clever, well-informed people, who have a great deal of conversation; that is what I call good company.”

“Her attachment and regrets had, for a long time, clouded every enjoyment of youth, and an early loss of bloom and spirits had been their lasting effect.”

“I would rather be overturned by him, than driven safely by anybody else.”

“I do not think I ever opened a book in my life which had not something to say upon woman’s inconstancy. Songs and proverbs, all talk of woman’s fickleness. But perhaps you will say, these were all written by men.”

“She hoped to be wise and reasonable in time; but alas! Alas! She must confess to herself that she was not wise yet.”

“They had no conversation together, no intercourse but what the commonest civility required. Once so much to each other! Now nothing!”

“I had not waited even these ten days, could I have read your feelings, as I think you must have penetrated mine. I can hardly write. I am every instant hearing something which overpowers me.”

“A man does not recover from such a devotion of the heart to such a woman! He ought not; he does not.”

“She felt that she could so much more depend upon the sincerity of those who sometimes looked or said a careless or a hasty thing, than of those whose presence of mind never varied, whose tongue never slipped.”

“Let us never underestimate the power of a well-written letter.”

“His good looks and his rank had one fair claim on his attachment; since to them he must have owed a wife of very superior character to any thing deserved by his own.“

“What! Would I be turned back from doing a thing that I had determined to do, and that I knew to be right, by the airs and interference of such a person, or of any person, I may say? No, I have no idea of being so easily persuaded. When I have made up my mind, I have made it.”

“I hope I do justice to all that is felt by you, and by those who resemble you. God forbid that I should undervalue the warm and faithful feelings of any of my fellow-creatures! I should deserve utter contempt if I dared to suppose that true attachment and constancy were known only by woman.”

“I offer myself to you again with a heart even more your own than when you almost broke it, eight years and a half ago.”

“For you alone, I think and plan.”

“If I loved a man, as she loves the Admiral, I would always be with him, nothing should ever separate us.“

“I do regard her as one who is too modest for the world in general to be aware of half her accomplishments, and too highly accomplished for modesty to be natural of any other woman.”

“Tell me not that I am too late, that such precious feelings are gone forever.”

“If there is any thing disagreeable going on, men are always sure to get out of it.”

“He had imagined himself indifferent, when he had only been angry; and he had been unjust to her merits, because he had been a sufferer from them.”

“Like other great men under reverses, I must endeavor to subdue my mind to my fortune. I must learn to brook being happier than I deserve.”

“When pain is over, the remembrance of it often becomes a pleasure.”

“Too good, too excellent creature!”

“One man’s ways may be as good as another’s, but we all like our own best.”

Now you know all the best Jane Austen Persuasion quotes.

If you loved these Jane Austen Persuasion quotes, you will love these posts: