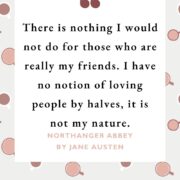 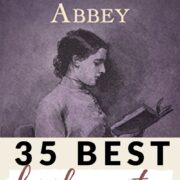 Read the best Northanger Abbey quotes by Jane Austen to indulge in some of her most famous quotes about reading novels, friendship, love, and marriage.

Northanger Abbey is an underrated Jane Austen novel for youthful book lovers at heart. The naive Catherine Morland is a somewhat unlikely heroine, and an avid Gothic romance reader, who comes of age after she befriends fellow book lover Isabella, as well as Henry and Eleanor Tilney, who are siblings of high society.

Thereafter, she visits the grand, yet intimidating, Tilney home and begins to envision their father committing heinous crimes, just like the Gothic books she has read.

And, there are consequences to her very active imagination in this imposing estate with — both negative and positive.

While published after Austen’s death, it was actually written years earlier in her youth, which may account for the differences in these themes and quotes from Northanger Abbey compared to those in Austen’s other works. Northanger Abbey truly does stand in its own unique category. It has a lighter, more youthful feel, and coming-of-age lessons take center stage over epic love affairs.

Also, the 2008 adaptation of Northanger Abbey starring Felicity Jones as Catherine and Carey Mulligan as Isabella, very well captures both the charm and haunted spirit of this unique work of Austen.

Below are all the best Northanger Abbey quotes, which are especially perfect for youthful book lovers!

“No one who had ever seen Catherine Morland in her infancy, would have supposed her born to be an heroine.”

“The person, be it gentleman or lady, who has not pleasure in a good novel, must be intolerably stupid.”

“Oh! it is only a novel! […] only some work in which the greatest powers of the mind are displayed, in which the most thorough knowledge of human nature, the happiest delineation of its varieties, the liveliest effusions of wit and humor are conveyed to the world in the best chosen language.”

“There is nothing I would not do for those who are really my friends. I have no notion of loving people by halves, it is not my nature.”

“His cruelty to such a charming woman made him odious to her. She had often read of such characters.”

“And such is your definition of matrimony and dancing. Taken in that light, certainly their resemblance is not striking; but I think I could place them in such a view. You will allow that in both man has the advantage of choice, woman only the power of refusal; that in both it is an engagement between man and woman, formed for the advantage of each; and that when once entered into, they belong exclusively to each other till the moment of its dissolution; that it is their duty each to endeavor to give the other no cause for wishing that he or she had bestowed themselves elsewhere, and their best interest to keep their own imaginations from wandering towards the perfections of their neighbors, or fancying that they should have been better off with any one else.”

“Beware how you give your heart.”

“If I could not be persuaded into doing what I thought wrong, I will never be tricked into it.”

“It is so delightful to have an evening now and then to oneself.”

“Friendship is certainly the finest balm for the pangs of disappointed love.”

Oh! that arch eye of yours! – It sees through every thing.”

“I cannot speak well enough to be unintelligible.”

“Where the heart is really attached, I know very well how little one can be pleased with the attention of any body else.”

“The mere habit of learning to love is the thing; and a teachableness of disposition in a young lady is a great blessing.”

“Where people are really attached, poverty itself is wealth.”

“Wherever you are you should always be contented, but especially at home, because there you must spend the most of your time.”

“[B]ut there are some situations of the human mind in which good sense has very little power.”

“If a rainy morning deprived them of other enjoyments, they were still resolute in meeting in defiance of wet and dirt, and shut themselves up, to read novels together.”

“We must live and learn.”

“It would be mortifying to the feelings of many ladies, could they be made to understand how little the heart of a man is affected by what is costly or new in their attire.”

“It requires uncommon steadiness of reason to resist the attraction of being called the most charming girl in the world.”

“I assure you. I have no notion of treating men with such respect. That is the way to spoil them.”

“To be disgraced in the eye of the world, to wear the appearance of infamy while her heart is all purity, her actions all innocence, and the misconduct of another the true source of her debasement, is one of those circumstances which peculiarly belong to the heroine’s life, and her fortitude under it what particularly dignifies her character.”

“The past, present, and future, were all equally in gloom.”

“What one means one day, you know, one may not mean the next. Circumstances change, opinions alter.”

“Dear Miss Morland, consider the dreadful nature of the suspicions you have entertained. What have you been judging from?”

“As for admiration, it was always very welcome when it came, but she did not depend on it.”

“Now I must give one smirk and then we may be rational again.”

“If we have not hearts, we have eyes; and they give us torment enough.”

“Everybody allows that the talent of writing agreeable letters is peculiarly female. Nature may have done something, but I am sure it must be essentially assisted by the practice of keeping a journal.”

“I am delighted with the book! I should like to spend my whole life in reading it. I assure you, if it had not been to meet you, I would not have come away from it for all the world.”

“I am fond of history and am very well contented to take the false with the true.”

“Strange things may be generally accounted for if their cause be fairly searched out.”

“The Abbey in itself was no more to her now than any other house. The painful remembrance of the folly it had helped to nourish and perfect, was the only emotion which could spring from a consideration of the building.”

Now you know all the best quotes from Northanger Abbey by Jane Austen.

If you loved these quotes from Northanger Abbey by Jane Austen, you will love these posts: