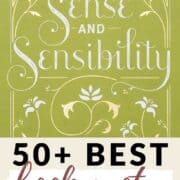 Get all the best Sense and Sensibility quotes from the book by Jane Austen about love, family, social class, gender, reality, and of course... sense and, well, sensibility.

First published in 1811 Sense and Sensibility was Jane Austen's first novel. It's the story of two different sisters, Elinor Dashwood and Marianne Dashwood, who must leave home after the death of their father and attempt to have good marriages. But, naturally, there's so much standing in their way...

(Sense and Sensibility is also on the Gilmore Girls reading list!)

Below are the best Sense and Sensibility quotes by Jane Austen:

"Marianne Dashwood was born to an extraordinary fate. She was born to discover the falsehood of her own opinions, and to counteract, by her conduct, her most favourite maxims."

"Marianne, who had the knack of finding her way in every house to the library, however it might be avoided by the family in general, soon procured herself a book."

"The more I know of the world, the more I am convinced that I shall never see a man whom I can really love. I require so much!"

"If a book is well written, I always find it too short."

"Elinor agreed to it all, for she did not think he deserved the compliment of rational opposition."

"It is not what we think or feel that makes us who we are. It is what we do. Or fail to do."

"People always live forever when there is an annuity to be paid them."

"That Marianne found her own happiness in forming his, was equally the persuasion and delight of each observing friend."

"I have not wanted syllables where actions have spoken so plainly."

"I come here with no expectations, only to profess, now that I am at liberty to do so, that my heart is and always will be...yours."

"A man who has nothing to do with his own time has no conscience in his intrusion on that of others."

"A fond mother ... in pursuit of praise for her children, the most rapacious of human beings, is likewise the most credulous; her demands are exorbitant; but she will swallow anything."

"When the romantic refinements of a young mind are obliged to give way, how frequently are they succeeded by such opinions as are but too common and too dangerous!"

"There was a kind of cold-hearted selfishness on both sides, which mutually attracted them; and they sympathized with each other in an insipid propriety of demeanour, and a general want of understanding."

"Money can only give happiness where there is nothing else to give it."

"Always resignation and acceptance. Always prudence and honour and duty."

"She knew that what Marianne and her mother conjectured one moment, they believed the next—that with them, to wish was to hope, and to hope was to expect."

"At my time of life opinions are tolerably fixed. It is not likely that I should now see or hear anything to change them."

“I am excessively fond of a cottage; there is always so much comfort, so much elegance about them. And I protest, if I had any money to spare, I should buy a little land and build one myself, within a short distance of London, where I might drive myself down at any time, and collect a few friends about me and be happy. I advise everybody who is going to build, to build a cottage.”

"When he was present she had no eyes for anyone else."

"By reading only six hours a-day, I shall gain in the course of a twelve-month a great deal of instruction which I now feel myself to want."

”Brandon is just the kind of man whom every body speaks well of, and nobody cares about; whom all are delighted to see, and nobody remembers to talk to."

"At first sight, his address is certainly not striking; and his person can hardly be called handsome, till the expression of his eyes, which are uncommonly good, and the general sweetness of his countenance, is perceived."

"We have neither of us anything to tell; you, because you do not communicate, and I, because I conceal nothing."

"That is what I like; that is what a young man ought to be. Whatever be his pursuits, his eagerness in them should know no moderation, and leave him no sense of fatigue."

"Sometimes I have kept my feelings to myself, because I could find no language to describe them in but what was worn and hackneyed out of all sense and meaning."

"Sometimes one is guided by what they say of themselves, and very frequently by what other people say of them, without giving oneself time to deliberate and judge."

"Sense will always have attractions for me."

"My loose cash, would certainly be employed in improving my collection of music and books."

"And books! [...] She would buy them all over and over again: she would buy up every copy, I believe, to prevent their falling into unworthy hands."

"She was stronger alone, and her own good sense so well supported her, that her firmness was as unshaken."

“She expected from other people the same opinions and feeling as her own, and she judged their motives by the immediate effect of their actions on herself.”

"I will not torment myself any longer by remaining among friends whose society it is impossible to enjoy."

"I can feel no sentiment of approbation inferior to love."

"For to be unaffected was all that a pretty girl could want to make her mind as captivating as her person."

"I could not be happy with a man whose taste did not in every point coincide with my own. He must enter into all my feelings; the same books, the same music must charm us both.”

"I never wish to offend, but I am so foolishly shy, that I often seem negligent, when I am only kept back by my natural awkwardness."

"Know your own happiness. You want nothing but patience- or give it a more fascinating name, call it hope."

"I think him every thing that is worthy and amiable."

"Life could do nothing for her, beyond giving time for a better preparation for death."

"It is not time or opportunity that is to determine intimacy;—it is disposition alone. Seven years would be insufficient to make some people acquainted with each other, and seven days are more than enough for others."

"The world had made him extravagant and vain - extravagance and vanity had made him cold-hearted and selfish. Vanity, while seeking its own guilty triumph at the expense of another, had involved him in a real attachment, which extravagance, or at least its offspring necessity, had required to be sacrificed. Each faulty propensity in leading him to evil, had led him likewise to punishment."

“What do you know of my heart? What do you know of anything but your own suffering. For weeks, Marianne, I've had this pressing on me without being at liberty to speak of it to a single creature. It was forced on me by the very person whose prior claims ruined all my hope. I have endured her exultations again and again whilst knowing myself to be divided from Edward forever. Believe me, Marianne, had I not been bound to silence I could have provided proof enough of a broken heart, even for you.”

"His own enjoyment, or his own ease, was, in every particular, his ruling principle."

"A man who has nothing to do with his own time has no conscience in his intrusion on that of others."

“If I could but know his heart, everything would become easy.”

“Yes, I found myself, by insensible degrees, sincerely fond of her; and the happiest hours of my life were what I spent with her."

"There is something so amiable in the prejudices of a young mind, that one is sorry to see them give way to the reception of more general opinions."

Now you know all the best Sense and Sensibility quotes.

If you loved these Sense and Sensibility quotes, you will love these posts: