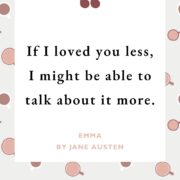 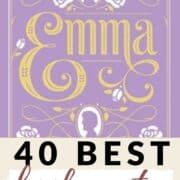 Read the best quotes from Emma by Jane Austen to indulge in some of her most famous quotes about love, marriage, feminism, social status, money, and of course, matchmaking.

Emma is one of readers’ favorite Jane Austen novels, beloved for the witty heroine of the same name who is spoiled and arrogant, yet kind at heart, and loves to steer clear of love herself while acting as a matchmaker to those around her.

But, there are consequences to her meddling in the love life of the young and impressionable Harriet Smith, including sabotaging her own growing love for Mr. Knightley.

If this sounds like the popular 90s cult classic movie, Clueless, to you, that’s because Clueless is a modern adaptation of Emma — and a great one at that. It’s one of my favorite movies of all time, as fresh and clever as the original, yet distinctly very California in the 1990s.

That being said, other adaptations, including the 1996 version of Emma starring Gwyneth Paltrow and the more recent 2020 version of Emma, are also fantastic eye and ear candy in their own right — and more true in dialogue to the original quotes from Jane Austen’s Emma.

Frequently Asked Questions About Quotes in Emma by Jane Austen

What is the first line in Emma?

The first line in Emma by Jane Austen is: “Emma Woodhouse, handsome, clever and rich, with a comfortable home and happy disposition seemed to unite some of the best blessings of existence and had lived nearly twenty-one years in the world with very little to distress or vex her.”

What does Emma say about marriage?

In Jane Austen’s Emma, the protagonist of the same name says the following about marriage: “I have none of the usual inducements of women to marry. Were I to fall in love, indeed, it would be a different thing! But I never have been in love; it is not my way, or my nature; and I do not think I ever shall. And, without love, I am sure I should be a fool to change such a situation as mine.”

What is the last line in Emma?

The last line in Emma by Jane Austen is: “But, in spite of these deficiencies, the wishes, the hopes, the confidence, the predictions of the small band of true friends who witnessed the ceremony, were fully answered in the perfect happiness of the union.”

“The real evils, indeed, of Emma’s situation were the power of having rather too much her own way, and a disposition to think a little too well of herself: these were the disadvantages which threatened alloy to her many enjoyments. The danger, however, was at present so unperceived, that they did not by any means rank as misfortunes with her.”

“I may have lost my heart, but not my self-control.”

“If I loved you less, I might be able to talk about it more.”

“It was foolish, it was wrong, to take so active a part in bringing any two people together.”

“Time, you may be sure, will make one or the other of us think differently; and, in the meanwhile, we need not talk much on the subject.”

“It is very difficult for the prosperous to be humble.”

“Seldom, very seldom, does complete truth belong to any human disclosure; seldom can it happen that something is not a little disguised, or a little mistaken.”

“Evil to some is always good to others.”

“Business, you know, may bring money, but friendship hardly ever does.”

“Wickedness is always wickedness, but folly is not always folly.”

“I always deserve the best treatment, because I never put up with any other.”

“Never could I expect to be so truly beloved and important; so always first and always right in any man’s eyes as I am in my father’s.”

“It may be possible to do without dancing entirely.”

“There are people, who the more you do for them, the less they will do for themselves.”

“Better be without sense than misapply it as you do. ”

“Silly things do cease to be silly if they are done by sensible people in an impudent way.”

“Blessed with so many resources within myself the world was not necessary to me. I could do very well without it.”

“A few minutes were sufficient for making her acquainted with her own heart.”

“It is very unfair to judge of any body’s conduct, without an intimate knowledge of their situation.”

“Fine dancing, I believe, like virtue, must be its own reward.”

“Miss Bates had never boasted either beauty or cleverness. […]. And yet she was a happy woman, and a woman whom no one named without good will.”

“A woman is not to marry a man merely because she is asked, or because he is attached to her, and can write a tolerable letter.”

“At Christmas every body invites their friends and thinks little of even the worst weather.”

“What is passable in youth is detestable in later age.”

“It is always incomprehensible to a man that a woman should ever refuse an offer of marriage. A man always imagines a woman to be ready for any body who asks her.”

“You must be the best judge of your own happiness.”

“I would much rather have been merry than wise.”

“With insufferable vanity had she believed herself in the secret of everybody’s feelings; with unpardonable arrogance proposed to arrange everybody’s destiny. She was proved to have been universally mistaken; and she had not quite done nothing—for she had done mischief.”

“There is no charm equal to tenderness of heart.”

“I certainly will not persuade myself to feel more than I do. I am quite enough in love. I should be sorry to be more.”

“Where the wound had been given, there must the cure be found, if any where.”

“One half of the world cannot understand the pleasures of the other.”

“I lay it down as a general rule, Harriet, that if a woman doubts as to whether she should accept a man or not, she certainly ought to refuse him.”

“And have you never known the pleasure and triumph of a lucky guess? I pity you. I thought you cleverer; for depend upon it, a lucky guess is never merely luck. There is always some talent in it.”

“It is not every man’s fate to marry the woman who loves him best.”

“How often is happiness destroyed by preparation, foolish preparation!”

“Then I examined my own heart. And there you were. Never, I fear, to be removed.”

Now you know all the best quotes from Emma by Jane Austen.

If you loved these quotes from Emma by Jane Austen, you will love these posts: