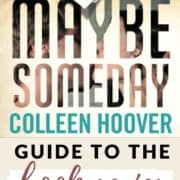 Love to binge CoHo books? This guide to the Colleen Hoover Maybe series of modern romance fiction books tells you everything you need to know before you dive in and/or read your next novel.

Get answers to frequently asked questions about the Colleen Hoover Maybe series order and more, followed by a quick review of the storyline and characters in each of the three books in the series. (There’s even some exclusive music!) Lastly, get a printable PDF of all Colleen Hoover books so you can track your reading.

(If you’re shopping for a present, this book series is a great gift for fans of Colleen Hoover.)

Below are answers to frequently asked questions about the Colleen Hoover Maybe Series:

What order do you read the Maybe Someday series?

In terms of storyline, however, Maybe Not is a companion piece and technically, it can be read after Maybe Someday or after both Maybe Someday and Maybe Now.

Is Maybe Not by Colleen Hoover part of a series?

Yes. Maybe Not is the second of three books in the Maybe Someday Colleen Hoover series.

Which comes first Maybe Someday or Maybe Not?

Maybe Someday comes first in the Maybe Someday series by Colleen Hoover. Maybe Not is the second of three books in the series.

Is Maybe Someday by Colleen Hoover a sequel?

The age rating for the Maybe series is Mature Adults aged 17 and over.

Below are summaries and quotes of the three books in the Colleen Hoover Maybe series:

“Sometimes in life, we need a few bad days in order to keep the good ones in perspective.”

Maybe Someday is the first of three books in the Colleen Hoover Maybe series.

Sydney is a college student with a steady job and a loving boyfriend, Hunter — that is, until she realizes he’s been cheating on her.

She can’t keep her eyes off her mysterious guitar-playing neighbor, Ridge, who has also noticed her.

When they finally meet, they realize they need each other in more ways than one.

Note: the ebook and paperback contain a link to original music for this book! Listen to the official song below:

“The only difference between falling in love and being in love is that your heart already knows how you feel, but your mind is too stubborn to admit it.”

In Maybe Not (a spinoff that comes second in the Maybe Someday series order), Warren agrees to live with a female roommate, the cold and calculating Bridgette. When tensions get heated, Warren comes up with a theory that anyone who can hate with so much passion can love with so much passion, and he decides to put it to the test.

Will Bridgette’s heart warm up? Maybe, or Maybe Not.

“It’s the small things people do for others that define the largest parts of them.”

Maybe Now concludes the Maybe series, returning to the world of Ridge and Sydney, Maggie, and Warren and Bridgette.

Ridge and Sydney are happy and carefree, whereas Warren and Bridgette are volatile. Meanwhile, Maggie grapples with her illness.

When Maggie comes across a list of things she always wanted to do, she decides it’s time to accomplish her dreams.

But, Ridge worries about her, and Sydney becomes suspicious of their friendship. If they want to stay together, she must overcome her jealousy and accept that Maggie is a part of their lives.

That’s everything you need to know about the Maybe series.

Bonus: Get your printable PDF of the list of Colleen Hoover books in order below to track your CoHo reads.