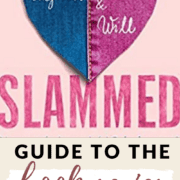 Love to binge CoHo books? This guide to the Colleen Hoover Slammed series of modern Young Adult romance fiction books tells you everything you need to know before you dive in and/or read your next novel.

Get answers to frequently asked questions about the series Slammed by Colleen Hoover, followed by a quick summary of the storyline and characters in each of the three books in the series. Lastly, get a printable PDF of all Colleen Hoover books so you can track your reading.

(If you’re shopping for a present, this book series is a great gift for fans of Colleen Hoover.)

Below are answers to frequently asked the Colleen Hoover Slammed series.

What is Slammed about by Colleen Hoover?

Slammed is a Young Adult romance novel by Colleen Hoover about teen love bonded by a passion for slam poetry and a shocking discovery that challenges them.

Is Slammed a standalone?

No. Slammed by Colleen Hoover is the first of three books in a series. The second book is Point of Retreat and the third book is This Girl.

The age rating for the Slammed series is Young Adults aged 14 and over.

Below are quick summaries of each book in the series:

“I got schooled this year
by
a
boy.

A boy that I’m seriously, deeply, madly, incredibly, and undeniably in love with.
And he taught me the most important thing of all…

To put the emphasis
On life .”

Slammed is the first of three books in the Slammed series by Colleen Hoover, as well as her debut novel.

Eighteen-year-old Layken becomes the rock for her mother and her younger brother after their patriarch unexpectedly dies. Inside, however, she’s driven by angst and losing hope.

Then, she meets her cute and charming new neighbor Will, whose passion for poetry enthralls her. Everything’s great until a truly shocking discovery challenges the relationship.

Only slam poetry may save them.

Here’s an unofficial (fan-made) book trailer to give you a more visual idea of what the book is about:

“If I were a carpenter, I would build you a window to my soul. But I would leave that window shut and locked, so that every time you tried to look through it all you would see is your own reflection. You would see that my soul is a reflection of you.”

Point of Retreat continues Layken’s and Will’s story and ties up loose ends, as a revelation about Will’s past leaves the pair questioning everything. They must decide how hard they are willing to fight for a future together, and it seems only something truly extraordinary will work.

This Girl (Slammed Series Book 3 of 3)

This Girl concludes the Slammed series. It’s an alternative point of view to Slammed, told in flashbacks, but it should still be read third in the series because, otherwise, plot points from Point of Retreat will be revealed.

Layken and Will are married and feeling secure, but Layken seeks to learn more about Will’s past.

For the first time, he’s willing to reveal his innermost feelings and thoughts, both good and bad. This includes shocking confessions from when they first met and so, their future rests on how well they can overcome the past.

That’s everything you need to know about the Colleen Hoover Slammed series.

Bonus: Get your printable PDF of the list of Colleen Hoover books in order below to track your CoHo reads.