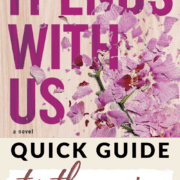 Explore this super quick and helpful guide to the It Ends With Us Sequel / Series by the beloved #1 New York Times and International bestselling author Colleen Hoover.

While ALL of her books are really popular with modern female readers, I can't deny that It Ends With Us seems to be the most popular, and easily the one I hear raved about most on social media.

Originally published in 2016, It Ends With Us now has over 105,000+ reviews (and a 4.7 out of 5-star rating) on Amazon, won Goodread’s Choice Awards for Best Romance Novel, and re-emerged with massive popularity in 2022 on TikTok.

And, it's no surprise. It Ends With Us packs an incredibly emotional punch, leaving the protagonist Lily with the gut-wrenching decision of "whether to stay or go" in the most difficult of situations.

Incidentally, I will also always have a special place in my heart for It Ends With Us. It was the book I was reading on the beach while my husband (then, boyfriend) was, unbeknownst to me, getting ready to propose. I was SO engrossed in the storyline that I completely overlooked so many obvious signs of the momentous event that was about to occur in my life.

(So, Colleen Hoover, if you ever read this, I have YOU to thank for a surprise engagement in addition to an immersive beach read.)

Lucky for fans, the It Ends With Us sequel, It Starts With Us, is set to be released on October 18, 2022, and answer the burning questions that linger.

Is there an It Ends With Us sequel?

Yes. The sequel to the book It Ends With Us by Colleen Hoover is called It Starts With Us and will be released on October 18, 2022. It tells the character Atlas's side of the story and shares what comes next.

Is the book It Ends With Us a Series?

Yes. The second book in the It Ends With Us series by Colleen Hoover is called It Starts With Us and will be released on October 18, 2022. It tells the character Atlas's side of the story.

It Ends With Us Sequel / Series

The premise of It Ends With Us is that the one you love the most can be the one that hurts you the most.

After growing up in small-town Maine, Lily has moved to the big city of Boston and started her own flower shop. She's dealing with the death of the father that abused her mother when she hits it off with a handsome neurosurgeon named Ryle Kincaid.

Ryle is a complex man -- assertive, stubborn, and a bit arrogant, but also sensitive and brilliant. He seems to have a soft spot for Lily, yet he's also averse to relationships.

As their love grows deeper, Lily begins to question her relationship with Ryle, while also thinking about her first love, Atlas Corrigan, a homeless boy who made her feel protected. He was the one who supported her through the times when her father abused her mother.

When Atlas reappears in Lily's life, her relationship with Ryle begins to spiral downward, leaving Lily torn by difficult circumstances and the ultimate question of whether to stay or leave.

It Starts With Us is Atlas Corrigan's side of the story -- both what happened and what comes next. (So, it seems like it will be both a prequel and a sequel, but details are still limited.)

Of note, pre-orders are really important to a new book's overall success, so if you plan on reading It Starts With Us in Fall 2022, consider pre-ordering it now.

That concludes this quick guide to the It Ends With Us sequel / series. I will update it again when more details become available.