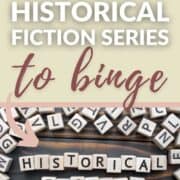 Explore all the best historical fiction series of books to read as you become immersed in the momentous and memorable lives of the famous events and characters in them.

Many of these books get my absolute highest rating and are my own personal favorite books to recommend for your reading bucket list. They are both informative and emotional, as well as impossible to forget. It's a great way to learn about history in a really immersive way.

If you love historical fiction, you will binge these book series faster than a Netflix show. In fact, many of them have movie and tv adaptations you can also binge.

Below are specific details about all the best historical fiction series of books for you to read next.

Firefly Lane is the popular friendship-themed historical fiction book series (and a #1 Netflix adaptation) of two books (the second being Fly Away) that tracks the highs and lows common of deep female friendships over decades of time, beginning in the 1970s.

One becomes famous as she stars on tv, while the other becomes a mom, and they navigate everything from family problems to their careers and love lives, and, as is characteristic of Kristin Hannah novels, hardships and heartaches.

Kate and Tully truly feel like your own friends in this emotional historical fiction read.

Ken Follett is one of the most successful writers of all time, having sold over 181 million copies of his books.

The Century trilogy begins with Fall of Giants and is the epic saga of five interrelated families as they move throughout time, beginning with the momentous dramas of the First World War, the Russian Revolution, and the struggle for women’s suffrage. Completing the trilogy are Winter of the World (#2) and Edge of Eternity (#3).

The Kingsbridge series of four books begins in terms of storyline with The Evening and the Morning (a #1 New York Times bestseller), set in England during the turbulent times of the Middle Ages.

The massively successful book and tv Starz series The Pillars of the Earth (popular pick; a #1 New York Times bestseller) is the second book in this series and is the ambitious twelfth-century tale of building a mighty Gothic cathedral.

Based on a true story about courageous women on separate continents during World War II, Caroline Ferriday is an American socialite who becomes involved in finding justice for the women of Ravensbrück, the notorious Nazi concentration camp for women, where cruel experiments are conducted.

Kelly beautifully and respectfully captures the lives of these women in one of the darkest times in history. What happened in this novel (and in real life) left my jaw on the floor, and this book became one of my favorite books of all time.

The second book in the series, Lost Roses, is set a generation earlier in the 20th century, as Caroline’s mother, Eliza Ferriday, travels to Russia under the shadow of World War I. But when Austria declares war on Serbia and Russia’s imperial dynasty begins to fall, danger is everywhere, as Eliza tries to help families escape.

Lastly, The Sunflower Sisters takes the reader back in time to the American Civil War, following the intertwined paths of the Ferridays' ancestor, a Union nurse during the Civil War, as well as a young enslaved girl who is sold off and conscripted into the army, and a Southern plantation mistress whose husband enlists.

My Brilliant Friend by Elena Ferrante

Now a masterful HBO series, My Brilliant Friend is a historical fiction novel, famously published under a pseudonym, that begins the epic four-book series known as the "Neopolitan Novels." It is my all-time favorite novel and book series.

It all starts in post-WW2 Naples, Italy, where two young girls living in the slums become friends as they read Little Women.

This simple act catapults an entire lifetime of friendship, over which one girl is naturally brilliant but uneducated, and the other is less naturally gifted but highly educated.

Along with an entire neighborhood of characters, their friendship pushes and pulls and twists over time, as themes of gender, education, class, Italian politics, and more are explored.

If you love a good character-driven novel, My Brilliant Friend and the three remaining books: The Story of a New Name (#2), Those Who Leave and Those Who Stay (#3), and The Story of the Lost Child (#4).

Next Year in Havana by Chanel Cleeton

Next Year in Havana begins a really good historical fiction series on Reese's book club list to learn about the history of Cuba via a family of women in dangerous circumstances by an author like Kristin Hannah.

In modern-day Miami, a woman travels back to Cuba and discovers the truth about her grandmother's life in 1958 Cuba. The daughter of a sugar baron, Elisa Perez was sheltered from the country's growing political unrest— that is, until she had an affair with a passionate revolutionary. It's a suspenseful story you won't be able to put down (I couldn't!).

When We Left Cuba is a New York Times bestseller that continues the story of the Perez family in 1960s Florida (and should be read after Next Year in Havana), with espionage that brings the suspense of this series to new levels, with Elisa's sister Beatriz as the protagonist.

The Last Train to Key West is a standalone book taking the reader back in time to 1933 Cuba, as another Perez woman is married off to an American man and a massive hurricane threatens her Florida honeymoon.

The Most Beautiful Girl in Cuba is another standalone book based on a true story, this time taking the reader back to 1896 as another Perez woman acts as a courier, but is secretly working for the Cuban revolutionaries in Havana attempting to free an unjustly imprisoned woman named Evangelina Cisneros.

Lastly, Our Last Days in Barcelona, continues the story of the Perez sisters, as Isabel travels to Spain in 1964 to save her sister Beatriz, who has disappeared, in another heart-pounding tale of espionage.

Outlander is the massively popular history book series and Starz tv series for adults, set in the Scottish Highlands in 1945 and known for its rich historical detail and depth of character and storytelling.

Claire Randall, a former British combat nurse, has come home from the war and has reunited with her husband on a second honeymoon when she walks through a stone and suddenly finds herself to be a Sassenach (an “outlander”) in wartorn Scotland 1743.

The Wideacre trilogy begins with Wideacre, about the messy life of a promiscuous woman named Beatrice Lacy. The remaining two books in the series are The Favoured Child (#2) and Meridon (#3), following the stories of the daughter and granddaughter determined not to follow in her footsteps.

The Tradescant series of two books begins with Earthly Joys, about a humble gardener named John Tradescant, whose enters the life of the rich and powerful with his work. Virgin Earth completes the series, following John's son, who inherits his father's gardening skills, but must flee England on account of a civil war.

The Plantagenet and Tudor novels is the massively popular series about two of the most famous royal bloodlines in European history. In reading order, the fifteen books in this series are:

The Order of Darkness Series begins with Changeling, the 15th-century story of Italian Luca Vero, banished from his religious order after questioning its beliefs. He then becomes involved in a secret sect to uncover dangerous occult practices in this tale of mystery of romance. The three books that follow in this series are Stormbringers (#2), Fools' Gold (#3), and Dark Tracks (#4).

The Fairmile Series begins with Tidelands, about a healer named Alinor, whose husband disappears in the middle of the English civil war in 1648, threatening her safety. The two books that complete this series and the story of Alinor and her daughter over decades of time are Dark Tides (#2) and Dawnlands (#3).

The Practical Magic series is easily one of the best historical novel series, as well as one of my personal favorites, especially for the season of Fall, as it tracks the witching history of the Owens women, dating from the Salem witch trials to the present time, with luscious writing and well-drawn characters.

Practical Magic was published first, and it is a compulsively bingeable character-driven novel about two modern Massachusetts sisters, Gillian and Sally, with elderly aunts encouraging witchery. But, these sisters' fates seem sealed by a curse against their love lives.

Set centuries earlier, Magic Lessons uncovers the beginning of the Owens story and the women's legacies, where abandoned baby Maria Owens is trained in the "Nameless Arts" and, as she learns the lessons of love, she invokes a curse that will haunt her family for generations.

The Rules of Magic was another Reese's book club pick. Set in the 1960s, it's the story of Susanna Owens, her two daughters Franny and Jet (the aunts in Practical Magic), and her son, Vincent. She forbids them from engaging in magic and falling in love, but they learn the truth about who they are during a visit to Massachusetts that changes everything.

Those are all the best historical fiction series of books to read next. Pin this post to Pinterest because you can refer back to it when you are in the mood to indulge.