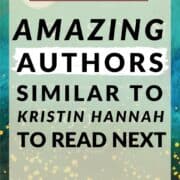 If you love Kristin Hannah’s popular books, you simply can’t miss these bestselling authors similar to Kristin Hannah to read next.

The hallmarks of Kristin Hannah books are:

Read on to determine which author you should read next. For each author listed, I highlight my top book from her backlist, followed by a few other options you may like. I also provide details to help you see exactly how each particular author is like Kristin Hannah.

What should I read if I like Kristin Hannah?

If you liked Kristin Hannah books like The Nightingale, The Great Alone, The Four Winds, and Firefly Lane, read the books of the following authors, who write immersive and emotional modern and historical fiction with strong female leads:

Beatriz Williams is the author of books that I like to categorize as “soap opera historical fiction.” While her books all take place in different time periods and places, one thing they are always filled with is drama.

My top pick is Summer Wives, which is set on an exclusive New England island in 1951 and 1969, and is filled with everything from romance to class struggles and even a murder mystery.

In the catalog of Beatriz Williams, you may also like:

A Hundred Summers, a female friendship story set during a 1938 Summer hurricane in Rhode Island, for fans of Firefly Lane.

Celeste Ng masters storytelling of the modern Asian woman and her unique struggles and relationships.

My top pick is Little Fires Everywhere, a #1 New York Times bestseller and a Reese’s Book Club pick, as well as one of my favorite books of the past many years. Set in the modern nostalgia of 1990s Ohio, it explores the relationships of mothers of different races and classes with their daughters. The tensions build methodically, ultimately becoming (literally) explosive.

In the catalog of Celeste Ng, you may also like:

Everything I Never Told You: The backstory of a Chinese American family in the 1970s coping with the death of a child and revealing their pasts and secrets, so that they may begin to understand each other better.

My top pick: Next Year in Havana

My top pick is Next Year in Havana, which is another Reese’s Book Club pick, as well as one of the best sellers on this blog! For fans of Winter Garden, it’s a suspenseful novel in which a modern-day woman travels to Cuba after her grandmother’s death and, in doing so, she uncovers her family’s secrets, including a love affair during the Cuban revolution in 1958, when the family was forced to flee.

In the catalog of Chanel Cleeton, you may also like:

The Last Train to Key West: an instant New York Times bestseller about three different women’s lives and how they became forever changed by the Florida Keys hurricane of 1935.

My top pick: The Giver of Stars

Jojo Moyes is beloved for her immersive and emotional women’s fiction, both modern and historical.

My top pick is The Giver of Stars, yet another Reese’s book club pick and another #1 New York Times bestseller, chronicling the treacherous journies of three women who travel from home to become known as the Packhorse Librarians of Kentucky in Depression-era America, for fans of The Four Winds.

In the catalog of Jojo Moyes, you may also like:

Me Before You: The #1 New York Times bestseller that shares the tearjerking love story of an unlikely couple, for fans of The Great Alone.

Martha Hall Kelly excels at infusing beauty into the most harrowing of historical circumstances through a view into the incredible strength and resilience of her strong female protagonists.

My top pick is, without a doubt, Lilac Girls, one of my favorite books of all time. It’s a New York Times bestseller with parallel storylines of female leads during World War II: an American socialite and hero, female prisoners at a concentration camp, and a female doctor at the camp. It’s one of the most shocking, yet stunning, books I have read, for fans of The Nightingale.

In the catalog of Martha Hall Kelly, you may also like:

Lost Roses: The satisfying prequel to Lilac Girls, taking place in 1914, as Russia’s imperial dynasty begins to crumble and three women, in different places, attempt to save themselves via an escape and/or help others escape.

My top pick: The Seven Husbands of Evelyn Hugo

My top pick is The Seven Husbands of Evelyn Hugo, a New York Times bestseller, and a finalist for Book of the Month’s Book of the Year, as well as the one book that I *swear* everyone LOVES.

It’s the epic, decades-long, glamorous historical and modern fiction story of the aging Evelyn Hugo, the glamorous Hollywood starlet known most for marrying seven men throughout her lifetime. She recounts her life story years later as if it were the most salacious tabloid, with shocking twists along the way.

In the catalog of Taylor Jenkins Reid, you may also like:

Daisy Jones & the Six, the New York Times bestseller, Book of the Year at Book of the Month, and Reese’s book club pick, reading like a 1970s rock documentary about the riveting backstory of a troubled band similar to Fleetwood Mac.

Those are the best authors similar to Kristin Hannah for you to read next for supercharged, historical, female-driven storylines you won’t be able to put down.

Before you go, pin this post to Pinterest because you can refer back to it when you want to read from more authors similar to Kristin Hannah.