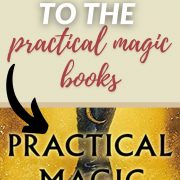 Whether you're a newbie or a super fan, this epic guide to the Practical Magic books tells you everything you need to know about the series of four books by acclaimed author Alice Hoffman (plus one movie adaptation!).

Practical Magic is the story of generations of the magical Owens women of Massachusetts, from a window of time from the Salem witch trials to the present, and the love curse that has plagued their family for generations.

The Practical Magic books are an oxymoron: both beautiful and tragic, as is life, capturing the hearts of readers for nearly twenty years.

Below are answers to frequently asked questions about the Practical Magic books (including their order), followed by reviews of each of the four books, including summaries, quotes, my thoughts, and what type of reader each book is best for.

Which Practical Magic book is first?

In the Practical Magic books series, the book Practical Magic was published first, in 1995. The book Magic Lessons, which takes place in the 1600s, is the first book in the chronological order of the story of the Owens family, but it was not published until much later, in 2020.

Is there a sequel to Practical Magic?

What order should I read the Practical Magic books in?

Author Alice Hoffman has said, "I'm often asked about the order in which you should read the books in the Practical Magic series. It’s your choice! You can read them in the order they were written [...] or you can read them in chronological order [...] It’s up to you!"

Should I read Practical Magic or Rules of Magic first?

Practical Magic was published first, but The Rules of Magic is a prequel to Practical Magic in terms of storyline. Author Alice Hoffman excels at making this series readable in any order.

My personal opinion is that I prefer Practical Magic to be read first because to me it feels like the heart of the entire story.

Reviews of the Practical Magic Books (in Chronological Story Order)

My thoughts: I found Magic Lessons to be both lyrical and stunning. I had never read about the Salem witch trials before, and I don't read much from that time period, so it really intrigued and immersed me. While this series is about love at its core, I found this book to be very much about mothers and daughters too.

This is how you begin in this world. These are the lessons to be learned. Drink chamomile tea to calm the spirit. Feed a cold and starve a fever. Read as many books as you can. Always choose courage. Never watch another woman burn. Know that love is the only answer.

Summary: Set in the 1600s, Magic Lessons begins the story of the Owens women. After Maria Owens was abandoned in a snowy field in England as a baby, she came under the care of Hannah Owens, who teaches her the "Nameless Arts."

After Hannah dies, Maria reunites with her birth mother, who practices dark magic, then lands in Curaçao as an indentured servant. Here, young Maria is seduced by an older American businessman named John Hathorne.

When Maria is abandoned by him after he impregnates her, she follows him to Salem, Massachusetts, where he is a judge in the witch trials. En route, she falls for the kind Jewish sailor.

But, upon reaching Salem, Maria and her daughter, Faith, cope with more betrayals and mistakes (and of course, witchery), including the curse that will haunt her family for generations to come.

The men the Owens women fall in love with are doomed to an untimely death.

As she invokes the rules of magic, Maria learns that love is the only thing that matters.

The Rules of Magic

My thoughts: While I enjoyed this one, it didn't grab me personally as much as Practical Magic (which I read first) did. I think it's because it feels more plot-driven, and I prefer character-driven books.

Know that the only remedy for love is to love more.

Summary: The Rules of Magic picks up hundreds of years later, in 1960s New York City, when the world is about to change. Susanna Owens has three unique children: red-haired and difficult Franny; shy but beautiful and perceptive Jet; and charismatic but mischievous Vincent.

Susanna is strict with her children and does not allow them to walk in the moonlight, wear black, or read books about magic. Most importantly, she instructs them to never fall in love.

But when the Owens children visit their Aunt Isabelle in Massachusetts, they reveal family secrets and begin to understand the truth about their powers as they come of age in ways only the Owens family can, amongst the backdrop of repeated tragedy as well as the Vietnam War.

Are they doomed to never know what true love is or can they break the curse and live happily ever after in love? While Franny and Jet will grow up to become the aunts in Practical Magic, Vincent will leave an unexpected legacy.

Best for: fans of character-driven novels

My thoughts: I read this book before the others in the series, and I was really only interested in it because I thought it would be a good book for Fall. It ended up really blowing me away! It was the ultimate character-driven novel, so exquisitely crafted by an American literary legend.

There are some things, after all, that Sally Owens knows for certain: Always throw spilled salt over your left shoulder. Keep rosemary by your garden gate. Add pepper to your mashed potatoes. Plant roses and lavender, for luck. Fall in love whenever you can.

Summary: Practical Magic was the first book published in the practical magic series, and it dives deep into the characters of two particular Owens women, orphaned sisters Gillian and Sally. Their family has been blamed for everything that has gone wrong in their small Massachusetts for generations, and their quirky aunts encourage witchery.

Naturally, they want to escape. Sally does so by marrying the love of her life and having two children, Kylie and Antonia. Gillian, a magnet for men, runs away with a male suitor and continues to move from city to city and suitor to suitor. After tragedy strikes twice, only their magical bonds can bring them back together again when trouble strikes — in the form of a menacing backyard ghost.

Thereafter, the reader learns exactly what makes each of these women tick, particularly in light of the Owens family curse.

Note: Practical Magic is also a popular movie! However, be cautioned it is different than the book. Below is the trailer:

The Book of Magic

Best for: fans who have read the other books in the Practical Magic series first

My thoughts: This is an epic conclusion to the Practical Magic books, to be read at the conclusion of the books, whether you are reading them in order of publication or chronology of the story. It's very satisfying, but only if you have grown to know and love the characters already.

Summary: The Book of Magic begins in a library when aunt Jet hears the deathwatch beetle and knows she has only seven days to live.

But, Jet is not the only one in danger. A frantic attempt to save a young man’s life causes three generations of Owens women, and one long-lost brother, to attempt to break the Owens family curse as they travel from Paris to London to the English countryside, where their ancestor Maria Owens first practiced their "Unnamed Art."

As with all of the other novels, it's both heartwarming and heartbreaking. The Book of Magic thus concludes this masterful story of family and love... and magic.

That concludes my epic guide to the Practical Magic books. I hope it was helpful to both newbies and superfans alike!