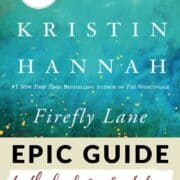 Get everything you need to know about the Firefly Lane book by New York Times bestselling historical fiction author Kristin Hannah, including FAQs, a summary, a review, and more to read about the book. Also learn about the sequel and the Netflix adaptation.

This post aims to cover it all, no matter what you’re looking for about Firefly Lane.

I have been wanting to write about Firefly Lane for a long time, as it’s a coming-of-age women’s friendship novel I frequently think about years later (in part thanks to the emotional Netflix adaptation starring Katherine Heigl and Sarah Chalke), and it’s also often a top ten bestselling book with the readers of this website.

In fact, Kristin Hannah, the beloved historical fiction and women’s fiction author of books like The Nightingale, The Great Alone, and The Four Winds, is *probably* the bestselling author overall on this website.

Below are answers to frequently asked questions about Firefly Lane (both the book and the Netflix series), plus the full historical fiction book series.

Was Firefly Lane based on a book?

Yes, Firefly Lane the Netflix series was originally based on the book of the same name by New York Times bestselling author Kristin Hannah.

When did Firefly Lane book come out?

Is Firefly Lane a good book?

Firefly Lane is a very good book for fans of author Kristin Hannah, fans of the Netflix adaptation of the same name, and fans of historical fiction and/or melodramatic women’s fiction.

Is Firefly Lane book the same as the Netflix series?

Note: There will be a season 2 of Firefly Lane released on Netflix on December 2, 2022.

How many books are in the Firefly Lane series?

Is there a book 2 of Firefly Lane?

Firefly Lane book 2 is Fly Away, the Firefly Lane sequel, which picks up where the storyline left off and primarily explores Tully’s grief and her relationship with her mother, Cloud.

Which book comes first Firefly Lane or Fly Away?

Firefly Lane comes first in the Firefly Lane series, both in terms of publication date and storyline. Fly Away is the sequel.

Note: There is no Firefly Lane book 3.

“That was the thing about best friends. Like sisters and mothers, they could […] make you cry and break your heart, but in the end, when the chips were down, they were there, making you laugh even in your darkest hours.”

Set in Washington state in 1974, Firefly Lane tells the story of eighth grade students Kate Mularkey and Tully Hart — an unlikely due that forms a friendship lasting years thereafter, well into their adulthood.

Kate is an unpopular teen with a loving family, excited when the “coolest girl in the world” Tully moves across the street from her. Tully has beauty, brains and ambition, but she lacks a stable family life. They become inseparable.

Through the eighties and nineties, together they tackle family, love, work in the journalism field, and even fame. While Kate years for motherhood and a simple life, Tully chases her own blind ambition — differences that many friendships experience over time that ultimately lead to jealousy, anger, hurt, resentment, and one massive betrayal.

Sometimes, female friendships are most complex of all, and the coming-of-age story in Firefly Lane has it all, from moments of deep laughter to heartfelt tears.

(Because this is a spoiler-free post, I won’t share the Firefly Lane book ending, but I will say that it’s emotional and memorable, as well as different than that in the Netflix series.)

I really liked Firefly Lane and how it explored the ebb and flow of two women’s friendship over several decades, which also made for lots of fun nostalgia.

Tully and Kate both remain memorable characters to me over the past several years since I first read the book, with quirks and characteristics that make them feel real — the best kinds of book characters!

I also really appreciate books that show the complexity of close relationships, and Firefly Lane surely is filled with all of those highs and lows that are so true to real life.

While I also really enjoyed the Netflix adaptation, it just didn’t quite hit the mark for me the way the book did. (Isn’t that almost always true?!) And, of course, they are fairly different overall — particularly the ending. If you watched it, but didn’t read it, I think it’s definitely worth the read for the sake of comparison alone!

And finally, at the end of the day, if you like Kristin Hannah’s other books and/or you like tearjerking women’s stories (like the movie Beaches), I think you will probably enjoy the book Firefly Lane too.

It also makes a great book for discussion in a women’s book club because you can really dive in and explore the personalities and decisions of the two friends.

Because I love pairing books with lifestyle, and because I think there’s even more to explore about Firefly Lane, here are three more articles I think you will like and find helpful: