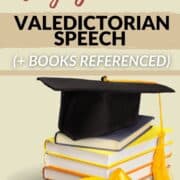 Get the full list of books referenced in the Rory Gilmore valedictorian speech at her Chilton high school graduation with details about each.

Gilmore Girls is a *MAJOR* theme on this blog, as I am the host of @TheRoryGilmoreBookClub on Instagram, where we have a monthly Gilmore Girls reading challenge to read books from the full Gilmore Girls book list on a variety of themes!

So, it only makes sense that we take a closer look at Rory Gilmore’s valedictorian speech, where she infamously refers to herself as living in two worlds, one of which is a world of books.

Rory Gilmore’s valedictorian speech appears in the finale of Season 3, Episode 22: “Those Are Strings, Pinocchio.”

I live in two worlds. One is a world of books. I’ve been a resident of Faulkner’s Yoknapatawpha County, hunted the white whale aboard the Pequod, fought alongside Napoleon, sailed a raft with Huck and Jim, committed absurdities with Ignatius J. Reilly, rode a sad train with Anna Karenina and strolled down Swann’s Way. It’s a rewarding world, but my second one is by far superior.

More About the Books Referenced in Rory Gilmore Valedictorian Speech

Below are snippets of all the literary references Rory makes in her speech, followed by more details about the book or books to which she is referring.

“I’ve been a resident of Faulkner’s Yoknapatawpha County”

Author William Faulkner wrote several books set in the fictional Yoknapatawpha County; however, Rory is seen with The Sound and the Fury in an earlier episode of Gilmore Girls.

“hunted the white whale aboard the Pequod”

The Pequod is the fictional Nantucket whaling ship in Moby Dick by Herman Melville, and the white whale is, of course, Moby Dick.

While there are many books about Napoleon Bonaparte, this reference likely refers to War and Peace by Leo Tolstoy, which are referenced during class at Chilton.

“sailed a raft with Huck and Jim”

Ignatius J. Reilly is the protagonist in A Confederacy of Dunces by John Kennedy Toole.

“Swann’s Way” refers to Swann’s Way: In Search of Lost Time (Vol. I) by Marcel Proust.

Jane Austen is the classic author of six novels, the most popular of which is Pride and Prejudice. Other early Gilmore Girls episodes also reference Northanger Abbey and Sense and Sensibility.

Rory is seen reading The Collected Stories by Eudora Welty in an earlier episode of Gilmore Girls.

That concludes my guide to the books referenced in the Rory Gilmore valedictorian speech at graduation.

If you liked this Gilmore Girls themed post, you will love these posts: