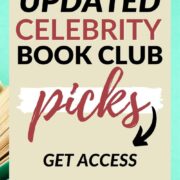 If you’re curious about all the newest celebrity book club picks, this blog post contains an updated list each month to serve as a quick and easy resource for you to find them all in one spot. It’s your book club central!

Below are all the most recent celebrity book club spoilers for the following book clubs:

(Notes: I do not currently follow Sarah Jessica Parker’s book recommendations, Emma Roberts’ Belletrist book club, Emma Watson’s Our Shared Shelf, or Goop book club but I am linking them here for your ease of reference if that’s what you are looking for.)

January 2023 pick: The House in the Pines by Ana Reyes

The House in the Pines is a thrilling mystery in which a woman named Maya works to uncover the truth about the sudden death of her best friend in high school, who literally dropped dead in front of a charming man named Frank with whom they had been spending time.

Years later, Maya’s memories are fuzzy until another woman drops dead in front of Frank, and Maya begins to learn about her Guatemalan father’s past.

The Today Show’s Read with Jenna Bush Hager book club reads books that are offered by Book of the Month. Many of the selections are character-driven and/or diverse.

Sam is a gripping coming-of-age novel about a lower class young girl whose mother encourages her to study hard and be responsible in order to have a better future. But, Sam doesn’t fit in, and all she really wants to do is climb, which frees her.

But, her climbing coach’s attention is more complicated than she thought, and life at home is erratic.

It’s about finding your own sense of self as you become a woman.

The GMA book club reads books that are topical and offer a lot of issues to discuss.

In Age of Vice, a rich man kills five people in his Mercedes in New Dehli, then disappears, leaving a confused servant to attempt to explain what happened.

Changing in time and perspective, this is both a suspenseful crime thriller and a family drama about the wealthy and corrupt Wadia family, fueled by dangerous desires.

Will there be an escape from the madness or will they fall prey to the consequences of their actions?

Oprah Winfrey’s book club dates back to the 1990s and is known for reading both classics and very literary works with an emphasis on Black stories.

(Note: Oprah tends to announce her picks sporadically and not on any particular schedule.)

Set in Appalachia, the protagonist of Demon Copperhead has been compared to literary giants like Huck Finn, David Copperfield, and Holden Caulfield.

It tells the epic story of a boy born to an impoverished, single teen mom, fighting to survive everything from foster care, child labor, poor schooling, addiction, toxic love, and catastrophic losses. It’s also the timely story of the abandonment of rural people for the big cities.

(Note: Netflix usually announces their picks in the middle of each month, so they are often announced much later than other celebrity book club picks.)

May 2022 pick: The Brass Verdict by Michael Connolly

The Brass Verdict is a “Lincoln Lawyer” novel from a #1 New York Times bestselling author. Defense attorney Mickey Haller and Detective Harry Bosch investigate a Hollywood lawyer’s murder and defend a prominent studio executive, placing their own lives at risk.

That concludes all the most recent celebrity book club picks.

Pin this post to Pinterest because you can refer back to it each month for the latest celebrity book club picks.

Good to know! Maybe I will start tracking those too. I love the Literati clubs too.