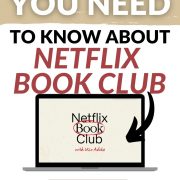 Netflix has officially started a Netflix book club! And I am here to keep you updated on ALL the details.

Since the theme of this website is pairing literature with lifestyle, and I always love to offer book pairings (kind of like Reading Rainbow), book adaptations are a big part of what I do and what I love, so I thought this idea for the Netflix book club was absolutely G-E-N-I-U-S, and I am here for the ride!

The announcement of the Netflix book club came via the below video featuring book club host Uzo Aduba, who you may recall from one of the first successful Netflix book adaptations, Orange is the New Black.

How the Netflix Book Club Works

Does Netflix have a book club?

Each month, the Netflix book club will highlight a book being adapted by Netflix. After the club reads and watches the book together, they talk to the cast and author about the process of how the books went from the page to the screen to become a show over a cup of Starbucks.

In November 2021, the series “But Have You Read the Book?” debuted worldwide on the Still Watching Netflix YouTube channel and in the United States on Netflix’s Facebook channel.

Read, watch, and talk about your favorite book adaptations. You may even be able to answer the age-old question: Was the book or adaptation better?

Since I love to compile and update celebrity book club selections, below is the full list of Netflix book club picks, which I will continue to update over time.

Based on the book by Nella Larsen

Passing is a book about two Black women (Tessa Thompson & Ruth Negga) in 1929 who are passing as white. However, each woman chooses to live on the opposite side of the color line in New York. It’s a journey of self-awareness and identity that is thought-provoking, topical, and beautifully crafted.

The adaptation debuted to critical acclaim at the 2021 Sundance International Film Festival. And this version of the book contains an introduction by Brit Bennett, author of the award-winning book of a similar plot, The Vanishing Half (my favorite book of 2020.

Based on the book by Harlan Coben

Stay Close is a thriller about three people: a suburban soccer mom who once had a wild side; a talented documentary photographer who now poses as a paparazzo; and a detective who can’t let go of a cold case. Each holds shocking secrets.

As the consequences of old events threaten to ruin their lives, they begin to realize they may not want to forget the past after all. Their temptations draw their past lives and the current lives dangerously close together.

Based on the book by Sherryl Woods

Helen has always been a goal-getter, eventually becoming one of the most highly respected divorce attorneys in the state of South Carolina. She’s 42 and single, wishing to start a family.

But, her age and familiarity with divorce are complicating things. Sparks fly with a man who doesn’t want a family, and nothing turns out as planned in this follow-up to the popular light romance series.

The Viscount Who Loved Me (Bridgerton Book 2)

You may already be familiar with the popular Bridgerton book and Netflix series (from Shondaland) about Regency-era romance of the charming and powerful Bridgerton family.

The Viscount Who Loved Me is Anthony’s story, London’s most elusive bachelor. He’s finally chosen a wife, but her older sister, Kate, is a meddler determined to stop the wedding.

Oddly enough, when Anthony sleeps, it’s Kate who features most prominently in his increasingly steamy dreams.

Along for the Ride

Based on the book by Sarah Dessen

Along for the Ride is the popular young adult book in which two insomniacs, Auden and Eli, spend their Summer nights together. Auden comes of age and copes with family problems before she heads off to college, as the mysterious Eli pushes her out of her comfort zone.

Based on the book by Michael Connelly

The Brass Verdict is a “Lincoln Lawyer” novel from a #1 New York Times bestselling author. Defense attorney Mickey Haller and Detective Harry Bosch investigate a Hollywood lawyer’s murder and defend a prominent studio executive, placing their own lives at risk.

Since the Netflix book club is still new, you may want to catch up on some prior book adaptations on Netflix. Below is a list:

I have watched most of these and enjoyed them! I will note a few standouts in case you are still unsure what to read and watch:

That’s everything you need to know about the Netflix book club right now.

I can't find the any new selections from Netflix since June? have you heard what happened.

I have not. It's odd because there are still so many new adaptations on Netflix!

But how do I sigh up!

Any idea what the December book is?

Would like to see a fantasy movie from book, Chronicles of the 13th Tribe, “( books 1 and 2) For Blood and Glory” , by Cassandra Hendricks. It has a black super heroine as main character. Can find the book on Amazon.