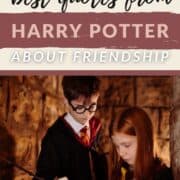 Get all the most inspirational quotes from Harry Potter about friendship, the non-wizarding force of life that helped Harry face Voldemort throughout the Harry Potter series.

These quotes come from the original seven books in the Harry Potter boxed set, as well as the stage play Harry Potter and the Cursed Child, which picks up the storyline twenty years later.

Quotes from Harry Potter About Friendship

What does Harry Potter say about friendship?

Harry Potter is about the loyalty of friends in facing challenges, like Harry's battle against evil as he faced Voldemort, the bravery of standing up to your friends when they need to be challenged, and the dishonor there is in betraying your friends.

Below are the best quotes from Harry Potter about friendship to inspire you:

"Books! And cleverness! There are more important things – friendship and bravery."

“But from that moment on, Hermione Granger became their friend. Because there are some things you can’t go through in life and become friends, and knocking out a twelve-foot mountain troll is one of them.”

"We're with you whatever happens."

"I think you're like James who would have regarded it as the height of dishonor to mistrust his friends."

"More than anything else at Hogwarts, more even than playing Quidditch, Harry missed his best friends, Ron Weasley and Hermione Granger."

“And together they walked back through the gateway to the Muggle world.”

"And you’ll never know love or friendship and I feel sorry for you."

"What a beautiful place to be with friends. Dobby is happy to be with his friends."

"Believe me. I never betrayed James and Lily. I would have died before I betrayed them."

“Ah, Harry, how often this happens, even between the best of friends! Each of us believes that what he has to say is much more important than anything the other might have to contribute!”

"We can fight it only by showing an equally strong bond of friendship and trust. Differences of habit and language are nothing at all if our aims are identical and our hearts are open."

"Then you should have died! Died rather than betray your friends, as we would have done for you."

"But the mere fact that they were still there on either side of him, speaking bracing words of comfort, not shrinking from him as though he were contaminated or dangerous, was worth more than he could ever tell them."

"'No, Harry, you listen,' said Hermione. 'We're coming with you. That was decided months ago — years, really.'”

"You have no business here. This tent is for champions and friends."

"I’m Rubeus Hagrid. And I’m gonna be yer friend whether yeh like it or not."

"That’s the thing, isn’t it? About friendships. You don’t know what he needs. You only know he needs it."

"You -- the three of you -- you shone you know? You liked each other. You had fun. I envied you those friendships more than anything else."

Those are all the best quotes from Harry Potter about friendship.

If you loved this post, you will love these Harry Potter-themed posts: