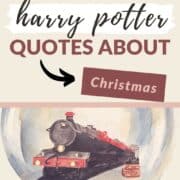 Explore the best Harry Potter Christmas quotes from the book series for a magical holiday season filled with cheer and Butterbeer.

While the Harry Potter books aren’t totally Christmas-themed, they all contain memorable holiday scenes and sayings in the wizarding world.

Below are all the best Harry Potter Christmas quotes categorized by book and placed in the reading order of each Harry Potter book.

Harry Potter and the Sorcerer’s Stone

“One can never have enough socks. Another Christmas has come and gone and I didn’t get a single pair. People will insist on giving me books.”

“Christmas was coming. One morning in mid-December, Hogwarts woke to find itself covered in several feet of snow.”

“On Christmas Eve, Harry went to bed looking forward to the next day for the food and the fun, but not expecting any presents at all. When he woke early in the morning, however, the first thing he saw was a small pile of packages at the foot of his bed.”

“Harry had never in all his life had such a Christmas dinner. A hundred fat, roast turkeys, mountains of roast and boiled potatoes, platters of chipolatas, tureens of buttered peas, silver boats of thick, rich gravy and cranberry sauce — and stacks of wizard crackers every few feet along the table. These fantastic crackers were nothing like the feeble Muggle ones the Dursleys usually bought, with their little plastic toys and their flimsy paper hats. Harry pulled a wizard cracker with Fred and it didn’t just bang, it went off with a blast like a cannon and engulfed them all in a cloud of blue smoke, while from the inside exploded a rear admiral’s hat and several live, white mice. Up on the High Table, Dumbledore had swapped his pointed wizard’s hat for a flowered bonnet, and was chuckling merrily at a joke Professor Flitwick had just read him.”

Harry Potter and the Chamber of Secrets

“Snape looked as though Christmas had been canceled.”

“I think she’s trying to read the whole library before Christmas.”

“Harry and Ron had barely finished their third helpings of Christmas pudding when Hermione ushered them out of the Hall to finalize their plans for the evening.”

“The Great Hall looked magnificent. Not only were there a dozen frost-covered Christmas trees and thick streamers of holly and mistletoe crisscrossing the ceiling, but enchanted snow was falling, warm and dry, from the ceiling.”

Buy Harry Potter and the Chamber of Secrets:

Harry Potter and the Prisoner of Azkaban

“Harry and Hermione made their way to the back of the room, where there was a small, vacant table between the window and a handsome Christmas tree which stood next to the fireplace. Ron came back five minutes later, carrying three foaming tankards of hot Butterbeer. ‘Happy Christmas!’ he said happily, raising his tankard. Harry drank deeply. It was the most delicious thing he’d ever tasted and seemed to heat every bit of him from the inside.”

“Two weeks before the end of term, the sky lightened suddenly to a dazzling, opaline white and the muddy grounds were revealed one morning covered in glittering frost. Inside the castle, there was a buzz of Christmas in the air.”

“Hogsmeade looked like a Christmas card; the little thatched cottages and shops were all covered in a layer of crisp snow; there were holly wreaths on the doors and strings of enchanted candles hanging in the trees.”

Buy Harry Potter and the Prisoner of Azkaban:

Harry Potter and the Goblet of Fire

“Everlasting icicles had been attached to the banisters of the marble staircase; the usual twelve Christmas trees in the Great Hall were bedecked with everything from luminous holly berries to real, hooting, golden owls, and the suits of armor had all been bewitched to sing carols whenever anyone passed them.”

“‘It’s Christmas, Hermione,’ said Harry lazily; he was rereading Flying with the Cannons for the tenth time in an armchair near the fire.”

Buy Harry Potter and the Goblet of Fire:

Harry Potter and the Order of the Phoenix

“’Mistletoe,’ said Luna dreamily, pointing at a large clump of white berries placed almost over Harry’s head. He jumped out from under it. ‘Good thinking,’ said Luna seriously. ‘It’s often infested with nargles.’”

“All those poor elves I haven’t set free yet, having to stay over during Christmas because there aren’t enough hats!”

“[B]y the time they all went to bed on Christmas Eve the house was barely recognizable. The tarnished chandeliers were no longer hung with cobwebs but with garlands of holly and gold and silver streamers; magical snow glittered in heaps over the threadbare carpets; a great Christmas tree, obtained by Mundungus and decorated with live fairies, blocked Sirius’s family tree from view; and even the stuffed elf heads on the hall wall wore Father Christmas hats and beards.”

“Dobby had taken it upon himself to decorate the place for Christmas. He could tell the elf had done it, because nobody else would have strung a hundred golden baubles from the ceiling, each showing a picture of Harry’s face and bearing the legend: ‘HAVE A VERY HARRY CHRISTMAS!’”

Buy Harry Potter and the Order of the Phoenix:

Harry Potter and the Half-Blood Prince

“Snow was swirling against the icy windows once more; Christmas was approaching fast. Hagrid had already single-handedly delivered the usual twelve Christmas trees for the Great Hall; garlands of holly and tinsel had been twisted around the banisters of the stairs; everlasting candles glowed from inside the helmets of suits of armor and great bunches of mistletoe had been hung at intervals along the corridors.”

“’I didn’t think of giving Kreacher anything. Do people usually give their house-elves Christmas presents?’ asked Harry, prodding the parcel cautiously. ‘Hermione would,’ said Ron. ‘But let’s wait and see what it is before you start feeling guilty.’ A moment later, Harry had given a loud yell and leapt out of his camp bed; the package contained a large number of maggots. ‘Nice,’ said Ron, roaring with laughter. ‘Very thoughtful.’”

“Fred, George, Harry, and Ron were the only ones who knew that the angel on top of the tree was actually a garden gnome that had bitten Fred on the ankle as he pulled up carrots for Christmas dinner. Stupefied, painted gold, stuffed into a miniature tutu and with small wings glued to its back, it glowered down at them all, the ugliest angel Harry had ever seen, with a large bald head like a potato and rather hairy feet.”

Harry Potter and the Deathly Hallows

“But Hermione raised her wand, moved it in a circle through the air, and a wreath of Christmas roses blossomed before them. Harry caught it and laid it on his parent’s grave.”

“The singing grew louder as they approached the church. It made Harry’s throat constrict, it reminded him so forcefully of Hogwarts, of Peeves bellowing rude versions of carols from inside suits of armour, of the Great Hall’s twelve Christmas trees, of Dumbledore wearing a bonnet he had won in a cracker, of Ron in a hand-knitted sweater.”

Those are the best Harry Potter Christmas quotes for a magical holiday.

If you loved these Harry Potter Christmas quotes, you will love these posts: