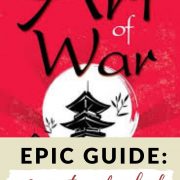 These The Art of War quotes show the brilliance of ancient military strategist Sun Tzu, which has not only informed thousands of years of warfare but also informs on success in life.

The Art of War is a 5th-century BCE military treatise by Chinese strategist Sun-Tzu. Considered to be one of the most influential writings in world history, it has been used by famed military strategists and leaders for thousands of years.

I picked it up at part of my Rory Gilmore reading challenge and because I kept hearing about it over and over. It’s short, but absolutely jam-packed full of information. Every sentence has meaning, and I could actually see this very short text being analyzed line by line over the course of an entire college course.

While there is so much open for debate and discussion about The Art of War, the main ideas I took from The Art of War were to be as prepared as possible for your enemy and to only attack after you are prepared on all fronts and know victory is certain. Preparedness involves everything from knowledge to resources to location to the ability to pivot. And for these reasons, The teachings of The Art of War can be applied to life as well.

Read The Art of War for Free

Since The Art of War is such an old text, it may be read for free online. Below are the resources where I personally listened to and read The Art of War for free:

Read The Art of War book / PDF for free here.

Listen to The Art of War audiobook for free here.

The Art of War Quotes

Below are 70+ The Art of War quotes that showcase the main points of the text:

“The art of war is of vital importance to the State. It is a matter of life and death, a road either to safety or to ruin.”

“The art of war, then, is governed by five constant factors, to be taken into account in one’s deliberations, when seeking to determine the conditions obtaining in the field. These are: (1) The Moral Law; (2) Heaven; (3) Earth; (4) The Commander; (5) Method and discipline.”

“All warfare is based on deception.”

“Hold out baits to entice the enemy. Feign disorder, and crush him.”

“Attack him where he is unprepared, appear where you are not expected.”

“There is no instance of a country having benefited from prolonged warfare.”

“The skillful soldier does not raise a second levy, neither are his supply-wagons loaded more than twice.”

“In war, then, let your great object be victory, not lengthy campaigns.”

“In the practical art of war, the best thing of all is to take the enemy’s country whole and intact; to shatter and destroy it is not so good.”

“There are three ways in which a ruler can bring misfortune upon his army:— (1) By commanding the army to advance or to retreat, being ignorant of the fact that it cannot obey. This is called hobbling the army. (2) By attempting to govern an army in the same way as he administers a kingdom, being ignorant of the conditions which obtain in an army. This causes restlessness in the soldier’s minds. (3) By employing the officers of his army without discrimination, through ignorance of the military principle of adaptation to circumstances. This shakes the confidence of the soldiers.”

“The good fighters of old first put themselves beyond the possibility of defeat, and then waited for an opportunity of defeating the enemy.”

“[T]he skillful fighter puts himself into a position which makes defeat impossible, and does not miss the moment for defeating the enemy.”

“Thus it is that in war the victorious strategist only seeks battle after the victory has been won, whereas he who is destined to defeat first fights and afterwards looks for victory.”

“In all fighting, the direct method may be used for joining battle, but indirect methods will be needed in order to secure victory.”

“In battle, there are not more than two methods of attack—the direct and the indirect; yet these two in combination give rise to an endless series of maneuvers.”

“Thus the energy developed by good fighting men is as the momentum of a round stone rolled down a mountain thousands of feet in height.”

“O divine art of subtlety and secrecy! Through you we learn to be invisible, through you inaudible; and hence we can hold the enemy’s fate in our hands.”

“You may advance and be absolutely irresistible, if you make for the enemy’s weak points; you may retire and be safe from pursuit if your movements are more
rapid than those of the enemy.”

“By discovering the enemy’s dispositions and remaining invisible ourselves, we can keep our forces concentrated, while the enemy’s must be divided.”

“Numerical weakness comes from having to prepare against possible attacks; numerical strength, from compelling our adversary to make these preparations against us.”

“In making tactical dispositions, the highest pitch you can attain is to conceal them; conceal your dispositions, and you will be safe from the prying of the subtlest spies, from the machinations of the wisest brains.”

“Do not repeat the tactics which have gained you one victory, but let your methods be regulated by the infinite variety of circumstances.”

“So in war, the way is to avoid what is strong and to strike at what is weak.”

“[J]ust as water retains no constant shape, so in warfare there are no constant conditions.”

“Maneuvering with an army is advantageous; with an undisciplined multitude, most dangerous.”

“We are not fit to lead an army on the march unless we are familiar with the face of the country—its mountains and forests, its pitfalls and precipices, its marshes and swamps.”

“Let your plans be dark and impenetrable as night, and when you move, fall like a thunderbolt.”

“Ponder and deliberate before you make a move.”

“He will conquer who has learnt the artifice of deviation. Such is the art of maneuvering.”

“In night-fighting, then, make much use of signalfires and drums, and in fighting by day, of flags and banners, as a means of influencing the ears and eyes of your army.”

“It is a military axiom not to advance uphill against the enemy, nor to oppose him when he comes downhill.”

“[I]n the wise leader’s plans, considerations of advantage and of disadvantage will be blended together.”

“The art of war teaches us to rely not on the likelihood of the enemy’s not coming, but on our own readiness to receive him; not on the chance of his not attacking, but rather on the fact that we have made our position unassailable.”

“There are five dangerous faults which may affect a general: (1) Recklessness, which leads to destruction; (2) cowardice, which leads to capture; (3) a hasty temper, which can be provoked by insults; (4) a delicacy of honor which is sensitive to shame;
(5) over-solicitude for his men, which exposes him to worry and trouble.”

“All armies prefer high ground to low and sunny places to dark.”

“Peace proposals unaccompanied by a sworn covenant indicate a plot.”

“He who exercises no forethought but makes light of his opponents is sure to be captured by them.”

“Therefore soldiers must be treated in the first instance with humanity, but kept under control by means of iron discipline. This is a certain road to victory.”

“Now an army is exposed to six several calamities, not arising from natural causes, but from faults for which the general is responsible. These are: (1) Flight; (2) insubordination; (3) collapse; (4) ruin; (5) disorganization; (6) rout.”

“Regard your soldiers as your children, and they will follow you into the deepest valleys; look upon them as your own beloved sons, and they will stand by you
even unto death.”

“If you know the enemy and know yourself, your victory will not stand in doubt; if
you know Heaven and know Earth, you may make your victory complete.”

“Rapidity is the essence of war: take advantage of the enemy’s unreadiness, make your way by unexpected routes, and attack unguarded spots.”

“The following are the principles to be observed by an invading force: The further you penetrate into a country, the greater will be the solidarity of your troops, and thus the defenders will not prevail against you.”

“Throw your soldiers into positions whence there is no escape, and they will prefer death to flight. If they will face death, there is nothing they may not achieve.”

“The principle on which to manage an army is to set up one standard of courage which all must reach.”

“How to make the best of both strong and weak—that is a question involving the proper use of ground.”

“By shifting his camp and taking circuitous routes, he prevents the enemy from anticipating his purpose.”

“When invading hostile territory, the general principle is, that penetrating deeply brings cohesion; penetrating but a short way means dispersion.”

“For it is precisely when a force has fallen into harm’s way that is capable of striking a blow for victory.”

“Success in warfare is gained by carefully accommodating ourselves to the enemy’s purpose.”

“There are five ways of attacking with fire. The first is to burn soldiers in their camp; the second is to burn stores; the third is to burn baggage trains; the fourth is to burn arsenals and magazines; the fifth is to hurl dropping fire amongst the enemy.”

“In attacking with fire, one should be prepared to meet five possible developments: (1) When fire breaks out inside to enemy’s camp, respond at once with an attack from without. (2) If there is an outbreak of fire, but the enemy’s soldiers remain quiet, bide your time and do not attack. (3) When the force of the flames has reached its
height, follow it up with an attack, if that is practicable; if not, stay where you are. (4) If it is possible to make an assault with fire from without, do not wait for it to break out within, but deliver your attack at a favorable moment. (5) When you start a fire, be to windward of it. Do not attack from the leeward.”

“By means of water, an enemy may be intercepted, but not robbed of all his belongings.”

“Move not unless you see an advantage; use not your troops unless there is something to be gained; fight not unless the position is critical.”

“[W]hat enables the wise sovereign and the good general to strike and conquer, and achieve things beyond the reach of ordinary men, is foreknowledge.

“Knowledge of the enemy’s dispositions can only be obtained from other men. Hence the use of spies, of whom there are five classes: (1) Local spies; (2) inward spies; (3) converted spies; (4) doomed spies; (5) surviving spies.”

“When these five kinds of spy are all at work, none can discover the secret system. This is called ‘divine manipulation of the threads.’ It is the sovereign’s most
precious faculty.”

“Be subtle! be subtle! and use your spies for every kind of business.”

I hope these The Art of War quotes were helpful to you.

Pin this post to Pinterest so you can refer back to The Art of War quotes when you need a refresher.