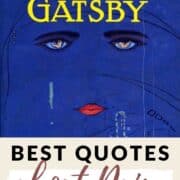 Get the most important and famous The Great Gatsby quotes about Daisy Buchanan and by Daisy from this classic fiction book by F. Scott Fitzgerald about the unrequited love Jay Gatsby has for her, and how empty her privileged life feels, since she has chosen social status over true love.

The Great Gatsby depicts Daisy Buchanan as the physical representation of Jay Gatsby's dreams of wealth and a better lifestyle -- the American Dream. He had a fling with her years prior, but when he left for World War I, she married a high-class man named Tom, with whom she is unhappy. The novel begins as Gatsby has amassed his own wealth in an attempt to win over Daisy's heart again.

Best Quotes from The Great Gatsby About Daisy

Below are all the best The Great Gatsby quotes about Daisy:

"'Her voice is full of money,' he said suddenly.

"[H]e’s read a Chicago paper for years just on the chance of catching a glimpse of Daisy’s name."

"You make me feel uncivilized, Daisy."

"Daisy was young and her artificial world was redolent of orchids and pleasant, cheerful snobbery and orchestras which set the rhythm of the year, summing up the sadness and suggestiveness of life in new tunes."

"Her face was sad and lovely with bright things in it, bright eyes and a bright passionate mouth, but there was an excitement in her voice that men who had cared for her found difficult to forget: a singing compulsion, a whispered 'Listen,' a promise that she had done gay, exciting things just a while since and that there were gay, exciting things hovering in the next hour."

"The exhilarating ripple of her voice was a wild tonic in the rain."

"I waited, and sure enough, in a moment she looked at me with an absolute smirk on her lovely face as if she had asserted her membership in a rather distinguished secret society to which she and Tom belonged."

"He wanted to recover something, some idea of himself perhaps, that had gone into loving Daisy. His life had been confused and disordered since then, but if he could once return to a certain starting place and go over it all slowly, he could find out what that thing was."

"He wanted nothing less of Daisy than that she should go to Tom and say: ‘I never loved you.’ After she had obliterated four years with that sentence they could decide upon the more practical measures to be taken. One of them was that, after she was free, they were to go back to Louisville and be married from her house – just as if it were five years ago."

"They moved with a fast crowd, all of them young and rich and wild, but [Daisy] came out with an absolutely perfect reputation. Perhaps because she doesn’t drink. It’s a great advantage not to drink among hard-drinking people. You can hold your tongue, and, moreover, you can time any little irregularity of your own so that everybody else is so blind that they don’t see or care."

"They were careless people, Tom and Daisy—they smashed up things and creatures and then retreated back into their money or their vast carelessness or whatever it was that kept them together, and let other people clean up the mess they had made."

“There must have been moments even that afternoon when Daisy tumbled short of his dreams—not through her own fault but because of the colossal vitality of his illusion... No amount of fire or freshness can challenge what a man will store up in his ghostly heart.”

"He hadn’t once ceased looking at Daisy and I think he revalued everything in his house according to the measure of response it drew from her well-loved eyes. Sometimes, too, he stared around at his possessions in a dazed way as though in her actual and astounding presence none of it was any longer real. Once he nearly toppled down a flight of stairs."

"He couldn’t possibly leave Daisy until he knew what she was going to do. He was clutching at some last hope and I couldn’t bear to shake him free."

“His heart beat faster and faster as Daisy’s white face came up to his own. He knew that when he kissed this girl, and forever wed his unutterable visions to her perishable breath, his mind would never romp again like the mind of God. So he waited, listening for a moment longer to the tuning fork that had been struck upon a star. Then he kissed her. At his lips’ touch she blossomed like a flower and the incarnation was complete.”

"You make me feel uncivilized, Daisy."

"Possibly it had occurred to him that the colossal significance of that light had now vanished forever. Compared to the great distance that had separated him from Daisy it had seemed very near to her, almost touching her. It had seemed as close as a star to the moon. Now it was again a green light on a dock. His count of enchanted objects had diminished by one."

Best Quotes from The Great Gatsby By Daisy

Below are all the best The Great Gatsby quotes by Daisy:

"She told me it was a girl, and so I turned my head away and wept. 'All right,' I said, 'I'm glad it's a girl. And I hope she'll be a fool—that's the best thing a girl can be in this world, a beautiful little fool."

"What will we plan? What do people plan?"

"All my life. I wish it could always be like this."

"All the bright precious things fade so fast... and they don't come back."

"I looked outdoors for a minute, and it's very romantic outdoors. There's a bird on the lawn that I think must be a nightingale come over on the Cunard or White Star Line. He is singing away… It's romantic, isn't it Tom?"

"Tom's getting very profound. He reads deep books with long words in them."

"It’s a great advantage not to drink among hard-drinking people."

"'What'll we do with ourselves this afternoon,' cried Daisy, 'and the day after that, and the next thirty years?'"

"I did love him once—but I loved you too."

"I wish we could just run away."

"'You see I think everything's terrible anyhow,' she went on in a convinced way. 'Everybody thinks so—the most advanced people. And I know. I've been everywhere and seen everything and done everything.' Her eyes flashed around her in a defiant way, rather like Tom's, and she laughed with thrilling scorn. 'Sophisticated—God, I'm sophisticated!'"

"We can't lose each other. And let all this glorious love end in nothing. Come home. I'll be here waiting and hoping for every long dream of you to come true."

Those are all the best The Great Gatsby quotes about Daisy and by Daisy.

If you liked this The Great Gatsby post, you will love these posts: