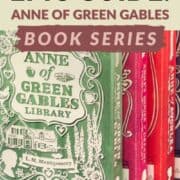 Explore all of the Anne of Green Gables books in order of both storyline and publication date, plus so much more to guide your reading, including answers to frequently asked questions, character descriptions, book summaries, related books, and adaptations of this long-beloved children’s book series.

Over more than a century, Anne of Green Gables has become one of the bestselling books worldwide, having been translated into at least 36 languages and has sold more than 50 million copies.

The series was written by Canadian author Lucy Maud Montgomery, a Canadian novel whose life spanned 1874 to 1942. She published 20 novels, 530 short stories, 500 poems, and 30 essays, with Anne of Green Gables being her most popular work.

This comprehensive guide to Anne of Green Gables shares:

Below are answers to frequently asked questions about Anne of Green Gables:

Who is Anne of Green Gables?

Orphan Anne Shirley is Anne of Green Gables. She’s the 11-year-old, red-headed spitfire who moves into the Prince Edward Island home of Matthew and Marilla Cuthbert, where she causes mischievous trouble and learns valuable life lessons as she grows into adulthood.

Anne of Green Gables is inspired by a true story of two adult siblings who were mistakenly sent an orphan girl instead of a boy but decided to keep her.

Mark Twain called Anne Shirley “the dearest, most moving and delightful child since the immortal Alice.” And The Canadian Encyclopedia named the fictional character of Anne an “icon of Canadian culture.”

How many Anne of Green Gables books are there?

What is the last book in the Anne of Green Gables series?

The last book in the Anne of Green Gables series in order of storyline is Rilla of Ingleside, which was published in 1921.

However, the last book in the Anne of Green Gables series in order of publication date is Anne of Windy Poplars, which was published in 1946.

What is the setting of the novel Anne of Green Gables by Lucy Maud Montgomery?

Book three (Anne of the Island) is primarily set in Kingsport, Nova Scotia.

The final three books (Anne of Ingleside, Rainbow Valley, and Rilla of Ingleside are based in Glen St. Mary, which is near Four Winds.

What age should you read Anne of Green Gables?

Anne of Green Gables is best for children ages 9-12, in grade levels 4-6. However, it is an easy classic book beloved by readers of all ages over an entire century of time.

Below are lists of the Anne of Green Gables books in order of both storyline and publication date (as they differ).

In what order should I read the Anne of Green Gables books?

The eight Anne of Green Gables books in order of storyline are:

What are the Anne of Green Gables Books in order?

The eight Anne of Green Gables books in order of publication date are:

Books Related to the Anne of Green Gables Series

Author Budge Wilson also wrote the official prequel to Anne of Green Gables, Before Green Gables, which was published in 2008 and fully authorized by Montgomery’s heirs.

Below are the most pivotal main characters in Anne of Green Gables, particularly in the early years of Anne’s life, but also into her adulthood:

Below are summaries of all eight Anne of Green Gables books in order of the storyline (not the publication order). Of note, since the storyline chronicles Anne Shirley’s life from child to adult, there are spoilers about what happens throughout her lifetime.

“It’s been my experience that you can nearly always enjoy things if you make up your mind firmly that you will.”

Anne of Green Gables is the first book in the charming series that introduces the reader to the 11-year-old red-headed orphaned spitfire named Anne Shirley. She arrives at the Green Gables house of aging adult siblings Matthew and Marilla Cuthbert mistakenly, as they had asked for a boy to help on their farm in the town of Avonlea in Prince Edward Island, Canada.

However, with a fierce temper and colorful imagination, Anne makes an impression on the Cuthberts and the townspeople of Avonlea.

As one may expect from her impoverished background, Anne is unrefined and lacks social graces, as she attends church for the first time wearing a wreath of wildflowers, uses liniment instead of vanilla in a cake, lets a mouse drown in plum-pudding sauce, mistakenly serves her new friend Diana Barry wine, feuds with the antagonizing school boy Gilbert Blythe, and delivers a preposterous first prayer before bed.

But, Anne’s journey becomes one of growth, as a beloved teacher recognizes her intelligence and helps her focus on her studies, later attending the Queen’s Academy and earning a college scholarship. She also grows emotionally, setting aside her differences with Gilbert.

Unfortunately, when tragedy strikes, Anne chooses to place family and community before herself and, ultimately, she stays in Avonlea as a schoolteacher.

In true character, Anne remains optimistic throughout, imparting the wisdom of her life lessons along the way as she comes of age.

“Well, we all make mistakes, dear, so just put it behind you. We should regret our mistakes and learn from them, but never carry them forward into the future with us.”

In Anne of Avonlea, Anne is now “half-past sixteen” years old. Over the next two years, she becomes the village schoolteacher and prepares to leave for college.

Now, she plays a greater role in the community of Avonlea. Avonlea is filled with characters big and small whose lives intertwine with Anne’s.

Her teen years are filled with characters like Marilla, experiencing life changes of her own, Anne’s childhood best friend, Diana Wright, and her enemy-turned-friend Gilbert Blythe, who now has a crush on her. Also prominent are Mr. J.A. Harrison, one of Anne’s new neighbors, who lives with a parrot named Ginger, Mrs. Rachel Lynde, the town gossip, Miss Lavendar, a kindred spirit, and Anthony Pye, a mischievous young student.

In this book, Anne learns the timeless lessons of a new adult and working woman.

“I don’t want sunbursts or marble halls, I just want you.”

Anne of the Island is the 3rd book in Anne of Green Gables, following Anne as she heads out to Redmond College and lives life on her own terms alongside her old friend, Prissy Grant, and her new friend, Phillipa Gordon.

Momentous events include a marriage proposal from the worst man imaginable, the sale of her first story, and a painful tragedy that teaches Anne a lesson.

Later, Anne and her friends move into an old cottage, as a black cat captures her heart and Gilbert Blythe vies for her love.

“You were never poor as long as you had something to love.”

Anne of Windy Poplars (also known as Anne of Windy Willows) is Anne of Green Gables book 4. It picks up after Anne has left Redmond College to begin a new job.

The renowned Pringles family in Summerside become her greatest challenge as she serves as the principal of Summerside High. Luckily, Anne finds friends in widows Aunt Kate, Aunt Chatty, and their housekeeper Rebecca Dew.

In the process of trying to gain the support of the Pringles, Anne learns all of Summerside’s oddest secrets.

“I couldn’t live where there were no trees–something vital in me would starve.”

Anne’s House of Dreams is the pivotal story in which Anne marries Gilbert Blythe, now a doctor, in the old orchard of Green Gables.

Together, they move to their dream house on the shores of Four Winds. And naturally, they meet new neighbors like the lightkeeper Captain Jim, the honest Ms. Cordelia Bryant, and the tragic, but beautiful, Leslie Moore. Their newlywed years are filled with ups, downs, and the spirit of imagination for which Anne is known.

“It’s not what the world holds for you, it’s what you bring to it.”

Anne of Ingleside is Green Gables book 6. Anne is now the mother of five children, and another of the way. Her life is anything but dull, but there’s still no place she would rather be.

Aunt Mary Maria visits, but soon wears out her welcome, and Anne wonders if Gilbert still loves her. She sets out to make him fall for her all over again.

“It is never quite safe to think we have done with life. When we imagine we have finished our story fate has a trick of turning the page and showing us yet another chapter.”

In Rainbow Valley, Anne’s sixth child has arrived and a strange family moves into an old mansion nearby.

The Meredith family has two boys and two girls, as well as a runaway named Mary Vance. And soon, the Merediths conspire with Anne’s children in their private hideout where they plan to save Mary from the orphanage, to bring happiness to the lonely minister, and to save a pet rooster from ending up in the soup pot.

Just like when Anne herself was a child, this book is full of adventure.

“The body grows slowly and steadily but the soul grows by leaps and bounds. It may come to its full stature in an hour.”

Rilla of Ingleside is the eighth and final book in the Anne of Green Gables book set by Lucy Maud Montgomery.

Now, Anne’s children are mostly grown up, but for young Rilla, who’s both high-spirited and pretty. Rilla looks forward to her first dance and, hopefully, her first kiss, but a far-off war changes everything in a dramatic turn of events, testing her courage and forever changing her.

Below are even more fun books related to Anne of Green Gables for babies, children, and adults:

There are many beloved Anne of Green Gables adaptations available ( including movies, tv series, plays, radio shows, and musicals). I recommend the following ones:

“Anne With an E” aired for three seasons on Netflix and received numerous Canadian awards. However, viewers did have mixed reactions to this particular adaptation.

Now you know all about all of the Anne of Green Gables books in order plus so much more about the beloved series, including answers to frequently asked questions, character descriptions, book summaries, related books, and adaptations of this timeless children’s book series.

If you loved this Anne of Green Gables post, you will love these posts: