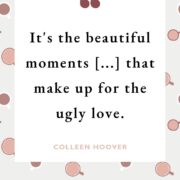 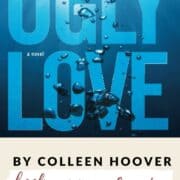 Explore everything you want to know about the book Ugly Love in this guide to Ugly Love: summary, review, characters, and similar books to read next.

Ugly Love is a popular contemporary romance novel by #1 New York Times bestselling author Colleen Hoover. She’s arguably the most popular novelist with young female readers these days, who are left emotionally gripped by the circumstances her characters face in love, and her book specifically title Ugly Love is certainly no exception.

Below are the names and profiles of the most prominent characters in Ugly Love:

Tate Collins: a 23-year-old nursing student and nurse in a hospital

Corbin Collins: Tate’s brother, who works as a pilot

Cap: the 80-year-old elevator attendant at the building where Corbin, Tate, and Miles live

Rachel: The ex of Miles, who broke his heart

Ian Kessler: a friend of Miles

Clayton: the son of Miles and Rachel

The age rating for Ugly Love is Mature Adults aged 17 and over.

Below is an Ugly Love summary of the main points of the plot WITH SPOILERS:

Tate Collins is a 23-year-old nurse, studying to become a registered nurse and working at a hospital. She moves from San Diego to San Francisco to save money by rooming in a high-rise apartment building with her overprotective brother, Corbin, a successful pilot.

Upon her arrival, she first meets Cap, the charming 80-year-old elevator attendant who immediately befriends her.

Then, at her brother’s apartment, she meets airline pilot Miles Archer, who is drunk and moaning, “Rachel.” It’s not exactly love at first sight, as Miles acts rudely towards Tate, but they try to start fresh with each other thereafter.

Tate is focused on her work and her studies, while Miles is very guarded about his personal life and his past.

But, after spending Thanksgiving together with the Collins family, where Tate nurses an injured Miles back to health, he kisses her. It’s now clear that Tate and Miles have an undeniable mutual attraction. The problem? She doesn’t have time for love, and he doesn’t want love.

They end up agreeing to a “friends with benefits” or “no strings attached” arrangement that’s intended to be purely physical. Miles sets the ground rules that Tate not ask about his past nor seek a future with him, but Tate struggles to set her own rules for the arrangement.

That’s where he met and fell in love with the new girl, Rachel, only to learn that she was actually the daughter of his father’s new girlfriend, who Miles believes to be his father’s mistress while his mother was dying.

When Rachel gets pregnant, they tell their parents, only to learn their parents have secretly gotten married and they are now step-siblings. Their parents are unhappy with them, but as Rachel’s due date approaches, they have graduated high school, are living in college housing for families, and are mending their family strife.

Meanwhile, in the present, Tate is falling hard for Miles and wants to be the one to “change him,” as he continues to follow the rules he set, keeping Tate at an arm’s length distance at all times other than those that are physical.

Tate continues to believe there’s something deeper that’s nagging at Miles and that he’s a good person beneath it all. She seeks Cap’s advice as she navigates her growing feelings. Additionally, Corbin finds out about their relationship and, despite being overprotective and mad at first, he accepts it.

When Miles shows jealousy that Tate is studying with a fellow male student, she thinks it may be a sign he’s taking down his walls. But, when she confesses her feelings, he reminds her of his rules.

Eventually, Tate moves into her own apartment, and she and Miles stop communicating.

Corbin and Ian then encourage Miles to deal with his past by visiting Rachel.

Back in the past, love gets ugly. Rachel has given birth to a son, Clayton, and, on the way home from the hospital, the car crashed into a lake. Miles saved Rachel, but he could not save their baby, who died. Stricken with grief, Rachel left Miles. This sequence of events was what left Miles a broken man in the present.

Miles visits Rachel in the present day. She is now married and has a daughter, and she explains that she found happiness again.

Below is the conclusion to this Ugly Love summary, with the ending of the book:

Does Ugly Love have a happy ending?

Yes. After Miles visits his ex Rachel, who helps him process the past, he shows up at Tate’s new apartment. Finally, he tells her the whole truth about his past. He takes Tate and Cap up in an airplane, where he proposes to Tate. They get married, and they have a daughter, who they name after Cap. Both Tate and Miles are happy in love with a family.

What is the moral of Ugly Love?

The moral of Ugly Love is that you can find happiness again after tragedy and loss, and that humans need to both cope with the bad moments in life and enjoy the good.

Below is my personal review of Ugly Love — the good, the bad, and the… ugly (wink):

Ugly Love is one of the best Colleen Hoover books overall, beloved by readers worldwide for the gutwrenching events Miles experienced and must cope with in order to find love and happiness again with Tate, who has fallen for him despite his lack of emotion towards her, and his desire to have a purely physical relationship.

There were things I liked and disliked about it. First, I liked the fact that Miles and Tate experienced “real” life together. They weren’t just two good-looking people who couldn’t keep their hands off of each other. As the title states, real life and real love isn’t pretty — it’s ugly.

As with most other Colleen Hoover books, it was also fast-paced, steamy, and very emotional.

On the negative side, I felt that the character of Miles was explored in substantial detail, whereas Tate’s was not. Because of this, it made it hard for me to truly see her as “the one” for Miles. It seemed to me he was always more in love with Rachel.

It also seemed unlikely that Miles could have “gotten there” with Tate without A LOT of therapy and work on himself beyond what the book showed.

While I liked that Miles had a lot of personal history and that, in reading the book page by page, I just knew something really, really bad had to have made him so closed off in the present, I also felt his back story was a bit over dramatized, particularly at such a young age.

It’s not impossible for it all to have been his truth, but it was definitely unlikely. I have a hard time generally with storylines that seem to include every traumatic event imaginable in a character’s life.

I also disliked that Tate was “that girl” who believed she could change a man by loving him hard enough. It happens too often in real life, and it almost never turns out well. So, I didn’t really like the message that loving a person who’s not in a place for mature love will eventually make them a great partner.

Lastly, to end on a positive note, I did think Ugly Love had an amazing supporting cast, from Cap to Corbin, and Ian. They were all interesting additions to the story of Miles and Tate, and they made the book that much more memorable.

If you want to read more books like Ugly Love, I recommend that you read romance books that involve “no strings attached” relationships, “friends with benefits” relationships and/or characters coping with very traumatic pasts in their current love lives.

Here are a few books similar to Ugly Love that you should check out, based on my own personal recommendation plus their popularity with other readers:

If you loved this Colleen Hoover post, you will love these posts: