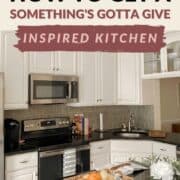 Calling all Nancy Meyers fans and coastal grandmothers: learn exactly how to get a Something’s Gotta Give kitchen right here, based on how I recreated this iconic movie kitchen in my own home.

Nancy Meyers is the American filmmaker known for making romantic comedies, often about middle-aged women, with the most perfectly curated homes for her main characters.

And Something’s Gotta Give is her 2003 rom com starring Diane Keaton as a middle-aged divorcee writer living the coastal grandmother life in the Hamptons, where she ends up nursing her daughter’s older boyfriend, played by Jack Nicholson.

Over the years (now, two decades), the Hamptons beach house of Keaton’s character has taken on a life of its own, inspiring the coastal grandmother trend. In Elle Decor, Nancy Meyers described it as “every woman’s dream house,” and Hollywood Reporter called its kitchen “the most-copied kitchen of all time.”

The kitchen was also featured in Architectural Digest and Washington Post wrote an article about the kitchen’s popularity, entitled, “They’ve Gotta Have It.”

But, Meyers believes its more than just the design that makes this particular kitchen so coveted for so long:

The kitchen is what everybody talks about. It’s about the bountiful kitchen, the hearth, the mother. When I think of somebody’s house, I think of the kitchen.

To me, the Something’s Gotta Give kitchen screams: I love to cook with fresh ingredients and host dinner parties over a nice bottle of wine with oldies and jazz softly playing in the background.

Below are images of the Something’s Gotta Give kitchen featured in the movie:

The interior design of the Something’s Gotta Give kitchen features the following elements:

It also features the following home decor, which gives it that cozy, coastal, lived-in feel:

When we first saw the listing for our home in June 2021, we had just started looking (literally that night), but for many reasons, I just KNEW this was our new home (as did my husband).

One thing that really threw me off about it, however, was the kitchen. It looked so stark and cold in sharply contrasting black and white on the listing:

As a few days passed and we neared the day we would look at the house in person, though, I realized that it reminded me of the Something’s Gotta Give kitchen, and I knew I could warm it up to get that comforting feel with some fresh, feminine touches.

I’m a big Nancy Meyers fan, and I love to listen to the Nancy Meyers’ Kitchen playlist on Spotify while I’m cooking, so the thought of recreating this aesthetic REALLY excited me.

In other words, I was a coastal grandmother before this trend had a name! And, in fact, when the trend first became popular, a friend forwarded it to me and said, “This seems very YOU.”

After we moved in, we ended up doing A LOT more work than anticipated on the kitchen, but we feel we now truly have a custom Something’s Gotta Give kitchen without completely overhauling our kitchen at the same time.

Below is our AFTER video and photos:

The more major kitchen renovation work we did includes:

And below is the furniture and decor we added to complete our Something’s Gotta Give kitchen:

If you want to make your own kitchen look more like a Something’s Gotta Give kitchen, you too can incorporate some or all of these design and decor elements with the items below:

Shop the products I used in my Something’s Gotta Give kitchen below:

Shop even more products inspired by the Something’s Gotta Give kitchen below:

Now, you know how to get “the most-copied kitchen of all time” by Nancy Meyers in the movie Something’s Gotta Give.

If you loved this post, you will love these posts: