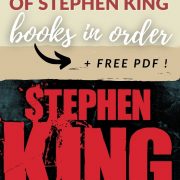 If you’re a Stephen King superfan looking to track your reading, this post contains an updated list of Stephen King books in order of the list to make it easy for you.

Who is Stephen King?

Stephen King is a bestselling modern American author with more than 350 million books sold. His catalog is vast, but he is best known for his horror stories. He is the recipient of numerous writing awards, including the 2003 The National Book Foundation Medal for Distinguished Contribution to American Letters and the 2014 National Medal of Arts.  He currently resides in Maine and Florida with his wife, novelist Tabitha King.

What kind of books does Stephen King write?

How many novels has Stephen King written?

Stephen King has written 65 novels, including his newest book, Fairy Tale, a novel that was released on September 6, 2022.

What is the longest Stephen King book?

With 1,152 pages, The Complete and Uncut Edition of The Stand is Stephen King’s longest stand-alone book.

What is the bestselling Stephen King book?

The data is not exact, but the general consensus is that the bestselling Stephen King book is The Stand.

What is Stephen King’s newest book?

Stephen King’s newest book is Fairy Tale, a novel that was released on September 6, 2022.

This full list of Stephen King books in order comes with some caveats to note.

The works of Stephen King are incredibly vast and number in the hundreds. He has written over 200 short stories alone! Accordingly, this list was incredibly difficult to narrow down.

Since the title of this post is an “Updated List of Stephen King BOOKS in Order,” I chose to focus on just that — BOOKS. I decided that most people searching for this term will be looking for actual books they can easily buy or borrow, and not necessarily a rare, limited edition short story or essay that needs to be tracked down. I also decided to leave out graphic novels.

So, here, you will find a chronological list of Stephen King novels, novellas, story collections, nonfiction books, and boxed sets. Because these works contained various editions, I had to also make decisions on how to list these titles and when, and whether to consider a similar publishing to be a different title. I assure you, it was not easy, but I really did my best to write this article the way I felt a reader would want to read it.

I hope it’s helpful at the end of the day!

To be clear, then, this list does NOT include essays, speeches, poems, standalone short stories, parts of anthologies, screenplays, limited edition only publishings, interviews, uncollected works, or unpublished works. For these works, visit Stephen King’s official website.

Without further ado, here is the updated list of Stephen King books in order of publishing date, from oldest to newest:

Nightmares in the Sky (Nonfiction; December 1987)

On Writing: A Memoir of the Craft (Nonfiction; December 1999)

Secret Windows: Essays and Fiction on the Craft of Writing (Nonfiction;
December 1999)

The Dark Tower: The Wind Through the Keyhole (Limited Edition; February 2012
/ Novel; April 2012)

The Most Popular Stephen King Books

If the full list of Stephen King books in order overwhelms you, I also wanted to share his most popular books, in order to help you decide where to start or what to read next.

Of note, these are the books that are generally considered to be the most popular and bestselling.  But, reasonable minds (especially superfan minds!) may always differ.

As mentioned, while the data is not exact,  the general consensus is that the bestselling Stephen King book is The Stand.

In The Stand, the world ends with an abrupt computer error in a Defense Department laboratory and a million contacts forming a chain letter of death.

The day after is a bleak new world, devoid of both its institutions and 99 percent of its people.  The 1 percent are panicked and choose sides.  “Good” rides on the shoulders of 108-year-old Mother Abigail, while evil is embodied in a lethal, powerful, dark man, Randall Flagg.

It’s an epic tale of moral complexity and survival, both popular amongst readers and considered to be one of King’s finest works.

In The Shining, Jack Torrance has a new job as the off-season caretaker at the atmospheric Overlook Hotel, and he is looking forward to a fresh start.  He plans to reconnect with his family and work on his writing. But as the harsh winter weather arrives, the Hotel feels remote and even sinister.  Strangely, the only one who notices is Danny Torrance, a uniquely gifted five-year-old child.

In Carrie, an unpopular high school student has a difficult time being subjected to her mother’s religious fanaticism. But she’s hiding a big secret: she can move things with her mind.  This can be both powerful and problematic.  After she is the recipient of an act of kindness, she feels normal. But then a cruel prank turns her gift into a weapon of horrific destruction in the town.

In IT, Derry, Maine, is a small city… a haunted small city.  Seven teenagers first stumbled on a horror.  But now, they are adults, and the promise they made as teens reunites them in the place where they once battled an evil creature that preyed on the city’s children. Their repressed memories rise to the surface when children are now being murdered.  And they must prepare once again to battle the monster.

In Pet Sematary, Dr. Louis Creed takes a job in rural Maine and moves his family there. But, an undercurrent of danger exists.  For one thing, the trucks drive too quickly, which is evidenced by the graveyard in the nearby woods where generations have buried their beloved pets. Then there are the warnings of another burial ground beyond the borders.  The truth hidden there is more terrifying and powerful than death itself.

In Misery, bestselling novelist Paul feels free of his popular romance protagonist Misery Chastain, who he has “killed off” in order to expand his creative horizons. But there are consequences.  When a car accident leaves him literally broken, he is nursed back to health by a woman who proclaims herself to be his biggest fan and wants Misery to return in his newest novel.  In an isolated location, she’s willing to do whatever it takes to get her way.

In Salem’s Lot, writer Ben has returned to his hometown, Jerusalem’s Lot, hoping to explore the history of the Marsten House, an old mansion that has been the subject of rumors. But when two boys head into the woods, and only one comes out alive, he realizes that dark forces exist there, and he must contain the evil.

Isnt under the dome a book also besides a movie ?

Thank you very much for sharing this comprehensive list. I hope to become a King completist some day!

Thank you for making the list but you should have added 11/22/63 for winning academy award for best book ever.

Thank you so much for making this, it has been SO much easier to find the books this way, no other sites I went to had all of them.

Thank you! I chose to focus on "books" and not include other works like screenplays, essays, short stories, etc., because it became so massively complicated and hard to track down the really rare stuff. But, I appreciate you mentioning, in case anyone else is interested in this one too!