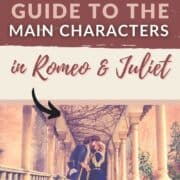 Get a full guide to the Romeo and Juliet main characters in order to quickly and easily understand the names and relevance of each of these Shakespearean characters in the famed play about "star-crossed lovers."

As is clear from the Prologue of Romeo and Juliet, this Shakespearean play is indeed a tragedy about the ill fate of two teenage lovers who die by double suicide as a result of a long-time feud between their families in Verona, Italy.

So, in reading Romeo and Juliet, it's important to know who the characters are and "what side they are on" in order to understand the story. Below is a quick, yet full, guide to the Romeo & Juliet main characters, with brief descriptions of the main plot points of each one.

Who are the main characters in the story of Romeo and Juliet?

Both live in Verona, Italy, and fall in love at a party, despite the fact that their families have a deeply rooted conflict with each other. They secretly marry, but the feud causes them to commit a double suicide, ending the families' long-standing conflict.

Below are even more Romeo and Juliet main characters and their relevance to the story. While THERE ARE SPOILERS BELOW, I tried to limit the descriptions to the main plot points of the characters, leaving the reader to fill in the descriptions as you study the classic play yourself.

Friar Laurence was a Franciscan friar and trusted advisor to Romeo and Juliet, who secretly married the couple in an attempt to bridge peace between their conflicting families.

The Nurse is an intense, and sometimes inappropriate, woman who cared for Juliet since she was a baby, and she remained a loyal companion into Juliet's teenage years, acting as an intermediary between Romeo and Juliet and even helping to arrange their secret marriage.

Mercutio was Romeo's hot-headed, quick-witted, non-romantic friend, as well as a relative of the Prince of Verona. He attended the party where Romeo met Juliet, but he later endured a tragic ending as a result of the violent conflict between the Montagues and the Capulets.

Tybalt was Juliet’s proud cousin and the Nurse's best friend. He tried to cause a fight at the party where Romeo met Juliet, but he was restrained by Lord Capulet. When Romeo later refused to fight Tybalt, Mercutio stepped in and suffered a fatal wound. Romeo later killed Tybalt in an act of vengeance.

Lord Capulet was Juliet's demanding father, who loves her but commanded respect and imposed his belief that she marries a “good” match like Count Paris, a kinsman of the Prince of Verona.

Lady Capulet was Juliet's mother, a woman who married young and sought to see her daughter do the same, despite not offering motherly support to Juliet throughout her life.

Montague was Romeo’s father, the sworn enemy of the Capulets, who was also worried about Romeo's sadness.

Lady Montague was Romeo’s mother, who disliked the violent feud with the Capulets. She was also concerned for Romeo's well-being, and she died of grief after Romeo was exiled from Verona for killing Tybalt.

Count Paris was a kinsman of the Prince, as well as the Capulets' preferred suitor for Juliet, who behaved as though Juliet were already his wife. However, he was later killed by Romeo.

The Page to Paris accompanied Paris to the Capulets' crypt to mourn Juliet's death.

Benvolio was Romeo’s cousin, who attempted to diffuse violence between the Montagues and Capulets. He also attempted to help Romeo get over his infatuation with a woman named Rosaline.

Rosaline was the woman with whom Romeo was infatuated before he met Juliet. She was only referred to by name and did not appear in the play otherwise.

Prince Escalus was the Prince of Verona and a kinsman of Mercutio and Paris. He hated the feud between the Montagues and the Capulets, and his primary goal was to maintain peace.

Petruchio was a friend of Tybalt who searched for Romeo.

Friar John was a Franciscan friar sent by Friar Laurence to tell Romeo of his sleeping potion plan for Juliet, but he did not reach Romeo with the letter.

Sampson and Gregory were servants in the Capulet house who also hated the Montagues and provoked fights.

Abram was Montague’s servant who fought with the Capulets' servants, Sampson and Gregory.

Peter was an uneducated servant for the Capulets, who helped the Nurse meet with Romeo.

Potpan was a funny servant for the Capulets.

Anthony was a servant for the Capulets, tasked with inviting people to Juliet's wedding.

The Apothecary sold poison to Romeo because he wanted the money.

The Chorus was a single character who functioned as the narrator, and he was the first character to appear on stage in the Prologue of Romeo and Juliet.

Now you know all the main characters in Romeo and Juliet.

Romeo and Juliet is also on the Rory Gilmore book list and can be read as part of my Gilmore Girls reading challenge!

And if you loved this Romeo and Juliet themed post, you will love these posts: