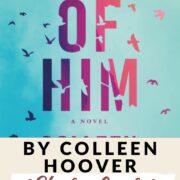 Get a Reminders of Him summary, book review, character list, and memorable quotes in this study guide for the popular, emotional, contemporary romance book by the #1 New York Times bestselling author Colleen Hoover.

It’s hard to deny the massive popularity of Colleen Hoover novels, which hook readers in with gripping love stories that are somehow always different, yet guaranteed to tug on your heart. And, indeed, Reminders of Him is one of Colleen Hoover’s best books overall, delivering that emotional punch along with an intense romance.

Below is a full guide to Reminders of Him so you can decide whether to read it and/or learn more about it if you already read it.

Reminders of Him: Characters

Who are the characters in Reminders of Him?

Reminders of Him: Summary

Kenna Rowan is a 26-year-old woman who has been released from prison 5 years into a 7-year sentence for involuntary manslaughter involving the death of her former boyfriend, Scotty Landry, in a tragic car accident that occurred while they were intoxicated. Kenna had left the scene of the accident and, to this day, is considered to be a villain in her small town.

However, Kenna is determined to reunite with her 4-year-old daughter, Diem, whom she lost custody of to Scotty’s parents, Grace and Patrick. She had been pregnant with Diem at the time of the accident and only met her once.

Back in town, Kenna has coffee alone at Ward’s Bar, where she intrigues the owner, Ledger Ward. He was Scotty’s best friend, and he remains very involved in Diem’s life, but he and Kenna never formally met, and he doesn’t recognize her.

As they continue to get to know each other, he figures out who Kenna really is, which leaves him conflicted, and she begins to rehabilitate herself with a low-paying grocery store cashier job.

When Kenna tries to apologize to the Landrys, Ledger forbids her and explains that they remain in pain and are trying to heal without her presence. The Landrys do, in fact, get a restraining order against her.

But, this doesn’t stop Ledger from getting to know Kenna and, while he’s still conflicted, he begins to understand there may be more lurking beneath the surface about Kenna that the town doesn’t see. He also reveals that he had been engaged, but his ex didn’t like his involvement in Diem’s life. It’s hard to deny that Ledger and Kenna are now intimately connected in more ways than one, and their relationship deepens.

Unfortunately, the Landrys find out about Ledger and Kenna and ask him to choose between them and her.

Reminders of Him Ending

Meanwhile, Kenna reveals that she wrote hundreds of letters to Scotty over her years in prison, and she reads one that explains the accident in detail. Kenna had thought Scotty was dead, and she left for help when she couldn’t find a phone. On the highway, she became disoriented by her injuries and went home. It wasn’t until the next day that she found out he had been alive for 6 hours after the accident and before he died. Riddled with guilt, she plead guilty, and she was too heartbroken to discuss her side of the story in public at her sentencing.

Ledger shows Scotty’s mom the letter, and she forgives Kenna, inviting her to their home to meet Diem, with whom she joyfully reconnects.

Two years later, Ledger and Kenna live together nearby, and they remain very involved in Diem’s life. Together, they also bore a son named Scotty.

Reminders of Him: Book Review

It’s especially a good pick for fans of Ugly Love, but also It Ends With Us.

Redemption and forgiveness are also especially complex themes that dive deeper than most and make these characters’ stories all the more compelling and memorable. And, despite the heaviness of this story, it offers a sense of hope, along with the true meaning of unconditional love both in romance and in families.

I tend to think this particular novel will remain one of the more beloved ones in Hoover’s catalog of bestsellers since it really has a bit of everything her fans love most.

To be fair, however, Reminders of Him was not a perfect book. While Hoover explained the potential holes this story could have had, I still didn’t believe Kenna’s guilty plea and sentencing were likely to occur as they did. (I’m a former lawyer and, thus, especially critical here.) It’s also worth noting that, while Kenna’s character is rehabilitated, she still made big mistakes and is not the most likable protagonist (if that matters to you).

Is Reminders of Him worth reading?

Yes. Reminders of Him by Colleen Hoover is both engaging and fast-paced. The romance is both steamy and realistic, yet the characters also have depth and show arcs throughout the story. Gripping themes like grief, forgiveness, and redemption add to the especially emotional nature of this love story and make it a memorable one for readers to enjoy.

Reminders of Him: Quotes

Below are the best Reminders of Him quotes by Colleen Hoover:

“People say you fall in love, but fall is such a sad word when you think about it. Falls are never good. You fall on the ground, you fall behind, you fall to your death. Whoever was the first person to say they fell in love must have already fallen out of it. Otherwise, they’d have called it something much better.”

“Maybe the best way to cope with the loss of the people we love is to find them in as many places and things as we possibly can. And in the off chance that the people we lose are still somehow able to hear us, maybe we should never stop talking to them.”

“There was before you and there was during you. For some reason, I never thought there would be an after you.”

“It proves that time, distance, and devastation allow people enough opportunity to craft villains out of people they don’t even know.”

“Grudges are heavy, but for the people hurting the most, I suppose forgiveness is even heavier.”

“Reading is a hobby, but for some of us, it’s an escape from the difficulties we face. To all of you who escape into books, I want to thank you for escaping into this one.”

“A good person who had one bad night. It happens to the best of us. The worst of us. All of us. Some of us are just luckier than others, and our bad moments have fewer casualties.”

“We’re all just a bunch of sad people doing what we have to do to make it until tomorrow.”

“So, you decide right now, right here. Are you gonna live in your sadness or are you gonna die in it?”

“Now that I’ve forgiven myself, the reminders of him only make me smile.”

What is Reminders of Him by Colleen Hoover about?

Reminders of Him by Colleen Hoover is about a 26-year-old woman who is released from prison for involuntary manslaughter relating to the death of her boyfriend. She seeks to reunite with her daughter and find forgiveness for his death, but she is shut out by everyone except a local bar owner with a connection to all of them and just may be the only one who can help.

What is the main conflict in Reminders of Him?

The main conflict in Reminders of Him by Colleen Hoover is whether Kenna will reunite with her daughter, Diem, after her 5-year stint in prison for a crime she committed while she was pregnant with her.

What is the age rating for Reminders of Him?

The age rating for Reminders of Him by Colleen Hoover is Mature Adults ages 17 and over, as this book contains adult themes and content including tragedy, grief, incarceration, drug and alcohol use, and explicit romance.

What are the trigger warnings for Reminders of Him?

Trigger warnings for Reminders of Him by Colleen Hoover include drug and alcohol use, a car accident, grief, incarceration, depression, and neglect of a child.

Is Reminders of Him a stand alone book?

Yes, Reminders of Him by Colleen Hoover is a stand alone book that can be read on its own.

Is Reminders of Him a series?

No, Reminders of Him by Colleen Hoover is not part of a book series. It is a stand alone book that can be read on its own.

Is Reminders of Him steamy?

Yes, Reminders of Him by Colleen Hoover contains a few steamy, spicy scenes of explicit romance.

Is Reminders of Him a happy ending?

Yes, Reminders of Him by Colleen Hoover has a happy ending and all the storylines are tied up tightly at the conclusion of the book.

That concludes this guide to Reminders of Him: summary, characters, book review, quotes, and frequently asked questions.