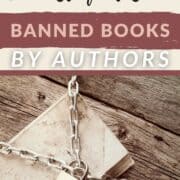 Get the best quotes on banned books from the authors themselves to learn and teach about the harms of censorship during Banned Books Week and beyond.

These banned books quotes are more important than ever, as banning books remains on the rise, especially here in the United States, where I am located. Books are most often banned now for LGBTQ+ themes, as well as racial and religious diversity, and sexual content. And most of these books are Young Adult fiction, like the bestselling, award-winning Black Lives Matter book The Hate U Give.

(Source: Banned in the USA: The Growing Movement to Censor Books in Schools)

So, who better to talk about freedom of written speech than the writers who have experienced it?!

Of note, I started this list of quotes about banned books begin with two important quotes from Salman Rushdie, just weeks after he was violently stabbed on stage.

Below are all the best quotes on banned books you need to know.

“What is freedom of expression? Without the freedom to offend, it ceases to exist.” – Salman Rushdie

“I think the level of danger [of publishing The Satanic Verses today] would have been exponentially higher in the age of the internet. You can spread hostility so fast now. We see that everyday in the way the internet is used as a force.” – Salman Rushdie

“I’m always sorry that people ban my books. Many times I’ve been called the most banned. Many times my books are banned by people who never read two sentences.” – Maya Angelou

“Censorship is the child of fear and the father of ignorance.” – Laurie Halse Anderson

“The thought that leads me to contemplate with dread the erasure of other voices, of unwritten novels, poems whispered or swallowed for fear of being overheard by the wrong people, outlawed languages flourishing underground, essayists’ questions challenging authority never being posed, unstaged plays, cancelled films — that thought is a nightmare. As though a whole universe is being described in invisible ink.” – Toni Morrison

“There are worse crimes than burning books. One of them is not reading them.” – Joseph Brodsky

“I hate it that Americans are taught to fear some books and some ideas as though they were diseases.” – Kurt Vonnegut

“Submitting to censorship is to enter the seductive world of ‘The Giver’: the world where there are no bad words and no bad deeds. But it is also the world where choice has been taken away and reality distorted. And that is the most dangerous world of all.” – Lois Lowry

“Reading develops cognitive skills. It trains our minds to think critically and to question what you are told. This is why dictators censor or ban books. It’s why it was illegal to teach slaves to read. It’s why girls in developing countries have acid thrown in their faces when they walk to school.” – Karin Slaughter

“Don’t get mad, get even. Don’t spend time waving signs or carrying petitions around the neighborhood. Instead, run, don’t walk, to the nearest nonschool library or to the local bookstore and get whatever it was that they banned. Read whatever they’re trying to keep out of your eyes and your brain, because that’s exactly what you need to know.” – Stephen King

“When you tear out a man’s tongue, you are not proving him a liar, you’re only telling the world that you fear what he might say.” – George R.R. Martin

“Think for yourselves and let others enjoy the privilege to do so, too.” – Voltaire

Read more from Stephen Chbosky: Quotes from Perks of Being a Wallflower

“There is more than one way to burn a book. And the world is full of people running about with lit matches.” – Ray Bradbury

“A dangerous book will always be in danger from those it threatens with the demand that they question their assumptions. They’d rather hang on to the assumptions and ban the book.” – Ursula K. Le Guin

Now you know all the most important quotes on banned books from authors themselves.