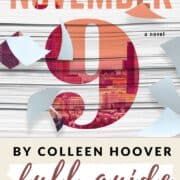 Explore this November 9 summary (WITH SPOILERS) of the popular book by #1 New York Times bestselling author Colleen Hoover for everything you need to know about her “same time next year” novel.

This November 9 summary acts as a study guide for the standalone book (one of Colleen Hoover’s best books), including:

Below is a full November 9 summary WITH SPOILERS, including the age rating, character guide, synopsis, review, and the top quotes.

November 9 by Colleen Hoover is most suitable for adults, as it contains sexual content, as well as drugs, alcohol, tragic deaths, and other adult themes.

Ben – the male lead, a writer

Below is a November 9 summary of the main plot points WITH SPOILERS:

Eighteen-year-old Fallon is an aspiring actress scheduled to move across the country from Los Angeles to New York the next day when she has lunch with her father, a famous television action named Donovan, who doesn’t approve of her career aspirations in light of a house fire that physically scarred her two years earlier.

Ben, an eighteen-year-old aspiring novelist, overhears the conversation and slides into the booth next to Fallon, pretending to be her boyfriend and urging Donovan to support her.

Fallon and Ben end up spending the rest of her final day on the West coast together, quickly falling for each other. To Ben, Fallon (and her story) is the creative muse he always yearned for in his writing career.

But, Fallon is set to move and further, she trusts her mother’s advice that she shouldn’t have a serious relationship until she is twenty-three years old.

So, they agree to meet on the same date each year that follows.

After the first year, they meet and discuss their career progress.

Their second year meeting begins with a phone call in which Ben tells Fallon that his oldest brother, Kyle, has died in a car accident. Fallon flies to California to support Ben, who has been living with Kyle and his pregnant wife, Jordyn, in their childhood home.

Fallon and Ben are intimate, and it seems a relationship will ensue. Ben wants to move to New York to be with her, but she believes it’s best for him to stay to support Kyle’s widow and child.

The third year, Ben brings his nephew to his meeting with Fallon and admits he’s now in a relationship with Kyle’s widow. Fallon leaves heartbroken.

On the fourth November 9th, Fallon refuses to meet with Ben, so her friend convinces her to go out to a club instead. Ben tracks her down at the club and tells her he has left Kyle’s widow to be with her.

They retreat to Ben’s apartment, where Fallon reads parts of Ben’s manuscript about their love story, which reveals that Ben set the fire that caused Fallon’s scars.

On the fifth and final anniversary on which they had agreed to meet, Fallon has gotten a restraining order against Ben, but he still leaves her his finished manuscript.

Fallon’s mother reads it and convinces her to read it. It explains that Ben’s mother committed suicide, and he blamed it on Fallon’s father, Donovan, who was dating her at the time and had broken up with her. So, Ben set fire to Donovan’s car, which spread to the house where Fallon was staying.

But, Ben later learned from his brother Ian that his mother actually committed suicide as a result of a terminal cancer diagnosis, so as not to burden her family with the mental, physical and emotional effects of her illness.

This gives Fallon a change of heart. She goes to the diner where Ben had been waiting for her, and they kiss.

I’m always the first to admit I am a tough critic of romance novels. Generally, my issue is that they are more idealistic than realistic and that they can lack character development. None of this is true for November 9 and so, I really enjoyed it overall.

Of course, the many tragic and traumatic links the characters in this book have to one particular day are far-fetched. But, all of the real-life themes of long-lasting love are there: from betrayal and forgiveness to accepting people for their pasts and managing prior trauma together.

I also loved that both Fallon and Ben focused on their career passions, self-fulfillment, and development during the young years of their lives in which they agreed to meet each year.

Lastly, I loved how one day that represented tragedy for two individuals could also eventually represent joy for them.

It’s not a perfect book, and some things bothered me, like Ben’s obsession with Fallon’s scars, which felt disturbing given the full storyline.

Overall, though, November 9 was one of my favorite Colleen Hoover novels, and Fallon and Ben remain memorable characters with a memorable, meaningful love story to me.

Below are the five best November 9 quotes:

“You can’t leave yet. I’m not finished falling in love with you.”

“One of the things I always try to remind myself is that everyone has scars, A lot of them even worse than mine. The only difference is that mine are visible and most people’s aren’t.”

“You’ll never be able to find yourself if you’re lost in someone else.”

“When you find love, you take it. You grab it with both hands and you do everything in your power not to let it go. You can’t just walk away from it and expect it to linger until you’re ready for it.”

“If we’re going to kiss, it has to be book-worthy.”

If you loved November 9, I think you will also love these books which contain similar “next time next year” tropes and/or tragic backdrops to a love story:

Below are answers to frequently asked questions about November 9 WITH SPOILERS:

No, November 9 by Colleen Hoover is not a Young Adult book. It is most suitable for adults, as it contains sexual content, as well as drugs, alcohol, tragic deaths via suicide and accident, crime, and other adult themes.

Does November 9 have romance?

Yes. November 9 is a modern “same time next year” romance between Fallon and Ben, who have a “will they or won’t they” relationship over the course of several years.

What are the trigger warnings for November 9?

Is Fallon a boy in November 9?

No. Fallon is the female lead in November 9 by Colleen Hoover.

Is Tate and Miles in November 9?

Who are Ben’s brothers in November 9?

In November 9, the male lead Ben’s two brothers are Kyle and Ian (who was also a character in another Colleen Hoover book, November 9).

What is Ben’s secret in November 9?

Ben’s secret is that he set the fire that caused Fallon’s scars. His mother committed suicide, and he blamed it on a breakup with Fallon’s father, who she was dating at the time. So, Ben set fire to Donovan’s car, which spread to the house where Fallon was staying. But, Ben later learned that his mother actually committed suicide as a result of her terminal cancer diagnosis, so as not to burden her family with the mental, physical and emotional effects of her illness.

Do Fallon and Ben end up together in November 9?

Yes. On their fifth and final agreed-upon meeting on November 9, Fallon forgives Ben and they kiss just before midnight.

Does November 9 have a happy ending?

Yes. While November 9 is filled with trauma, tragedy, and grief, it ends happily with Fallon and Ben getting together on their fifth and final yearly meeting, fully understanding each other’s pasts and agreeing to move forward together.

That concludes the November 9 summary.

If you enjoyed this November 9 summary, you will love these posts: