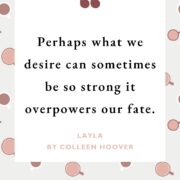 This Layla summary and review of Colleen Hoover’s bestselling paranormal romantic thriller explains exactly what happened in the book and shares how readers (including me) rate it.

Because it has paranormal elements, the plot can be a bit confusing compared to other Colleen Hoover books. That’s why I’m explaining everything in this Layla summary WITH SPOILERS. If you just want to see how it’s rated, skip ahead to the review at the bottom of the post.

FAQs About Layla by Colleen Hoover

What is Layla about?

Layla is a paranormal ghost romance and thriller book by Colleen Hoover. Leeds wants to spend his life with Layla, but he’s torn because she was left a different woman as the result of a violent attack.

When they retreat to a Bed and Breakfast, Layla’s behavior becomes downright bizarre, and that’s not the only odd thing happening in this place. Leeds meets a “guest” named Willow, and he starts falling for her, which ultimately leads to him learning the truth about what happened to Layla and the strange occurrences.

Is there a ghost in Layla?

Yes. In Layla, the male protagonist, Leeds, meets a ghost named Willow at the Bed and Breakfast where he and his injured girlfriend, Layla, are staying. He begins to fall for the ghost, which sets into motion a chain of thrilling events that reveal the truth about what happened to both Layla and Willow.

Is Layla by Colleen Hoover scary?

No. While Layla is a paranormal romantic thriller involving a ghost, it did not feel scary reading it. Most of it is light and romantic and, although it takes an especially thrilling turn towards the end, it felt more creepy or disturbing what was at the root of the paranormal activity than actually “scary” to read.

(The age rating for Layla is Mature Adults aged 17 and over.)

Below is a full Layla summary WITH SPOILERS.

In Layla, Leeds is a band musician who meets a woman named Layla when she’s dancing at her sister’s Bed and Breakfast wedding where he’s playing. After a chance romantic encounter, they end up staying together during the weeks that follow.

They fall in love, and Leeds believes it’s “forever,” but his fans aren’t happy he’s in a relationship with Layla. A violent shooting at one of his shows leaves Layla in the hospital for weeks and, upon her discharge, she seems like a different woman.

In an attempt to restore their relationship, Leeds rents the abandoned Bed and Breakfast, which is now up for sale, bringing an engagement ring with him. But when they get there, Layla’s behavior turns really odd, particularly around food, and more strange things start happening, like a pot getting pushed off the stove.

So, Leeds sets up cameras, which show Layla putting a blanket on him, even though she said she didn’t. Then, the camera faces the wall on its own.

That’s when Leeds decides to learn to communicate with the ghost. He plays the piano and, indeed, the ghost plays back. Via Leeds’ laptop, she further communicates that her name is Willow.

It turns out that Willow can take over Layla’s body to further communicate with Leeds. When she does this, Leeds starts falling for her.

At one point, when Willow leaves Layla’s body, Layla becomes alarmed and confused. Leeds wants to leave the house, but Willow seeks his help in figuring out what happened to her, and he agrees to stay. He’s a tired caretaker for Layla, and he has found sparks of happiness in Willow.

When Layla tries to leave, Leeds and Willow record a video explaining the situation to her, but Layla just thinks she’s being drugged. So, Willow enters Layla’s body and Leeds ties her to the bed, seeking personal help from a man named Richard, who he met in an online ghost forum. (In the book, this storyline is weaved throughout alternating from past to present.)

The man, also a ghost, helps them determine that Willow is actually the soul of Layla. When Layla was shot by Leeds’ obsessive ex, Sable, Leeds shot and killed Sable in defense. At this time, Sable’s soul entered Layla’s body, and Layla’s soul went to the B&B. This is why Layla seemed changed after the shooting, particularly around food (which was a struggle for Sable), and it is also why strange things happened at the B&B.

WARNING: THERE ARE SPOILERS BELOW.

What happens at the end of Layla?

I read Layla with the understanding I would have to suspend my logical beliefs, and I think this is what helped me enjoy the book. If you approach it from a place of real-world logic, you may struggle to enjoy the paranormal activity, which is akin to an episode of Stranger Things or the movie Ghost, which was actually heavily referenced in the book.

At first, it seemed a bit silly to me that Leeds was falling in love with a ghost, and I know some readers also struggle with the cheating aspect of this novel. Because I had already committed to suspending my real-world logic, the cheating didn’t bother me as much as it normally would.

But then, when I learned “what happened,” Layla became super thrilling, suspenseful, and intriguing to me. I thought it was a great paranormal twist, and I listened to the audiobook compulsively to see how it would all turn out since you can’t really predict these kinds of plotlines no matter how many thrillers you have read. They venture beyond the known to the unknown where anything is possible.

I left Layla feeling satisfied by the unique ghost story Colleen Hoover created, proving once again that she can write any type of modern romance novel.

If you loved this Layla summary and book review, you will love these posts:

Thank you so much for this spoiler synopsis. The story sounds absolutely repugnant without knowing what's going on, and it may still not be my cup of tea, but I think I'll find it significantly more tolerable with this knowledge.