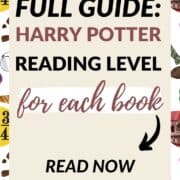 If you are confused about whether your child is ready to read the Harry Potter books, this is a full guide to the Harry Potter reading level (both age and grade) for each book in the beloved series about young wizards fighting evil. This guide also includes descriptions of some of the most difficult content in each book that may help inform your decision.

The Harry Potter books are the best-selling book series of all time, having been translated into over 80 languages, won countless awards, and sold more than 500 million copies worldwide.

There’s a range of information available as to the most appropriate Harry Potter reading level, and it both differs and sometimes is too generalized. Plus, it will also depend on the particular child, so my intent with this reading level guide is to synthesize the information and provide enough details for you to make your own decision.

A few general items to note about the Harry Potter reading level generally:

While these books have a child-like whimsy with lots of magic, they also contain increasingly heavier thematic elements like death and darkness, as well as fight scenes and scary creatures. The books themselves also get longer as the series progresses.

This Harry Potter reading level guide first answers frequently asked questions about the age and grade at which each book in the list should be read, then shares more details about specific content warnings for each book.

What age is appropriate for reading Harry Potter?

Generally speaking, The appropriate age for reading each book in the Harry Potter series is:

What grade level are the Harry Potter books written at?

Is Harry Potter YA or Middle Grade?

The Harry Potter book series is Middle Grade, not YA (Young Adult). This means it is generally written for children ages 8-12 and grade levels 3-7.

Below are specific content warnings for each book in the Harry Potter, so you can see more clearly why each book is recommended for a particular age and grade.

At the end of the day, the recommendations are just that — recommendations. I hope you can use this information to make your own personal decisions about when a particular child should read each book in the Harry Potter series.

The reader learns that Harry’s parents have died, which can be difficult for some children to understand. Blood and drunkenness are mentioned, and the reader meets creatures like a three-headed dog, a hooded figure over a dead unicorn, and a menacing troll. Lastly, there is a fight scene between Harry and the force of evil in the series, Voldemort.

Generally speaking, this first book is the lightest and shortest book in the series. Despite the more difficult content above, Harry is more often learning magic, making friends, and playing the sports game Quidditch. Fairly young kids can likely read it, particularly if they are mature and/or show an interest in the series.

Book #2: Harry Potter and the Chamber of Secrets

In the Forbidden Forest, they meet a giant spider, and there’s also a ghost in the bathroom. Harry then enters the Chamber of Secrets in an attempt to save Ron’s sister, Ginny, where Voldemort sets a giant serpent on Harry, and a battle ensues.

A few other content warnings include blood and petrification of students.

It’s pretty similar in terms of content level to the first book, so both can be read by younger readers around age 8+ and grade 3+. If a child had no problem with book #1, it’s likely they will do just fine with book#2 as well.

Book #3: Harry Potter and the Prisoner of Azkaban

Harry Potter and the Prisoner of Azkaban is the book in which Harry faces his fear of dementors (murderous, flying, dark creatures) and a serial killer is introduced.

The themes begin to progress in this book, but it isn’t incredibly advanced. A child can likely read it without issue at a slightly older age than the first two books.

Book #4: Harry Potter and the Goblet of Fire

Harry Potter and the Goblet of Fire is markedly more advanced than the first three books in the series, specifically so because it involves the death of a student who plays a minor role in the story.

While it also has a lot of fun elements, like the Quidditch World Cup and the Yule Ball, the student death in this novel really changes the tone of the series and conveys the theme that endings aren’t always happy in life, which will definitely be difficult for many children to understand.

This is the book in the series where I would start to think more deeply about whether a child is ready to read it, or even discuss the content with him or her beforehand. Of note, this book is also quite long for a younger child.

Book #5: Harry Potter and the Order of the Phoenix

There’s another death of a more prominent character important to Harry, as well as more violence, underage drinking, cursing, torture, and a snake attack.

Likewise, it’s similar to book #4, if not a bit darker and sadder.

Harry Potter and the Half-Blood Prince unveils Voldemort’s origin story in order to prepare Harry for his ultimate battle with Voldemort. Accordingly, as well as the violence and darkness progressing, the reader is also exposed to the emotional burdens Harry must face in his lonesome battle of good vs. evil.

Romance also heats up in this novel, but it remains fairly light and early teen-like.

One really fun element is the introduction of the magical Marauder’s Map.

The reader should be advised of a very devastating death of a beloved prominent character featured throughout the series, as well as more violence and blood, and zombies.

It’s recommended for age 11+ and grade 6+, and I will note that it’s most important here to consider how well a child can handle the death of a prominent character as well as the real-life meaning of good versus evil and Harry’s emotional struggles.

Harry Potter and the Deathly Hallows is the stage for the ultimate battle between Harry and Voldemort. In addition to the gravity of this battle both physically and emotionally, keep in mind that Harry and their friends are now 17 years old and the novel is nearly 800 pages. So, a child should really be nearing high school to read this final book in the Harry Potter series.

There are many deaths (both major and minor), including violence, murder, bloodshed, and even the death of a pet.

The life lessons in the series, as well as character motivations, are also shared with much more depth, showcasing the meaning of life and death, courage, and loyalty in much more advanced ways.

In other words, it’s not just about Harry’s magical battle between good and evil, but also what it all means in the grand scheme of life, and how Harry has changed and matured over the course of the series.

That concludes this comprehensive guide to the Harry Potter reading level.

If you loved this Harry Potter post, you will love these posts: