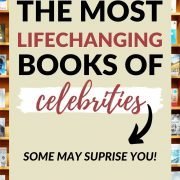 One book can change your life. And I love seeing what favorite books of celebrities demonstrate tangible impact on our favorite famous people, many of whom are very bookish themselves! I think it helps us think about what books changed our own lives.

Below are the favorite books of celebrities, with a focus on not just books they liked, but books that had real meaning.

Daniel Radcliffe's Pick: "The Old Man and the Sea" by Ernest Hemmingway

The famed star of the Harry Potter movies goes to the classic "The Old Man and the Sea" because it stayed with him and resonated for a long while afterward -- the mark of influence.

He said, "I read it for school, and it speaks to the power of the book that I could analyze the bugger out of it and still not fall out of love with it.”

Dolly Parton's Pick: "The Little Engine That Could" by Watty Piper

Dolly Parton grew up with next to nothing, so I love the fact that she was so inspired by "The Little Engine That Could." She picked it, "[b]ecause I’m the little engine that did. I always say that 'I thought I could, I thought I could' and 'I think I can, I think I can, and I still think I can.' So I think that’s a great little inspirational book. It really kinda sums me up pretty good.”

Sometimes the simplest of books have the biggest impact on a person's mindset, and I think it's safe to say Dolly "could" and "did" achieve the biggest of dreams.

It's no surprise that socially conscious Harry Potter movie actress Emma Watson has said the classic children's book with philosophical themes, "The Little Prince," has changed her life, as an allegory of the human condition.

She said, "Just like playing a song, picking up a book again that has memories can take you back to another place or another time."

Escapism is a powerful force that a book can hold in a person's life.

Jeff Bezos' Pick: "The Remains of the Day" by Kazuo Ishiguro

Amazon CEO Jeff Bezos was changed by the book "The Remains of the Day" because of its transformative power. The story follows the unrequited romance of a butler, whose biggest goal is to honor his master and the house he served, from World War I through the 1950s.

Of the book, Bezos has said, "[Y]ou can't help but come away and think, I just spent 10 hours living an alternative life and I learned something about life and regret."

Perhaps this lesson learned has influenced the risky business decisions Bezos has made to propel Amazon to its powerhouse status.

J.K. Rowling's Pick: "The Woman Who Walked Into Doors" by Roddy Doyle

Acclaimed Harry Potter author J.K. Rowling has said that "The Woman Who Walked Into Doors" is "the most remarkable book" because Doyle, a heterosexual man, so fully captured a female character in such subtle ways.

It makes one wonder how this book influenced this female author's characterizations of one of the most beloved male literary characters of all time, Harry Potter.

This is a case of "when life imitates art." Actress Keira Knightley, who played "Pride and Prejudice" heroine Elizabeth Bennet in the movie adaption of this classic book cites this love story as the book she has "been obsessed with" since age 7. It's also on the Rory Gilmore book list.

I especially recommend the audio version of this book, read by Rosamund Pike.

Lady Gaga's Pick: "Letters to a Young Poet" by Rilke

I suppose nothing says "life-changing" like a book you read every day, which Lady Gaga does with Rilke's "Letters to a Young Poet" --  timeless works about poetry, sensitive observation, and the inner workings of the heart. It's also on the Rory Gilmore book list.

And we can certainly count on Lady Gaga for her poetic lyrics and artistic expression.

Like Emma Watson, socially conscious Meghan Markle picked the superb short novel "The Little Prince" as a book that has changed her life. This is, without a doubt, a favorite book of celebrities. In particular, the chapter about The Little Fox "unearths a truth in [her] that is always worth the check-in."

A philosophical book that is an allegory of the human condition makes you think and re-think about your truth is bound to change your life. We see this book's influence in Markle's charity work.

The former First Lady of the United States, Michelle Obama, has credited "Song of Solomon" by Toni Morrison changed her life because, as one of the first books she loved, it created a lifelong love of reading in her.

She said, " And that book helped me love reading because before then reading was kind of like something you did when you had to do it. But that book, it like grabbed me and pulled me and I just kept reading and kept reading."

I love any book that changes a person into a lifelong reader!

Oprah Winfrey's Pick: "The Seat of the Soul" by Gary Zukav

Booklover Oprah Winfrey recommended dozen of books in her book club over several decades, but the one book that she has said profoundly changed her life and career was "The Seat of the Soul."

When she was a few years into her talk show and producing less serious content, Oprah read this book and grabbed hold of the idea that every thought, feeling, and action is motivated by intention. She called this an “aha! moment,” and from that moment, questioned the intention behind everything she chose, including the content she produced, when then moved more into an educational and spiritual realm.

As an avid follower of Oprah, I have heard her discuss "intention" countless times. This concept has not only changed Oprah's life but also mine. When I started this blog, I considered the public platform very seriously and solidified my intentions for the blog in writing. Like Oprah, I also consider "intention" with every piece of content I produce.

TV writer and actress Mindy Kaling was so influenced by the works of Jhumpa Lahiri that she named her character in The Mindy Project Mindy Lahiri.

It's definitely one of the best Asian American (AAPI) books and it's easy to see how this book inspired Mindy Kaling to give Indian-American women a voice in film.

Multi-hyphenate actress, business owner and producer Reese Witherspoon's life was quite literally changed by the book "Wild" by Cheryl Strayed.

She said, "It's the first book that I optioned to turn into a movie that I was producing and starring in. I was really nervous and I asked Cheryl if it would be okay to option her book, but I didn't really have a track record as a producer, but she took that leap of faith with me and I'll be forever grateful."

It's also on the Rory Gilmore book list. We can thank this book and bold move for the many of Reese's book club books and books-turned-movies/tv shows that she has since brought to life.

Sheryl Sandberg's Pick: "A Wrinkle in Time" by Madeleine L'Engle

Facebook CEO Sheryl Sandberg has credited "A Wrinkle in Time" as her favorite book as a child.

It's no surprise that this story about a fearless young girl influenced the life of someone who became a fearless woman whose leadership inspires women across the world.

Shonda Rimes' Picks: "Columbine" by Dave Cullen and "The Stand" by Stephen King

Famed tv writer Shonda Rimes has been so thoughtful in describing the many books that changed her life, and these are some of the best favorite books of celebrities.

She has said that "Columbine" convinced me to tell a hard story. I wanted to end the sixth season of Grey’s Anatomy with a hospital shooting, but I was worried about the portrayal of violence and how to convey the deeper message to the audience. Then I came across this book by Dave Cullen. Reading it broke my heart open. It’s not about a shooting as much as it’s about what happens to people who survive this kind of tragedy. It’s written with raw honesty that helped me glimpse the emotional toll this kind of event can have. ”

Grey's Anatomy fans everywhere will recall the episode inspired by this book.

Likewise, Grimes credits "The Stand" by Stephen King as the book that "taught me how to suck people in." She said, "Honestly, I feel like I learned some of the best storytelling rules from his books.”  I think it's safe to say countless of Grimes' characters have since sucked us all in.

Those are the favorite books of celebrities, with a focus on life-changing books, not just books they liked. Can you see their impact? Does it make you think about which books had a tangible influence on your own life?

Pin this post to Pinterest because you can refer back to it when you are in the mood for a book that just may change your life, based on the favorite books of celebrities.