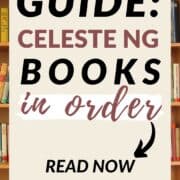 Explore these reviews of the Celeste Ng books in order so you can decide which one to read first or next.

Celeste Ng (pronounced “Ing” according to her Instagram handle: pronounced_ing) is a Harvard-trained, #1 New York Times bestselling and multi-award-winning author of diverse modern literary fiction. She’s also the only author (at the time of posting) to have TWO of her books selected as Reese Witherspoon’s book club picks.

Ng is known for her beautiful literary prose and for tackling issues related to family and motherhood and the Asian American experience.

I have read and now review below all of the Celeste Ng books in order so you can learn more about each one and decide what to read first or next.

Everything I Never Told You begins by telling the reader that sixteen-year-old Lydia is dead. The backstory to this shocking revelation is that of a mixed-race Chinese-American family in 1970s Ohio, where Lydia was the beloved middle child.

As the reader will learn what happened to Lydia, the book is not truly a mystery, but rather, it’s a sweeping characterization of the remaining members of her family, coping with her death, and revealing their own pasts and secrets, in an effort to understand how they got there and how they can move forward.

Mixed-race marriages were still uncommon at that time, and the novel explores the backgrounds of Lydia’s parents (and their families) which led them to each other, as well as how all of those events, feelings, and familiar relationships impacted the lives of Lydia and her siblings, both in the past and present.

It was recommended to me when I was first getting back into reading, and it holds a special place in my heart as being one of “those” books — the kind that keeps you captivated and makes grand statements about life through beautiful prose.

“Sometimes you need to scorch everything to the ground, and start over. After the burning the soil is richer, and new things can grow. People are like that, too. They start over. They find a way.”

Little Fires Everywhere takes place in a Shaker Heights, Ohio, planned community in the 1990s, where “do-gooder” Elena Richardson, the matriarch of a white upper-class family lives with her husband and four teenage children.

The story begins not just with a little fire, but with the Richardson home being burned to the ground. Then, it dives back into how the characters got there.

It all started when Elena rented a duplex to a Black single mother, Mia Warren, and her teenage daughter, Pearl. As the two families bond, the mothers begin to clash when a heated custody battle over an Asian American baby in their community places them on opposing sides of the aisle.

Dark secrets are revealed, and Elena’s and Mia’s families are jeopardized in the process of touching upon difficult issues of motherhood, class, race, and identity in this small suburban neighborhood. And, as the reader knows from the first page, the results are explosive.

Little Fires Everywhere is a very character-driven novel that you will find yourself reading compulsively, then thinking about for years to come in your life (I certainly did!) The HULU tv series adaptation is also absolutely fantastic.

Our Missing Hearts is a dystopian novel told through the eyes of twelve-year-old Bird, an Asian American boy who lives with his father after his Chinese American mother, a poet, left three years earlier.

Bird’s world is one in which the Preserving American Culture and Traditions Act results in the children of Asian dissidents being relocated.

A cryptic letter he receives sends him on a journey to find his mother and, in the process, Bird explores the intersection between these laws and his mother’s art, as well as the effects of the laws on real American families, and how change may ultimately come.

This book has stunning prose, and it felt very timely to me, leaving the modern reader with a lot to think about. It did feel slow-paced to me and lacked the character depth of her other novels, but I did enjoy it overall, especially actress Lucy Liu’s heartfelt narration of the audiobook and the powerful ending to which the story builds up.

Those are all the Celeste Ng books in order.

Pin this post to Pinterest because you can refer back to it when you want to read more Celeste Ng books.