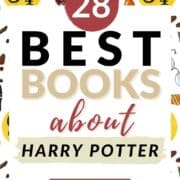 Explore all the best books about Harry Potter for the most magical fans who want even more to read from the wizarding world.

The Harry Potter book series has sold over 500 million copies to date and so, if you already read the original books, you are not alone!

The books about Harry Potter book are companion books for those who want to read and learn even more about the wizarding world. The focus is on J.K. Rowling’s related books, officially-licensed lifestyle books, behind-the-scenes books about the movies, interactive books, and highly-rated books.

There’s something magical for every witch and wizard here!

The Best Books About Harry Potter

Below are answers to a few frequently asked questions followed by details about all the best books about Harry Potter to read after you finish the original book and/or movie series.

What books are associated with Harry Potter?


The seven books in the Harry Potter book series in order are:

(Learn how to read the Harry Potter series for free.)

Are there any books related to Harry Potter?

Below are more specific details about the best books about Harry Potter.

Fantastic Beasts and Where to Find Them by J.K. Rowling

Fantastic Beasts and Where to Find Them is the first in the series that introduces the magical beasts of the wizarding world. Some of the beasts will be familiar to Harry Potter fans, like the Hippogriff, and others are new for you to learn about.

Fantastic Beasts: The Crimes of Grindelwald — The Original Screenplay by J.K. Rowling

Fantastic Beasts: The Crimes of Grindelwald — The Original Screenplay follows Grindelwald’s escapes and gathering of pure-blood wizards up to rule over all non-magical beings.

In an attempt to thwart Grindelwald’s plans, Albus Dumbledore enlists Newt, his former Hogwarts student, who agrees to help.

Fantastic Beasts: The Secrets of Dumbledore

Fantastic Beasts: The Secrets of Dumbledore follows beloved Hogwarts professor Albus Dumbledore as he tries to stop the powerful Dark wizard Gellert Grindelwald from gaining control of the wizarding world.

Once again, he entrusts Magizoologist Newt Scamander to lead the team of wizards, witches, and even a Muggle baker on the risky mission.

Harry Potter and the Cursed Child by J.K. Rowling

Harry Potter and the Cursed Child is the official playscript of the original West End production, which chronicles the return of Harry Potter, Ron Weasley, and Hermione Granger nineteen years after they saved the wizarding world.

As Harry continues to struggle with his past, his youngest son, Albus, must cope with the legacy of his family. Together, they race through time to battle mysterious forces that are leaving their futures uncertain.

This edition includes the final dialogue and stage directions of the play, a conversation piece between director John Tiffany and playwright Jack Thorne, the Potter family tree, and a timeline of events leading up to the story.

Harry Potter: The Character Vault is a full-color companion book to all the key characters in the Harry Potter movie series, filled with behind-the-scenes photos and illustrations of everything from costumes to makeup and weaponry.

Harry Potter Coloring Book is a nearly 100 page coloring book for children (or adults) to color everything they know and love from the wizarding world, including the Hogwarts school, the Forbidden Forest, and the Triwizard Tournament.

Harry Potter: Crafting Wizardry: The Official Harry Potter Craft Book provides over 25 step-by-step, illustrated crafts and activities inspired by the Harry Potter films for a range of skill levels. Make your own wand, decorate your home, and more with these creative crafts.

Harry Potter: A History Of Magic By British Library

Harry Potter: A History Of Magic celebrates the 20th anniversary of the series by exploring the subjects taught at Hogwarts: Potions & Alchemy, Divination, Care of Magical Creatures, and more. Take a close look at historical artifacts and items from J.K. Rowling’s personal archive, as well as stunning original artwork.

Harry Potter: A Journey Through a History of Magic by British Library

Harry Potter: A Journey Through a History of Magic is the official companion book to the British Library exhibition. Discover the truth behind the Sorcerer’s Stone, dragons, and trolls; examine wands; and behold the oldest atlas of the night sky.

Harry Potter: Knitting Magic: The Official Harry Potter Knitting Pattern Book contains over 25 authentic Harry Potter knits based on the movies, including scarves and other clothing, home goods, and keepsakes.

Harry Potter: Magical Places from the Films: Hogwarts, Diagon Alley, and Beyond by Jody Revenson

It is bound in a debossed leatherette case and features a map of Diagon Alley folded in an envelope, and “The Paintings of Hogwarts” catalog.

Harry Potter Page To Screen: The Complete Filmmaking Journey is a massive (500+ page) look at the entire moviemaking process that transformed the book series into a movie franchise. It features tons of exclusives and behind-the-scenes information, including new cast interviews and concept illustrations for the biggest Harry Potter superfans.

Harry Potter: A Pop-Up Book is one of many Harry Potter pop-up books with original artwork based on the films, giving the reader a truly interactive experience.

Illustrated Edition: Harry Potter and the Sorcerer’s Stone is the first of many illustrated editions of the Harry Potter book series, bringing the stories to life in a more visual way for readers of all ages with over 100 stunning color illustrations.

Hogwarts: An Incomplete and Unreliable Guide by J.K. Rowling

Hogwarts: An Incomplete and Unreliable Guide is a collection of J.K. Rowling’s writing originally featured on pottermore.com. Rowling also reveals her inspiration and insight into the wizarding world as she takes you on a journey through Hogwarts.

LEGO Harry Potter The Magical Guide to the Wizarding World is one of many LEGO-themed Harry Potter books that combines the worlds of LEGO and Harry Potter to recreate memorable movie moments in a new way.

Marauder’s Map Guide to Hogwarts is a guidebook to the secrets of Hogwarts that includes a wand-shaped invisible ink pen with UV light, fold-out pages of the Marauder’s Map, and a parchment to make your own magical map! This interactive book will have you “up to no good!”

Quidditch Through the Ages: The Illustrated Edition by J.K. Rowling

Quidditch Through the Ages dives into the back story of the beloved sport, telling the history of the Gilden Snitch and more, with illustrations from an award-winning artist.

Short Stories from Hogwarts of Power, Politics and Pesky Poltergeists by J.K. Rowling

Short Stories from Hogwarts of Power, Politics and Pesky Poltergeists is another collection of J.K. Rowling’s writing, including stories about the darker side of the wizarding world, including the roots of Professor Umbridge, the history of the wizarding prison Azkaban, and more.

The Tales of Beedle the Bard by J.K. Rowling

The Tales of Beedle the Bard is a book from the Hogwarts Library that serves as a collection of fairy tales for young witches and wizards, accompanied by notes from Professor Dumbledore.

The Unofficial Harry Potter Joke Book: Great Guffaws for Gryffindor is a highly-rated book that contains hundreds of jokes and over 50 illustrations for the funniest Harry Potter fans.

The Unofficial Ultimate Harry Potter Spellbook is a stunning, epic guide to all the 240+ spells cast in the Harry Potter films, books, video games, and card games, as well as the official Harry Potter spinoffs, such as Fantastic Beasts and Where to Find Them.

Those are all the best books about Harry Potter.

Shop this entire list of Harry Potter-related books on Amazon in one spot.