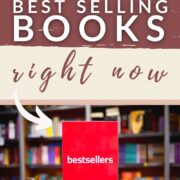 Explore the best selling books right now to quickly and easily decide what to read next based on what everyone else is loving at the moment.

It can actually be tough to figure out what books are best sellers right now because the various retailers and sources use varied metrics plus often break the lists down into different categories. So, what I have done is scoured the following lists of the most popular books right now to figure out which books were most common to all of these sources:

It actually became quickly clear which books rose to the top overall, and that’s exactly what you’ll find below.

A few important things to note:

First, I ONLY included adult titles, both fiction and nonfiction, based on what I believe readers of this website are most likely looking for in this type of article.

And, when in doubt, I gave a bit more weight to the list of Publishers Weekly, which is based on the data of NPD BookScan, which covers about 85 percent of trade print books sold in the United States through direct reporting from major retailers.

Additionally, I will keep this list of the top selling books right now as updated as possible over time. You can always check the “last updated” date at the top of this post for reference.

I always keep track of what books that readers of this site are buying most often so I can recommend these popular books more often to readers, who are likely similar in taste. And I thought this particular combination of data would be a helpful resource for readers to refer back to over time.

There’s some overlap in the two groupings, but I think that’s a good thing because it can help you further see what books are the most universally “hot” at this time. The goal here is simply to help you find a great book to read next based on the most trending books right now.

Below are the top ten best selling books (fiction and nonfiction) based on an analysis of data from major retailers and resources (in alphabetical order):

Atomic Habits by James Clear: Perhaps the New Year (and the resolutions that come with it) has given an added boost to this mega-bestselling self-help book that’s been the “habits Bible,” so to speak, for several years now. Atomic Habits is a must-read for everyone that’s filled with both insightful and truly practical advice to actually make positive changes in your life.

Demon Copperhead by Barbara Kingsolver: This recent Oprah’s Book Club selection hails from a popular author, and it’s premised upon the work of another bestselling author. Based on David Copperfield by Charles Dickens, this particular story is set in modern-day Appalachia, and it’s at the top of my wish list.

Fairy Tale by Stephen King: The latest work of the masterful King has been a massive hit with fans since its release in September 2022. It’s a classic story of good versus evil in a parallel world, which has implications in the real world.

I’m Glad My Mom Died by Jennette McCurdy: It’s hard to deny the popularity of this former Nickelodeon star’s memoir of her stage mom and everything from eating disorders to child predators. Yes, it really is THAT good. You’ll turn the last page wanting to talk to someone about it ASAP.

Lessons in Chemistry by Bonnie Garmus: This GMA book club pick was also one of my top reads of 2022, and it was also a really fantastic debut novel, both fresh and engaging, as it follows the life of Elizabeth Zott, a 1960s chemist whose unpredictable life leads her to become a single mother and the star of a cooking show, where she changes the status quo.

The Light We Carry by Michelle Obama: This former First Lady is a pillar of strength in many ways and, in this book, she draws upon her experiences to overcome all kinds of obstacles, find strength and confidence, and make meaningful changes in our lives and communities. If you still “go high” when others go low, based on her advice, you will likely love this book.

Spare by Prince Harry: This memoir had the best selling first week of a nonfiction book EVER in January 2023. It’s best listened on audio, as he himself narrates his own very personal and unprecedented story of grief, fame, royalty, family dysfunction, and true love. Is it worth it? 100% yes.

Verity by Colleen Hoover: My personal favorite of Colleen Hoover’s books is this twisted and jaw-dropping thriller about a woman hired to ghostwrite for a bestselling author, who has been severely injured and has left behind what appears to be either a factual letter or fictional manuscript detailing a very sinister story. It will shock you and then leave you debating whether it was real.

Below are the ten best-selling books right now with readers of this website. Most readers are women of all ages from the United States. However, a few of these books have also become popular as some of my favorite books for men.

In addition to the books already referenced above, below are a few more details about the books unique to this listing:

Beneath a Scarlet Sky by Mark Sullivan: This harrowing World War II novel is based on a true story and set in the Italian alps, following a young man who helps Jews escape, then is forced to enlist as a German soldier. It’s a must-read for fans (both men and women) of historical fiction and fans of The Nightingale.

November 9 by Colleen Hoover: This romance novel explores the relationship between two young adults, a writer and his muse, who was scarred in a house fire, over the course of five November 9s, a day on which they agree to reconnect each year. But there’s so much more to the significance of this date in both of their lives, and the truth may make them or break them. I personally loved this book of hers!

Regretting You by Colleen Hoover: This Hoover novel is less romantic than her other novels, but rather it feels more like an exploration of grief and family. It was less explicit as well. I really liked this one too!

Reminders of Him by Colleen Hoover: In this Hoover novel, a woman released from prison struggles to reconnect with her daughter and rebuild her life, when she meets a local bar owner who offers her hope. It’s one of the more gripping and emotionally complex love stories she’s written, with themes of grief, redemption, and forgiveness.

Shoe Dog by Phil Knight: This memoir of the founder of Nike delights readers, both male and female, for its honest and engaging story behind one of the world’s most famous brands. I don’t know anyone who didn’t like it and, in fact, it’s my husband’s favorite book.

Ugly Love by Colleen Hoover: If you like the more emotional, heart-tugging books by Colleen Hoover, you will probably like Ugly Love. It’s a “no strings attached” relationship that becomes complicated when one person wants more and the other is coping with an incredibly painful past.

Those are the best selling books right now based upon my unique data analysis to help you find your next great read. I will continue to update it over time!

Pin this post to Pinterest because you can refer back to it when you want to read the most popular books at any given moment.