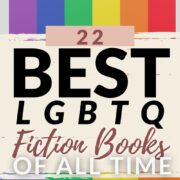 Read the best LGBTQ novels of all time for Pride month, Banned Book Week, and beyond based on books I personally read and loved and those most frequently read and loved within the book community.

First, I share the best LGBTQ books I personally read and loved, and they all happen to be some of my favorite books of any genre — the kind of books that truly leave a mark on you forever. I truly believe you cannot go wrong with any one of these best LGBTQ novels.

Then, I share books I have not yet read, but that are really popular within the book community.

In both sections, I tried to focus on novels where LGBTQ storylines were more in the forefront of the narrative.

What LGBTQ books should I read?

The best LGBTQ books everyone should read are:

You may have seen the movie, but have you read the book? Technically, Brokeback Mountain is a short story, but since it’s an epic fictional saga taking place over several decades and since it’s SO good, I decided to include it here in this list of the best LQBTQ novels.

I read it after seeing the movie, which made a huge impact on me. This story of two male ranch hands who come together in romance one lonely Summer, then continue to meet each year as they otherwise live their lives as if they are heterosexual, is beautifully told and is bound to haunt you for decades to come.

The Great Believers by Rebecca Makkai

The Great Believers is another one of the best LGBTQ novels that made a huge impact on me and hasn’t left my mind since I read it. I like to recommend it to fans of the Broadway musical Rent.

Set amidst the AIDS pandemic of the 1980s and 1990s, it exquisitely weaves the beauty of art and what remains together with the tragedies of friends and lovers dying off one by one.

One chapter, in particular, is one of the most poetic works of fiction I have read. (You’ll know which one it is when you read it — trust me.)

For more information, read my full review of The Great Believers.

The Guncle by Steven Rowley

The Guncle was a “Bookstagram made me do it” book for me because it seemed everyone there was raving about it. I’m happy to report that it did not disappoint!

It’s the story of a formerly famous Hollywood actor who takes on the care of his young niece and nephew after a family tragedy. He’s coping with another tragic loss of his one great love at the same time and, in ways both comical and heartwarming, the Summer brings together this unlikely trio as they begin to heal.

The Heart’s Invisible Furies is a book that tops many avid readers’ list of favorite books of all time. It’s a character-driven novel that follows a gay man in Ireland from the 1940s to the present day, as he copes with his sexuality during turbulent times and places in history.

At the same time, it tracks his estrangement from his unwed Catholic teen mother throughout the decades.

Overall, I can assure you that the dialogue will be some of the most perfectly written you will ever read.

The Immortalists by Chloe Benjamin

The Immortalists is one of my all-time favorite books about death, dying, and grief. It’s the decades-long story of four siblings whose dates of death are predicted when they are children.

This book will take you on a journey and make you think about major life questions at the same time. For more information, read my full review of The Immortalists with book club questions.

The Seven Husbands of Evelyn Hugo by Taylor Jenkins Reid

The Seven Husbands of Evelyn Hugo is my favorite book by the bestselling author Taylor Jenkins Reid (and I have read them all), and it’s the one book I most often recommend because everyone loves it.

It’s the story of an aged, glamorous Hollywood actress recounting her life story and the truth behind each of her infamous seven husbands. So, what’s LGBTQ about that? Well, I hate to be vague, but I really think you need to read the book to learn that. Trust me, it’s worth it.

For more information, read my full review of The Seven Husbands of Evelyn Hugo.

This Is How It Always Is by Laurie Frankel

This Is How It Always Is is a Reese’s book club pick that, I swear, everyone loves. I honestly don’t think I have ever heard anyone dislike it or even give it a mediocre review.

At its core, it’s about the process of parenting a very young transgender child. The reader goes along for the journey and gets to step in the family’s shoes, as they try to figure it all out as they live it. It’s intimate and tender, written from the personal experience of the author.

More of the Best LGBTQ Novels

Below are more LGBTQ novels for you to consider. I have not personally read these books, but they are so popular that I wanted to include them in case one sparks your interest as it did for so many other people.

Boyfriend Material is the first in a two-part series. It’s a beloved British romantic comedy about two men faking a relationship in order to rebuild an image.

Call Me By Your Name by Andre Aciman

Call Me By Your Name has been on my “to be read” list forever, due in great part to the Oscar-winning movie adaptation. It’s a coming-of-age story about a relationship between an adolescent boy and a summer guest at his parents’ Italian cliffside mansion, and it’s filled with consequences.

Felix Ever After by Kacen Callender

Felix Ever After is a popular Bookstagram book about a Black, queer, and transgender person looking for love while maintaining pride for a unique identity at the same time.

The Hours by Michael Cunningham

While I didn’t read The Hours, I recall watching the movie adaptation and liking it. It’s the intertwining story of three women: author Virginia Woolf, beginning to write Mrs. Dalloway in 1923; Clarissa Vaughan, beloved friend of an acclaimed poet dying from AIDS in modern-day New York; and Laura Brown, who feels the constraints of a perfect family in suburban Los Angeles 1949.

I Kissed Shara Wheeler is the newest kid on the block from an author you’ll find on this list three times. It’s getting a lot of hype for being a modern-day Pretty Little Liars meets The Breakfast Club with an LGBTQ twist.

A Little Life by Hanya Yanagihara

A Little Life has also been on my TBR list forever. It’s much raved about, but it has been tough for me to pick up because it tops 700+ pages!

Four ambitious but broke college classmates deal with addiction, success, and pride over the decades, held together by their devotion to a man scarred by childhood trauma.

Memorial was a Good Morning America book club pick about a male couple struggling in their relationship. One then visits Japan to visit his dying father, leaving behind his partner and his mother as unconventional roommates.

Winner of the 2003 Pulitzer Prize for Fiction

Middlesex has been on my radar for about two decades as an Oprah’s book club pick, as well as a book referenced on Gilmore Girls, about growing up female but struggling between male and female identity.

One Last Stop by Casey McQuiston

One Last Stop got a lot of good buzz on social media and has an intriguing plotline. It’s a magical romance between two women who meet on a train in New York, with one doing everything she can to save the other who is lost in time.

The Picture of Dorian Gray by Oscar Wilde

The Picture of Dorian Gray is a classic that’s been on my list forever, but I only recently learned it has LGBTQ subtexts. When I finally do pick up this 1890 novel, it will be interesting to read this exploration of the myriad interrelationships between art, life, and consequence given this fact.

The Price of Salt by Patricia Highsmith

The Price of Salt is a cult classic based on a true story, and it tells the story of an unhappy female department-store worker, whose life is changed by the appearance of a customer, trapped in suburban family life, who comes in to shop for a Christmas gift for her daughter.

The Prophets by Robert Jones, Jr.

The Prophets received a ton of buzz when it was published. It’s a unique and difficult story about the forbidden union between two enslaved men on a Deep South plantation.

For a while, it seemed like everyone was talking about Red, White & Royal Blue on Bookstagram. The storyline is such a fun one, as America’s First Son falls in love with England’s Prince of Wales.

Written in the Stars by Alexandria Bellefleur

Written in the Stars is another book that got a lot of great press. The first in a series, it’s a queer rom-com about an astrologer who fakes a New Year’s relationship with an actuary, with nods to Bridget Jones’s Diary and Pride & Prejudice.

You Should See Me in a Crown

You Should See Me in a Crown is a popular Reese’s YA book club pick about an awkward teen girl who runs for prom queen only to vie for a scholarship, but ends up falling for another contestant.

Those are all the best LGBTQ novels of all time.

Shop my top picks for the best LGBTQ novels on Amazon now.