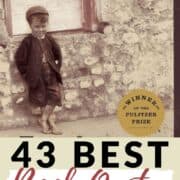 Get the most shocking Angela’s Ashes quotes you simply must read to learn about themes of poverty, social class, religion, and more in this beloved modern classic bestseller.

Angela’s Ashes is the Pulitzer Prize–winning, #1 New York Times bestselling memoir of Frank McCourt, about his childhood in Ireland. It also won the National Book Critics Circle Award and the Los Angeles Times Book Award, and it is on both the Gilmore Girls reading list and The Office’s Finer Things Club reading list.

McCourt’s story is an astonishing one of survival. Born in Depression-era Brooklyn to Irish immigrants and then raised in the slums of Limerick, Ireland, his mother, Angela, has no money for food because his father, Malachy, rarely works, and when he does, he spends his wages on alcohol.

From Malachy, however, Frank did learn to tell a story, and in Angela’s Ashes, he crafted a modern masterpiece with the richest dialogue and most memorable characters. In doing so, he has imparted the lessons of his unique life to millions of readers.

Personally, I listened to it on audiobook and found it to be an extremely immersive and unforgettable reading experience.

If you are doing an Around the World reading challenge, Angela’s Ashes is an excellent book to read about Ireland.

The Most Shocking Angela’s Ashes Quotes

Below are all the shocking Angela’s Ashes quotes categorized by theme:

First, below is the answer to the most frequently asked question about these Angela’s Ashes quotes:

What is the first line of Angela’s Ashes?

“When I look back on my childhood I wonder how I survived at all.”

“[N]othing can compare with the Irish version [of a miserable childhood]: the poverty; the shiftless loquacious alcoholic father; the pious defeated mother moaning by the fire; pompous priests; bullying schoolmasters; the English and the terrible things they did to us for eight hundred long years.”

“Michael . . . wants to know if we’re having fish and chips tonight because he’s hungry. Mam says, Next week, love, and he goes back out to play in the lane.”

“If there’s the odd flea [in the bed] I don’t mind because it’s warm in the bed.”

“Why should I squander money on stamps when I have two legs to deliver the letters myself?”

“Paddy Clohessy has no shoe to his foot, his mother shaves his head to keep the lice away, his eyes are red, his nose is always snotty. The sores on his kneecaps never heal because he picks at the scabs and puts them in his mouth. His clothes are rags he has to share with his six brothers and a sister and when he comes to school with a bloody nose or a black eye you know he had a fight over the clothes that morning.”

“You never know when you might come home and find Mam sitting by the fire with a woman and child, strangers. Always a woman and child. Mam finds them wandering the streets and if they ask, Can you spare a few pennies, miss? Her heart breaks. She never has money so she invites them home for tea and a bit of fried bread and if it’s a bad night she’ll let them sleep by the fire in a pile of rags in the corner. The bread she gives them always means less for us and if we complain she says there are always people worse off and we can surely spare a little from what we have.”

“I make sure no one is looking, grab a bunch of bananas outside the Italian grocery shop and run down Myrtle Avenue, away from the playground around the block and back to the other end where there’s a hole in the fence. We push the pram to a dark corner and peel the banana for the twins. There are five bananas in the bunch and we feast on them in the dark corner.”

“There are boys here who have to mend their shoes whatever way they can. There are boys in this class with no shoes at all. It’s not their fault and it’s no shame. Our Lord had no shoes. He died shoeless. Do you see Him hanging on the cross sporting shoes? Do you, boys?”

“A man without a collar and tie is a man with no respect for himself.”

“The woman behind the counter is pleasant to Mam in her American coat till Mam shows the St. Vincent de Paul docket. The woman says, I don’t know what you’re doing here at this hour of the day. I never serve charity cases before six in the evening. But this is your first time and I’ll make an exception.”

“They don’t want boys from lanes on the altar [at church as altar boys]. They don’t want the ones with scabby knees and hair sticking up. Oh, no, they want the nice boys with hair oil and new shoes that have fathers with suits and ties and steady jobs.”

“My mother is a beggar now and if anyone from the lane or my school sees her the family will be disgraced entirely.”

“She hopes he might bring home something from the farm, potatoes, cabbage, turnips, carrots, but he’ll never bring home anything because he’d never stoop so low as to ask a farmer for anything.”

“‘[T]is hard to hold on to the Faith with the snobbery that’s in it.”

“There they are, the priests and the nuns telling us Jesus was poor and ’tis no shame, lorries driving up to their houses with crates and barrels of whisky and wine, eggs galore and legs of ham and they telling us what we should give up for Lent. Lent, my arse. What are we to give up when we have Lent all year long?”

“The rain drove us into the church – our refuge, our strength, our only dry place.”

“Doom. That’s the favorite word of every priest in Limerick.”

“In New York, with Prohibition in full swing, he thought he had died and gone to hell for his sins. Then he discovered speakeasies and he rejoiced.”

“I want ye to go back down to that pub and read him out of it. I want ye to stand in the middle of the pub and tell every man your father is drinking the money for the baby. Ye are to tell the world there isn’t a scrap of food in this house, not a lump of coal to start the fire, not a drop of milk for the baby’s bottle.”

“The mothers of Ireland are always enemies of the first pint. My own mother tried to kill my father with a frying pan when he took me for the first pint.”

“[H]ere’s to your health and long life, Frankie, may you live to enjoy the pint but not too much.”

“I’m on deck the dawn we sail into New York. I’m sure I’m in a film, that it will end and lights will come up in the Lyric Cinema. . . . Rich Americans in top hats white ties and tails must be going home to bed with the gorgeous women with white teeth. The rest are going to work in warm comfortable offices and no one has a care in the world.”

“Isn’t this a great country altogether?”

“[I]f I were in America I could say, I love you, Dad, the way they do in the films, but you can’t say that in Limerick for fear you might be laughed at.”

“It was, of course, a miserable childhood: the happy childhood is hardly worth your while.”

“You have to study and learn so that you can make up your own mind about history and everything else but you can’t make up an empty mind. Stock your mind, stock your mind. It is your house of treasure and no one in the world can interfere with it.”

“Shakespeare is like mashed potatoes, you can never get enough of him.”

“Her face tightens and she’s angry. You are never to let anybody slam the door in your face again. Do you hear me?”

“Sing your song. Dance your dance. Tell your tale.”

“Rest your eyes and then read till they fall out of your head.”

“He says it’s different for a man. You have to keep the dignity. Wear your collar and tie, keep up the appearance, and never ask for anything.”

“There’s nothing worse in the world than to owe and be beholden to anyone.”

“It’s lovely to know that the world can’t interfere with the inside of your head.”

“Dad nods and puts his hand on mine again. He looks at me, steps away, stops, comes back, kisses me on the forehead for the first time in my life and I’m so happy I feel like floating out of the bed.”

“Love her as in childhood
Through feeble, old and grey.
For you’ll never miss a mother’s love
Till she’s buried beneath the clay.”

You have now finished reading all the most shocking Angela’s Ashes quotes.