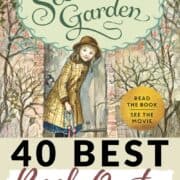 Get the best quotes from The Secret Garden book by Frances Hodgson Burnett about Spring, nature, magic, healing, facing adversity, and so much more.

The Secret Garden is a fictional easy classic children’s book that was first published by Frances Hodgson Burnett as a book in 1911, after being serialized starting in 1909.

The Secret Garden is about a 10-year-old orphan named Mary Lennox. After a cholera epidemic kills her wealthy British parents in colonial India, she is sent to England to live with her uncle in a very large and mysterious house.

At the outset, Mary is unhappy, but then she discovers a secret locked garden on the grounds of her uncle’s manor and befriends Dickon, one of the servant’s brothers and a free spirit who communicates with animals, and Colin, her uncle’s lonely and sickly son.

By way of tending to The Secret Garden, Mary redeems herself and gives Colin a new lease on life.

This post shares all the best quotes from The Secret Garden that make it such a timeless classic book for Spring for all ages to read, with the garden being a metaphor for the nature of life itself, and the essential need for all living things to be cared for.

Best Quotes from The Secret Garden

“If you look the right way, you can see that the whole world is a garden.”

“The Secret Garden was what Mary called it when she was thinking of it. She liked the name, and she liked still more the feeling that when its beautiful old walls shut her in no one knew where she was. It seemed almost like being shut out of the world in some fairy place.”

“Mary had never possessed an animal pet of her own and had always thought she should like one. So she began to feel a slight interest in Dickon, and as she had never before been interested in anyone but herself, it was the dawning of a healthy sentiment.”

“Two worst things as can happen to a child is never to have his own way – or always to have it.”

“It was the sweetest, most mysterious-looking place any one could imagine. The high walls which shut it in were covered with the leafless stems of climbing roses which were so thick that they were matted together.”

“And they both began to laugh over nothings as children will when they are happy together.”

“Hang in there. It is astonishing how short a time it can take for very wonderful things to happen.”

“When I was going to try to stand that first time Mary kept saying to herself as fast as she could, ‘You can do it! You can do it!’ and I did. I had to try myself at the same time, of course, but her Magic helped me.”

“Where you tend to a rose my lad, a thistle cannot grow.”

“She made herself stronger by fighting with the wind.”

“That afternoon the whole world seemed to devote itself to being perfect and radiantly beautiful and kind to one boy.”

“Of course there must be lots of Magic in the world,” he said wisely one day, “but people don’t know what it is like or how to make it. Perhaps the beginning is just to say nice things are going to happen until you make them happen. I am going to try and experiment.”

“In secret places we can think and imagine, we can feel angry or sad in peace. There is something to be said for just being, without worrying about offending anyone.”

“One of the new things people began to find out in the last century was that thoughts — just mere thoughts—are as powerful as electric batteries — as good for one as sunlight is, or as bad for one as poison. To let a sad thought or a bad one get into your mind is as dangerous as letting a scarlet fever germ get into your body. If you let it stay there after it has got in you may never get over it as long as you live.”

“I am writing in the garden. To write as one should of a garden one must write not outside it or merely somewhere near it, but in the garden.”

“But the calm had brought a sort of courage and hope with it. Instead of giving way to thoughts of the worst, he actually found he was trying to believe in better things.”

“Much more surprising things can happen to any one who, when a disagreeable or discouraged thought comes into his mind, just has the sense to remember in time and push it out by putting in an agreeable determinedly courageous one. Two things cannot be in one place.”

“When a man looks at the stars, he grows calm and forgets small things. They answer his questions and show him that his earth is only one of the million worlds. Hold your soul still and look upward often, and you will understand their speech. Never forget the stars.”

“Perhaps there is a language which is not made of words and everything in the world understands it.”

“And they both began to laugh over nothing as children will when they are happy together.”

“Perhaps out of pure heavenly goodness the spring came and crowned everything it possibly could into that one place.”

“One of the new things people began to find out in the last century was that thoughts — just mere thoughts—are as powerful as electric batteries — as good for one as sunlight is, or as bad for one as poison. To let a sad thought or a bad one get into your mind is as dangerous as letting a scarlet fever germ get into your body. If you let it stay there after it has got in you may never get over it as long as you live.”

“The robin flew from his swinging spray of ivy on to the top of the wall and he opened his beak and sang a loud, lovely trill, merely to show off. Nothing in the world is quite as adorably lovely as a robin when he shows off – and they are nearly always doing it.”

“However many years she lived, Mary always felt that ‘she should never forget that first morning when her garden began to grow.”

“Everything is made out of magic, leaves and trees, flowers and birds, badgers and foxes and squirrels and people. So it must be all around us. In this garden — in all the places.”

“You can lose a friend in springtime easier than any other season if you’re too curious.”

“One of the strange things about living in the world is that it is only now and then one is quite sure one is going to live forever and ever and ever. One knows it sometimes when one gets up at the tender solemn dawn-time and goes out and stands alone and throws one’s head far back and looks up and up and watches the pale sky slowly changing and flushing and marvelous unknown things happening until the East almost makes one cry out and one’s heart stands still at the strange unchanging majesty of the rising of the sun—which has been happening every morning for thousands and thousands and thousands of years.”

“It is the sun shining on the rain and the rain falling on the sunshine, and things pushing up and working under the earth.”

“When new beautiful thoughts began to push out the old hideous ones, life began to come back to him, his blood ran healthily through his veins and strength poured into him.”

“I am sure there is Magic in everything, only we do not have sense enough to get hold of it and make it do things for us.”

“But of course he is doing now of his own free will what we could not make him do before.”

“It made her think that it was curious how much nicer a person looked when he smiled.”

“As she came closer to him she noticed that there was a clean fresh scent of heather and grass and leaves about him, almost as if he were made of them.”

FAQs About Quotes from The Secret Garden

What is the first line of The Secret Garden?

“When Mary Lennox was sent to Misselthwaite Manor to live with her uncle, everybody said she was the most disagreeable-looking child ever seen.”

What is the main message of The Secret Garden?

The Secret Garden is about how living things, including both nature and people, need to be nurtured in order to survive, and how the unselfishness of tending to living things can bring both joy to the giver and health to the recipient.

Those are all the best quotes from The Secret Garden.